A block long section of the concrete jungle has turned green in Kaohsiung. Clearly a lovely test project for urban gardens, the sidewalk nature trail is a nice contrast to the surrounding marina neighborhood area of the city.

A tunnel of green love. 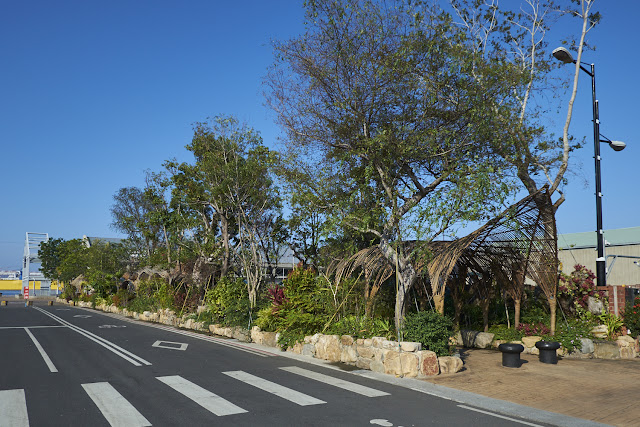 It ain't no row of potted plants and calling it a day. The green space looks like a mini botanical garden, complete with a babbling brook and waterfall.

Squint and you've been transported to the jungle. 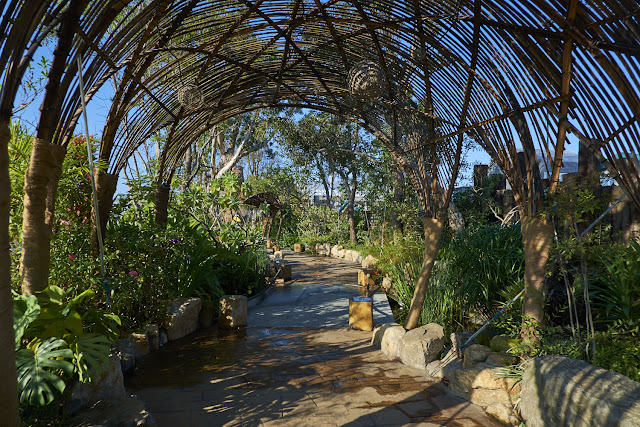 Look another way and a city parking lot is just beyond the sidewalk. Better to enjoy the gingers.

Heading out, the city and a big Chinatown gate start to come back into view. Thanks for the natural cleanse! 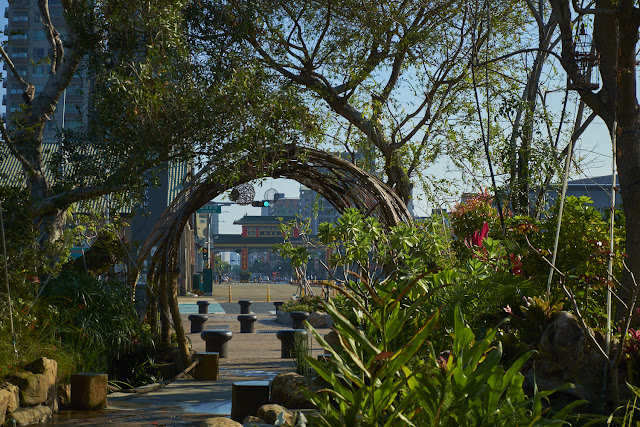 Qing Shui Temple is one of more than a dozen temples around Lotus Lake in North Kaohsiung. What helps it stand out is the level of craftsmanship in its decoration.

The temple, built in 1787, is devoted to Master Qing Shui, who fought against the Yuan army. Reaching waay back for inspiration.

Temple front, looming rooftop sitting Buddha looking down on everyone. 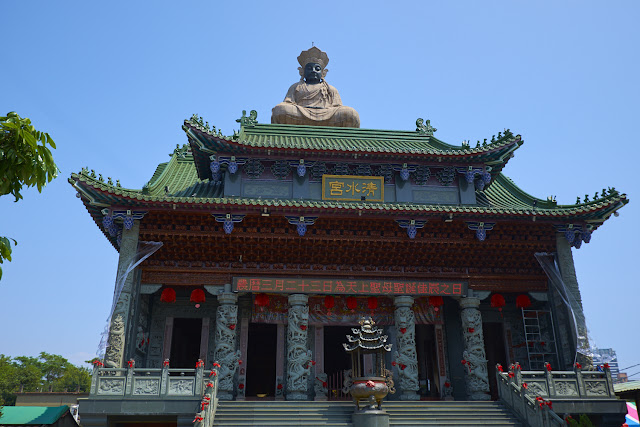 Heading in. Check the sign scroll for the latest announcements. The big boy. 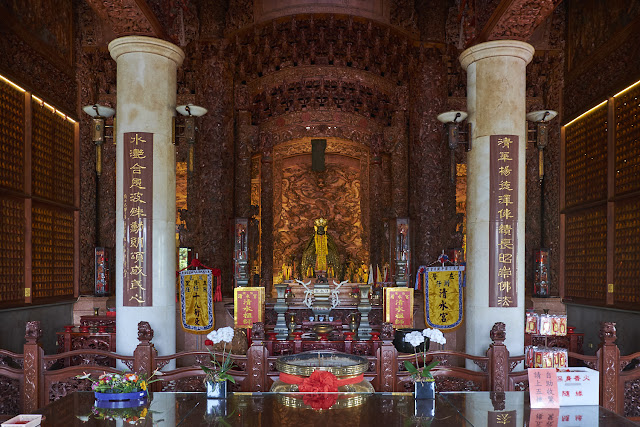 Looking up won't help to avoid the carved wood, the temple is dripping with it. Impressive. More wood work in one of the altars.

Upstairs is a funky prayer area with columns and dragon, chicken sculptures made from Chinese porcelain dishes. Radical. 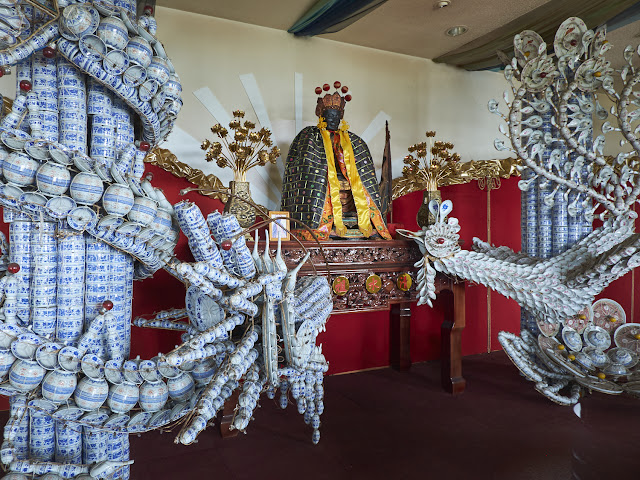 For a photographer, the eerie stillness offered its own beauty. 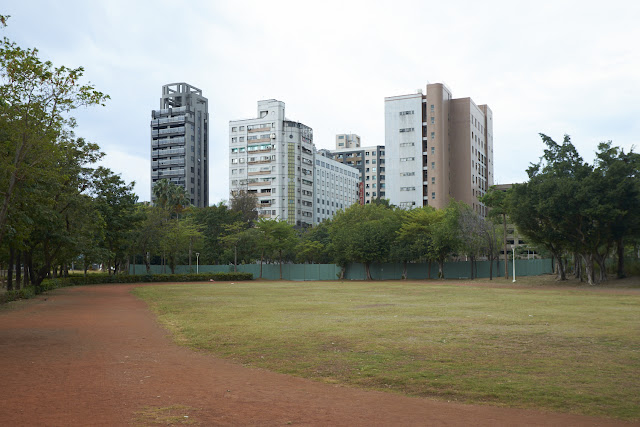 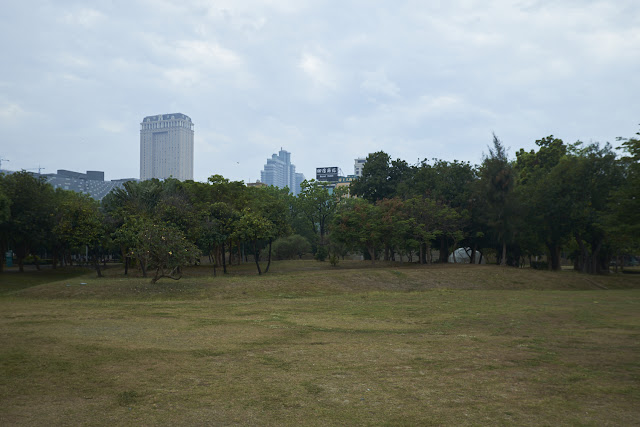 Parking lot, cars give themselves some orderly space. Old railroad yard, turned into a park, waiting for life.

A wall of apartment buildings in a suburban area of town. 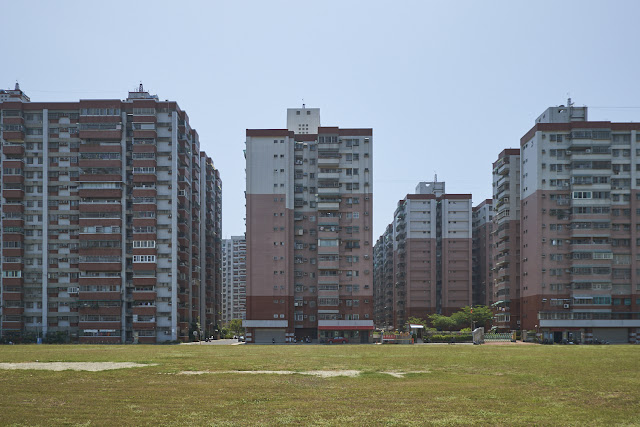 The highlight of all the Lotus pond area sites are the Dragon and Tiger Pagodas. Somehow they combine classic pagoda tower architecture with giant, garish figures. Quite the juxtaposition. 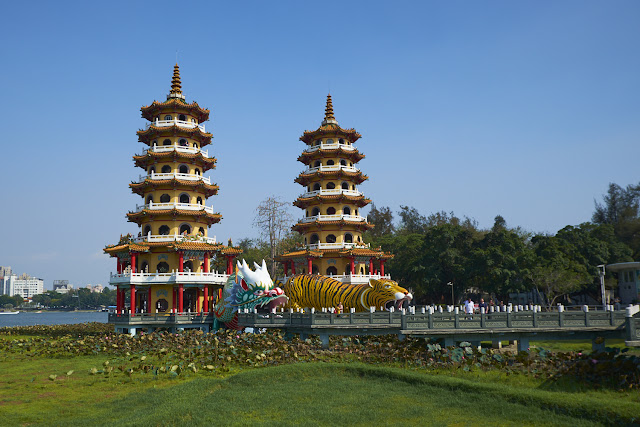 The dragon and tiger are huge and you need to walk into the dragon and out of the tiger to see the complex. Force feeding.
Oh boy. Inside the dragon, a regular house of Buddhist horrors unfolds. Let's start by slicing you like deli meat. 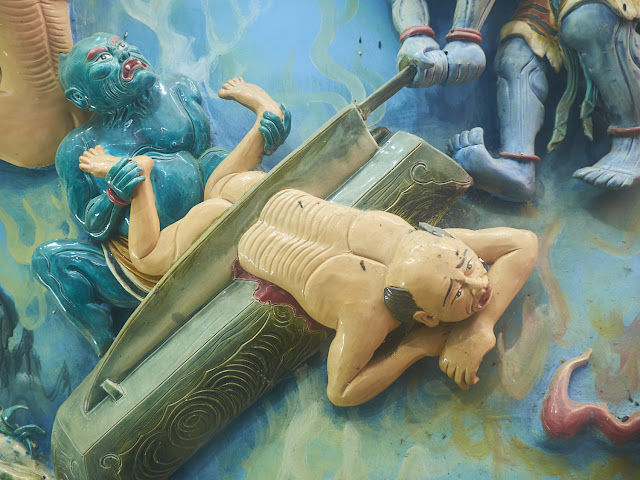 Personal behavior run amok. "Does my breath smell or is that your feet?" Inappropriate breast feeding.

What's the point? Seems you need to wrestle a tiger if you hope for salvation. 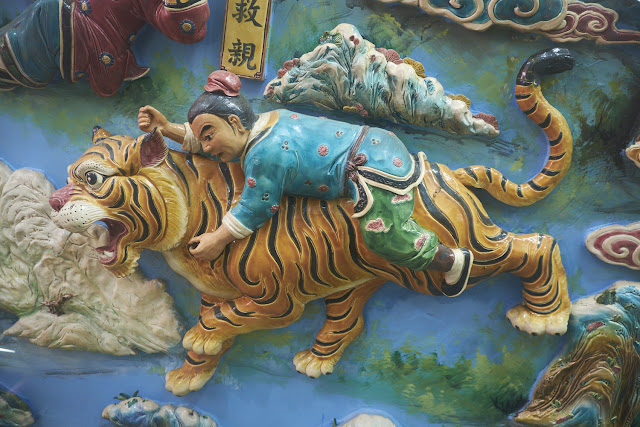 Not a he-man yet? Fine, time for more pounding. But why is a cuddly deer just hanging out on you? "Too much talking, the tongue now comes out!" 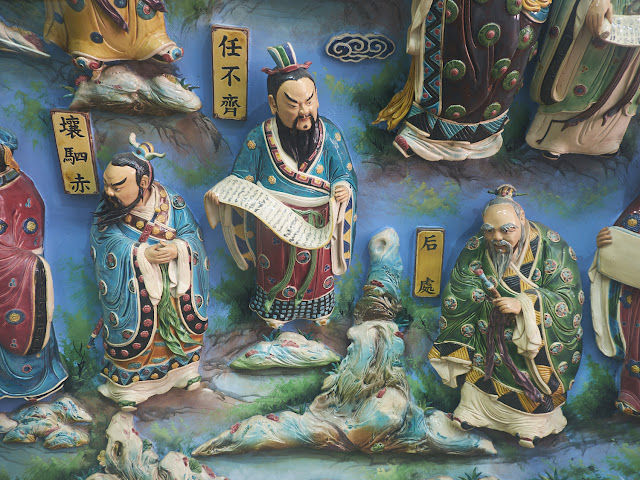 Some on purpose, some just by straight design, fun signs can be found around town in Kaohsiung.

In the Pier 2 arts district, co-opting one of the main sculptures for a sign. Do not cross the dragon monster. 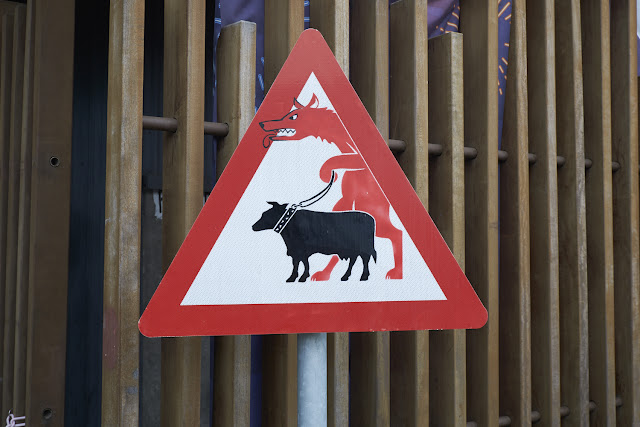 Before and after, serious and silly. Falling rock sign and the artsy version. 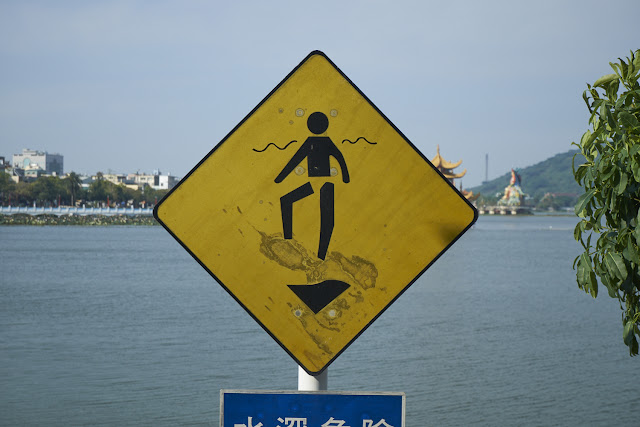 Man messing with a Dead End sign. If your town has cute, little cargo trucks, you can create a sign to ban said cute cargo trucks.

The real fire hydrant sign, no doubt you're in Chinese territory. 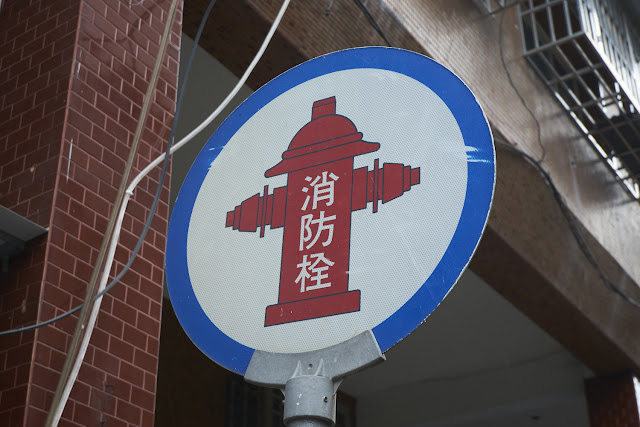 Sometimes, you want a gimmick. Maybe you have a typical Chinese Buddhist temple, how can you make it stand out, attract a crowd? Go big. 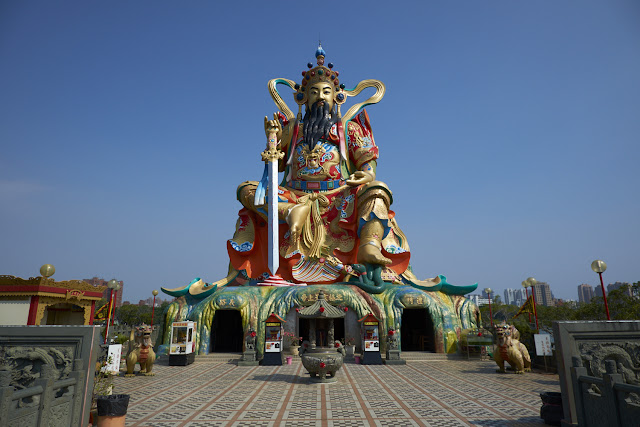 Wow. He's a heavy, with his own pier in Lotus pond. Hello Xuan God.

Inside the big boy, a more traditional altar and a little fantasy ceiling painting.

More painting, squint and you can see the light fixture nicely incorporated into the design. 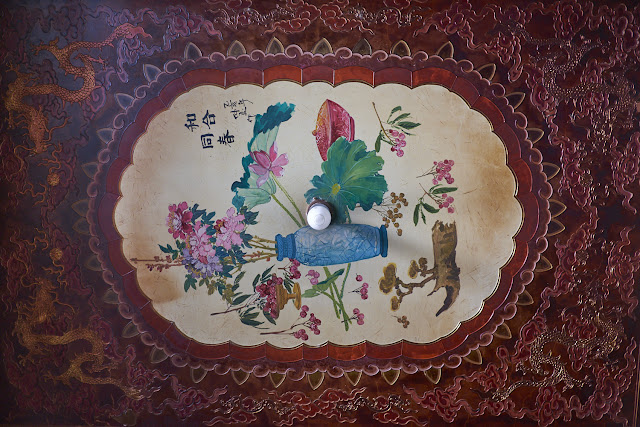 One more painting. Cute animals are always an easy sell. Speaking of selling, there are a bunch of religious vending machines around the complex. Creepy drummer boy.

You can get your fortune from this woman. 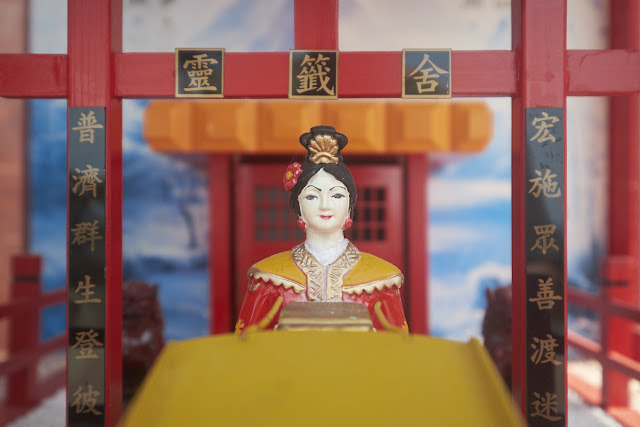 Diorama Illustrating The Brutal 228 Incident At The Kaohsiung History Museum

One of Taiwan's darkest moments in recent history is something called the 228 incident. It is named for February 28, 1947, the date anti-government protests erupted over unfair treatment, random searches and a general brutality showed toward citizens. The uprising stemmed from a widow being charged for possession of contraband cigarettes. Enough is enough and the protests started.

Between 5,000 and 28,000 people died in the subsequent riots and government crackdown. In Kaohsiung, when protesters headed to city hall, they were met with pre-empted gunfire and many people were killed.

Kaohsiung's city hall is now the city's main history museum and they've constructed a large, elaborate diorama that illustrates the night of the massacre. Besides the sadness of the event, the feeling is amplified by viewing a diorama of the building while inside the same building. Witness to history, as close as one can get.

The diorama has its own artistic beauty and the details start to unspool the narrative of that terrible night. 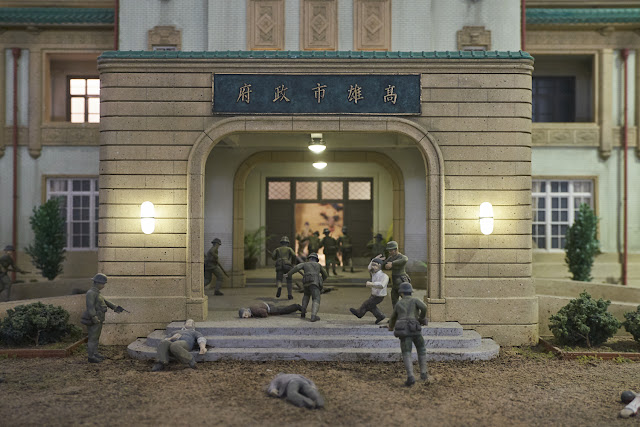 Watching the carnage. A soldier heading inside. 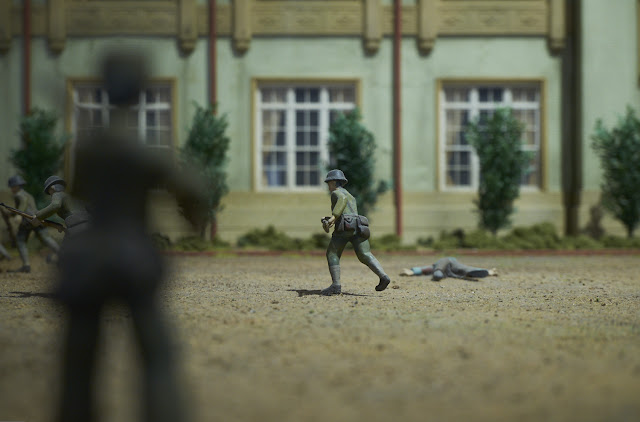 Flee or be shot. 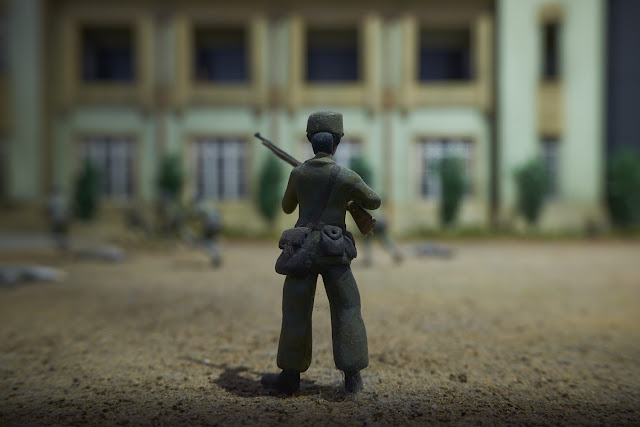 A passerby on his bike bears witness. The shooting continues. 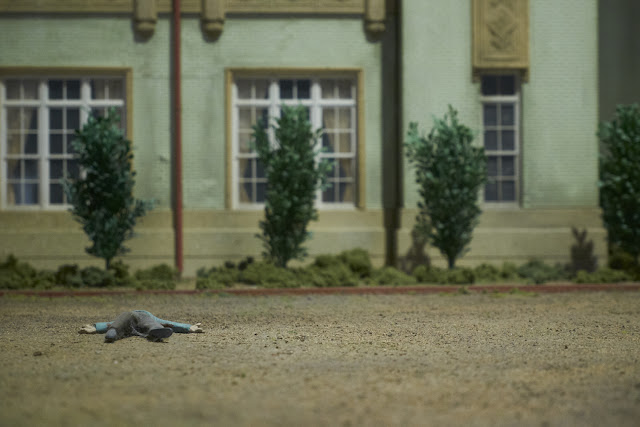