Nothing like getting out, walking around and seeing what surprises there are to see. Bring it, Bangkok.

Need a sticker? This guy, evidently, has you "covered." 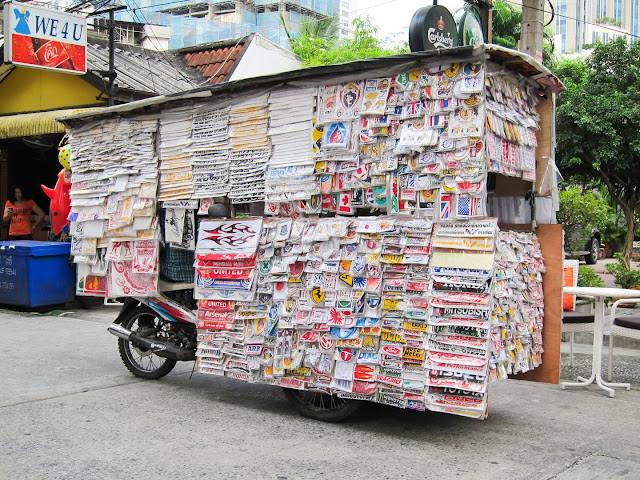 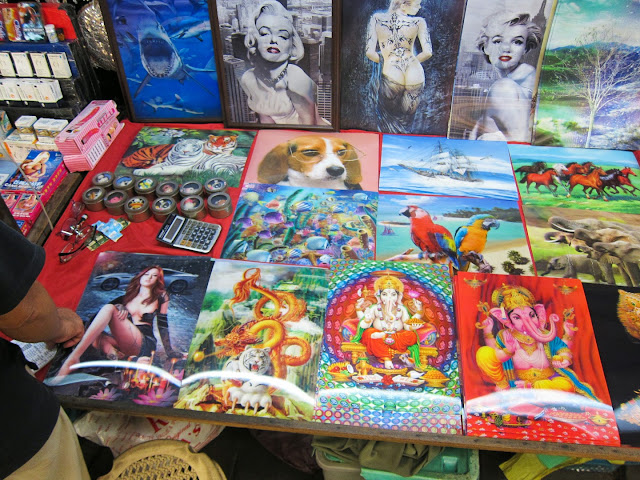 Time to get something to eat, the stalls always filled with interesting food and a casual delivery setup.

Buddhist for the backyard? These guys aren't the real thing, but verrry good imitations. Crossing the creepy line a bit?

How about an egg? See the egg man. You want pink? They've got pink.

Now time for a drink. Beautiful, the bar van just pulled up and is open for business. 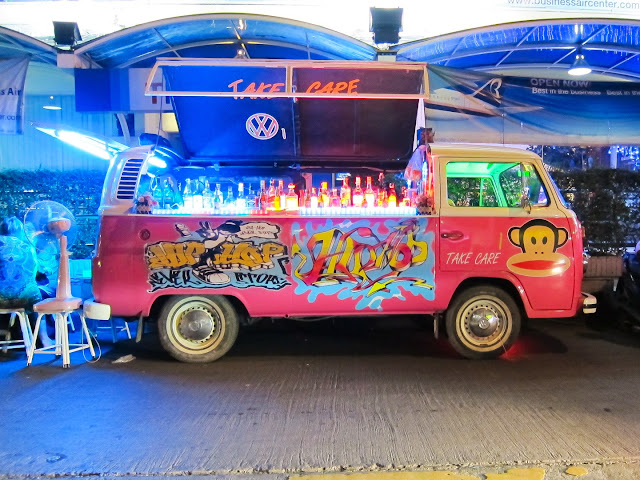 Tucked awkwardly among the modern urban sprawl of Bangkok sits the grounds of the Kamthieng House Museum. It's part of the headquarters of the Siam Society, a group established to promote the traditional culture of Thailand.

The house, built in 1848, is actually from up north, Chang Mai province. The Society moved the house to Bangkok in order to give greater exposure to that style of architecture and way of life.

The house, transplanted among the modern malls and skyscrapers of Bangkok. It used to be along a river, hence the stilt design. 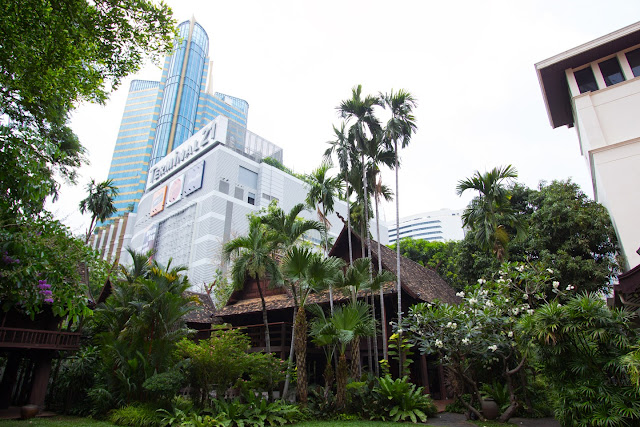 Inside one of the wings, a traditional kitchen. Traditional textiles.

A modest bed. The things mounted beyond the bed are various examples of traditional cushions. Throw them on the floor and instant back support. Unfold and instant bed. 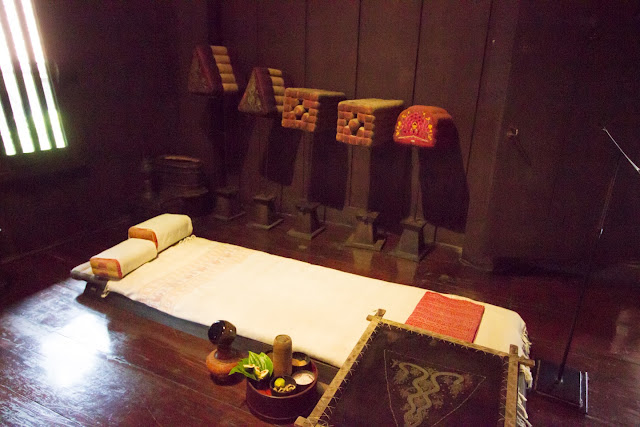 Glad you asked. Sure, you can get your can of Pringles, the junk food found most in the world. But let's take a look at some of the regional goodies.

Give me Big Sheet! Give me Big Sheet! OK, are these cute guys scarfing down seaweed as fast as they can or is it going the other way? We especially love the two fish popping off the seaweed on the middle package. "Swim for your lives!" 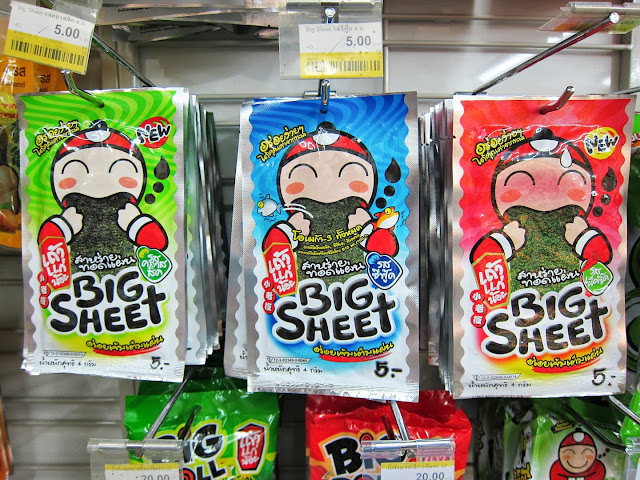 You shop to get the "essence" of a foreign land. How about a little chicken or super fruit?

Does it matter if you can't tell what they're selling? Now you can read the shelf as if it's an Anime comic book. 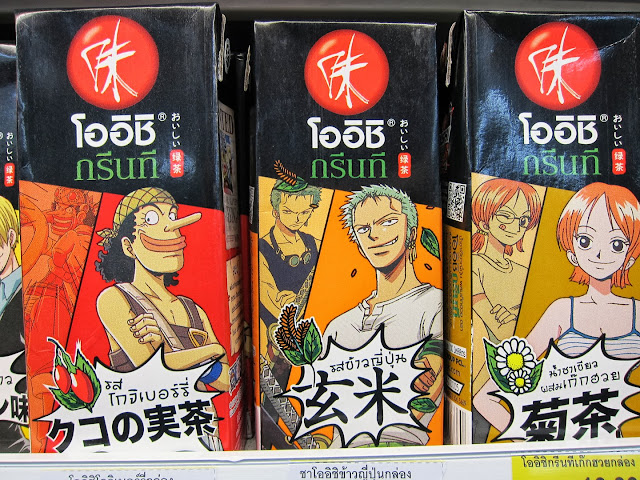 Disney's Stich is still busy in Asia. This drink is so smart it doesn't need an R.

Soy milk is a tough swallow for some folks. And now you add a tofu sheet? Pass. How about a drink in a plasma bag?

We don't care how cartoony they made the mascot, it's still sheets of squid. Back on land, a new version of a roll up. Sandwich anyone?

Bangkok is filled with Wats (Buddhist temples) and the most impressive is Wat Arun. It's right along the main Chao Phryaya river and acts as a landmark for the city.

The temple has existed since the 1600s, but the impressive spires were added later, in the 1800s.

From the river, the more than 200 foot tall central prang dominates. 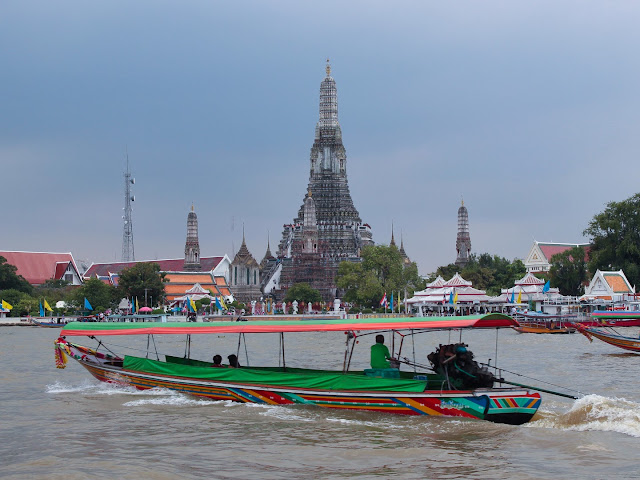 The details are great, whether from a distance or close up. Broken porcelain tile encrusts everything. 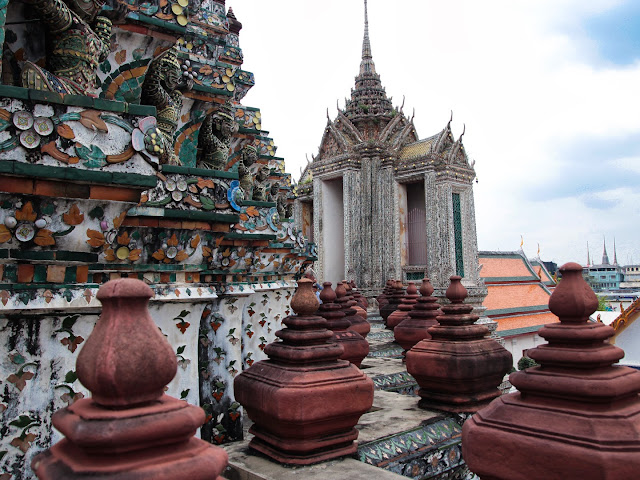 Busy enough for you? There are little moments of respite from the endless, busy tile work.

Oops. We did not shake his hand! One more look at the grand prang.

It's all not just old architectural wonder at the temple, you can also play a traditional Thai dancer. 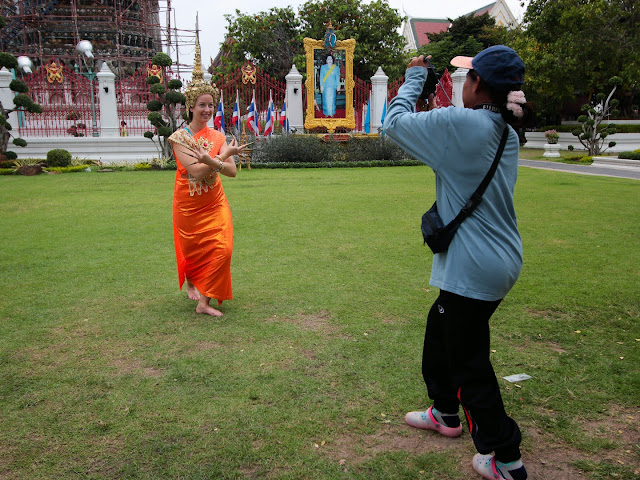 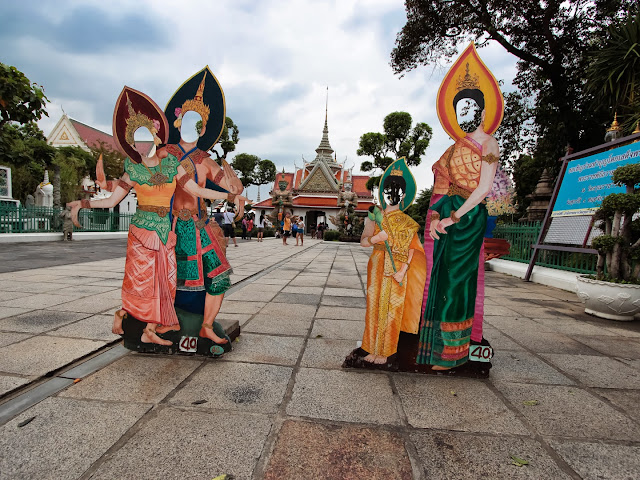 Doing Your Dental In Bangkok

Say you want to look like this, but can't afford to go into a place like that? 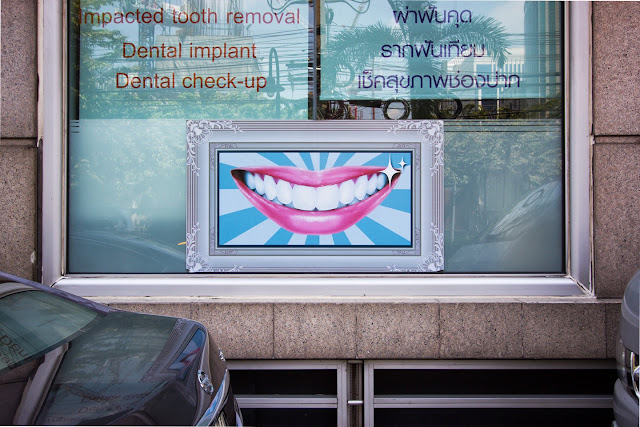 Hit the streets and find what you need. Maybe you start here. 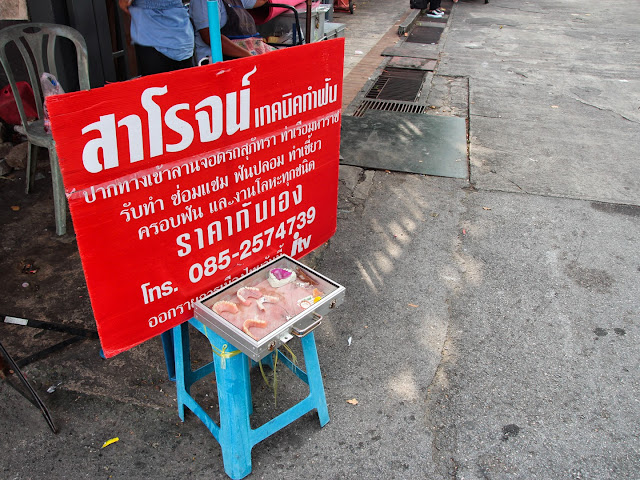 Or patronize this woman. All over the streets of Bangkok there are friendly vendors more than happy to fit you for dentures, bridge work, whatever you need. Grab some street food and then re-do your whole mouth. 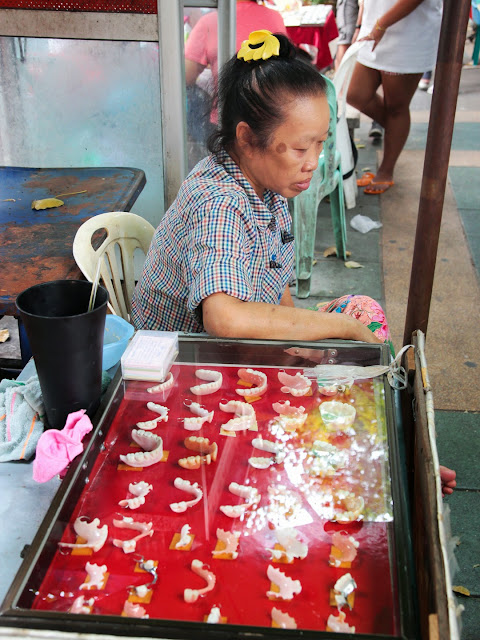 The Ancient City Of Auytthaya

An hour or so train ride north of Bangkok lies the ancient capital city of Auytthaya. Located on the Chao Phraya river, the old city was a booming capital quickly after its establishment in 1350. A million people lived there by 1700 -- the largest city in the world at that time. Then the Burmese showed up and sacked Auytthaya, burning most of it down.

There's still an active city today, but most of the ruins have been respectfully left. You can grab a tuk tuk or bicycle and wander among the partial temples. 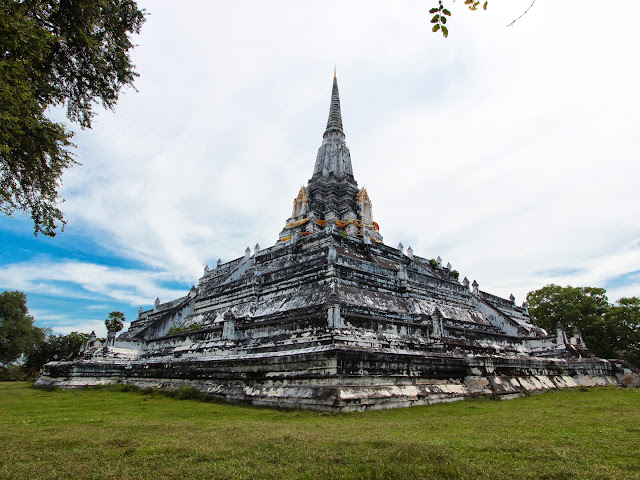 How can you tell how busy a temple is? By the abundance of burned candles and hanging money.

Modern temples are also around. 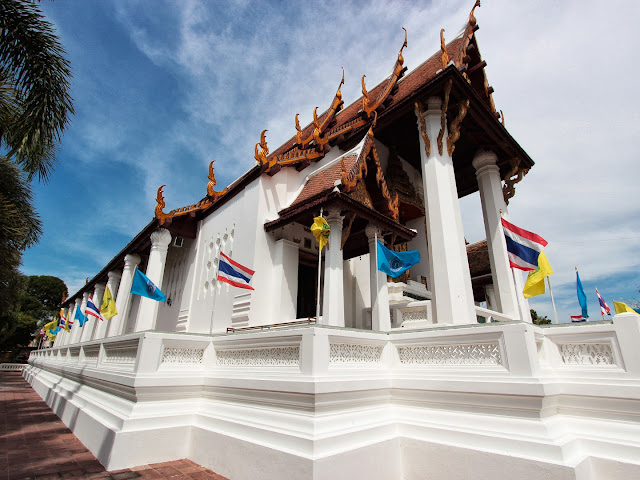 Buddha sees everything. And we mean everything. Still tempting fate? Buddha has quite a posse watching his back. Do not mess with Buddha.

The town is overrun with chickens - small to giant sculptures. In front of stores, houses, in the medians, it's all about the fowl. 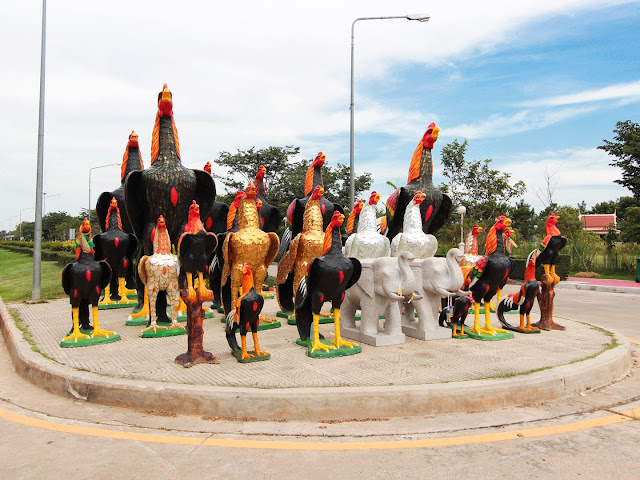 A little shrine inside a temple, made from various toy store objects - so cute! Temple hopping gets hot, bring your sun umbrella.

The impressive ruins of Wat Chaiwatthanaram. 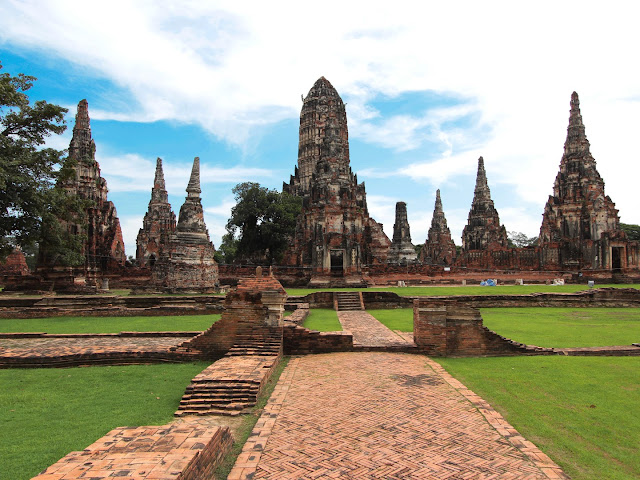