Ipoh's main landmark is a central clock tower. It was constructed by the British in 1909 to commemorate James Birch, the first British resident in Perak, the state for which Ipoh is the capital. The clock itself is nice, but the real interest are the four panels that depict the growth of civilization, at least how the British saw it in 1909. Some hubris included. 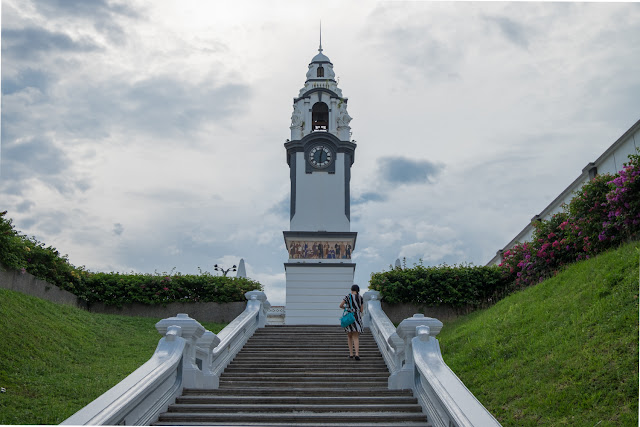 Panel A, ancient human ages. You get a hunter, fisherman and on to the civilizations of Egypt, Persia, etc... 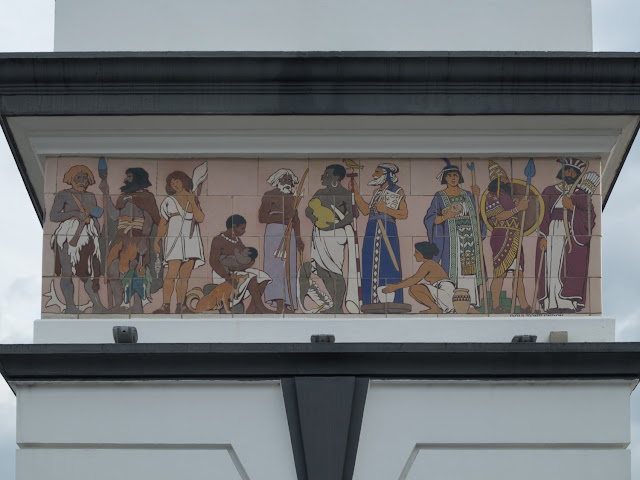 Panel B, religion in the Mid and Far East, Greeks, Romans. 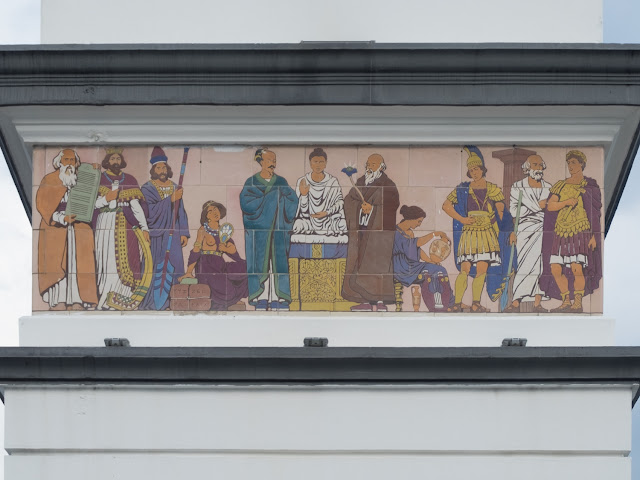 Panel C explores the Middle Ages, the Renaissance and up to Shakespeare. Mohammad makes an appearance. Oops. Everyone knows it's forbidden to present a likeness of Mohammad. Once muslim Malaysia gained independence, it scrubbed the image. 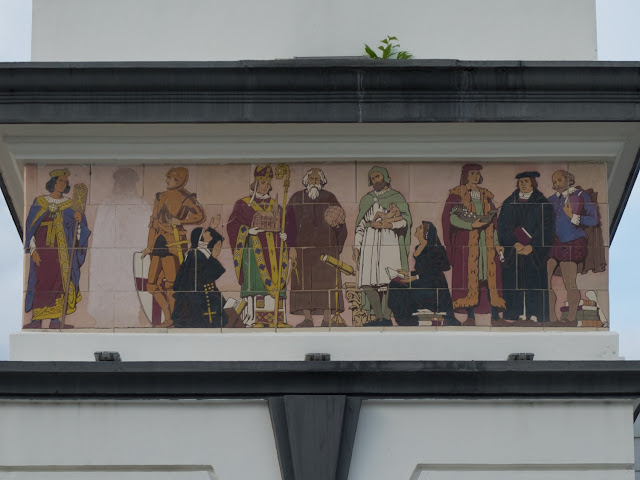 Panel D, a sprint from Isaac Newton into the modern age. 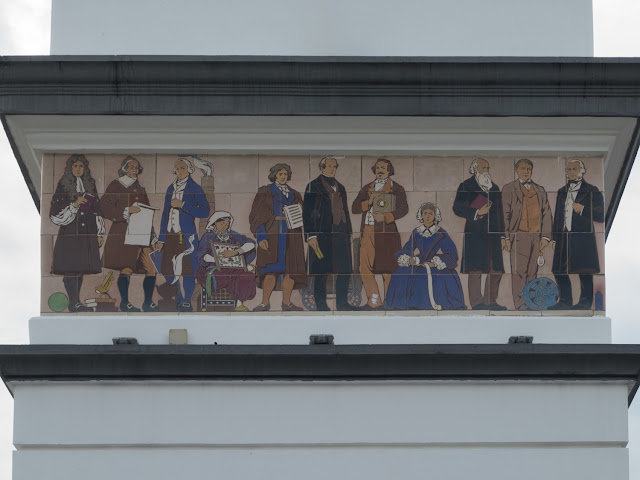 It's quite a history lesson to glean when you just want to know if you're late for lunch. One more view of the clock tower. 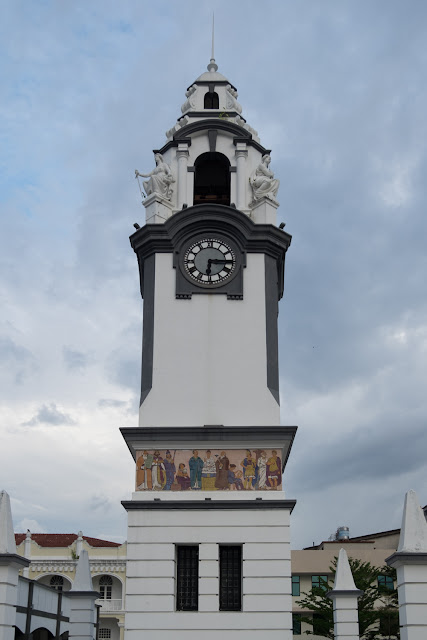 People And Places In Ipoh

Time for an aimless walk around Ipoh, to see its people, locations and maybe a stop for some nourishment.

School kids attending a Chinese funeral. They're waiting their turn to go pay their respects. 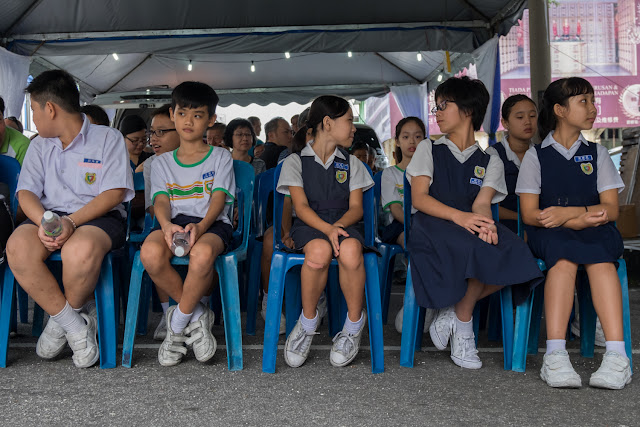 Men and their shops.

The British era, still a presence. Lunch time. Ipoh white coffee and dim sum, is there a better meal? A rhetorical question, the answer is no. The garlic seller.

Vendor at a bus station stall. 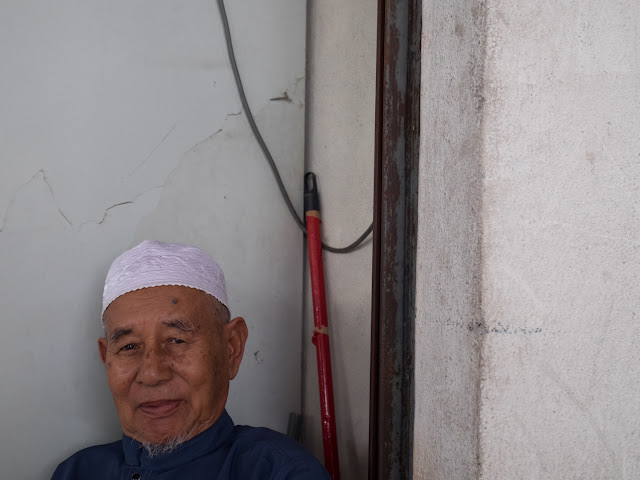 The dry goods lady. Someone described her as having "natural" hair. 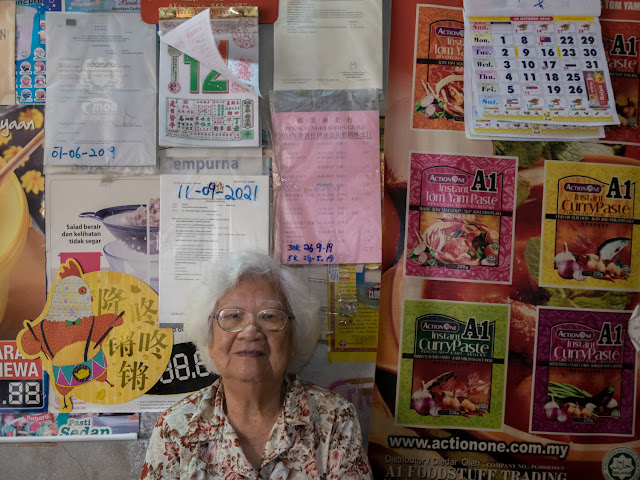 A Look Around Ipoh

Ipoh is a mid-sized town in Malayasia, an historic city, built from tin mining and featuring some iconic British era colonial architecture. The mines are closed and the British have moved away, leaving behind hints of their history through the old buildings. 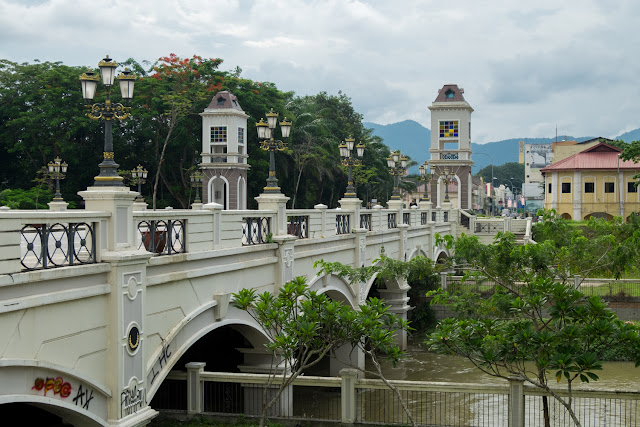 Main train station. Ipoh is inland and the British needed a major rail line to move all the tin to the coast for further transport. 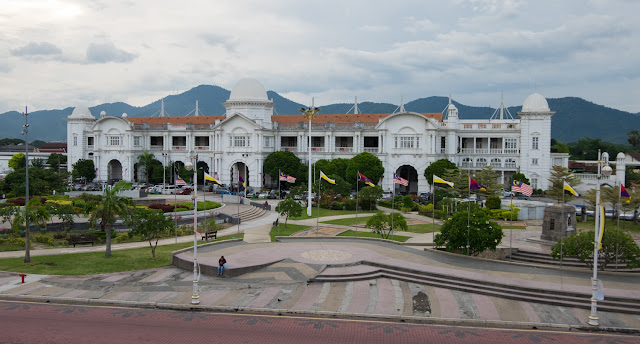 Moving on in time, ever-present mosques.

Fountain in a central park. 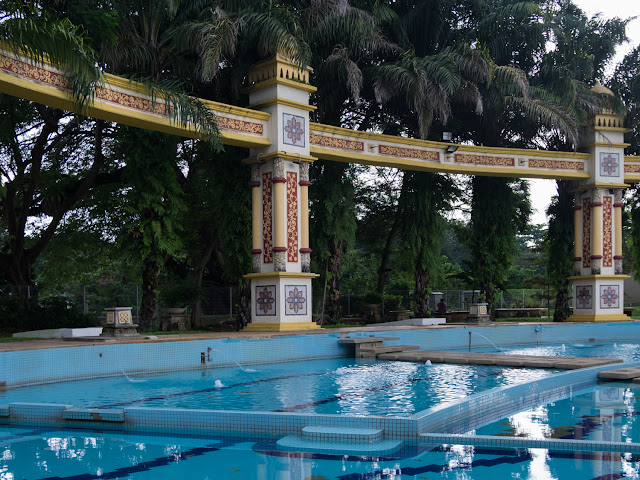 Progress and pride, new building pushing out old neighborhoods and showing patriotism on a government building.

Ipoh today, not afraid of a color statement. 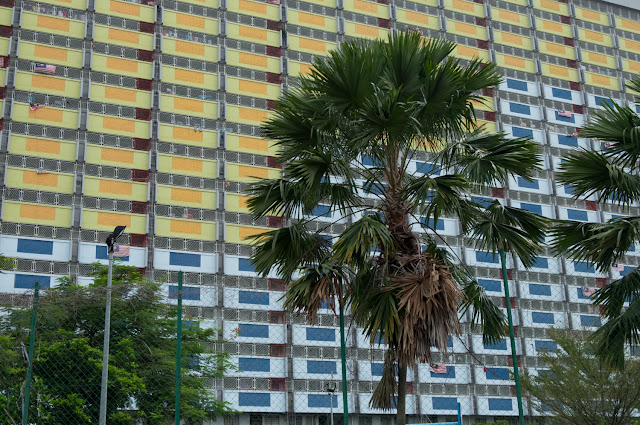 Perhaps the greatest attraction on Earth, the galaxy, the solar system, throw in a few black holes, a universe or ten. Or maybe just a roadside eyesore in Wellington Mill, Australia. 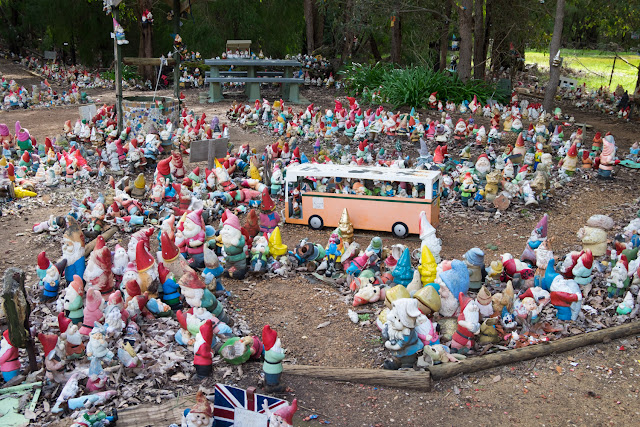 The place, of course, started organically. Something about a traffic circle and a woman leaving a gnome. And then more gnomes. And then the gnome word got out and gnome donation became a thing.

A gnome playing the local game, footy, Australian rules football. People are organized when they visit, leaving a pre-designed display that might commemorate a family highlight, social club, whatever. 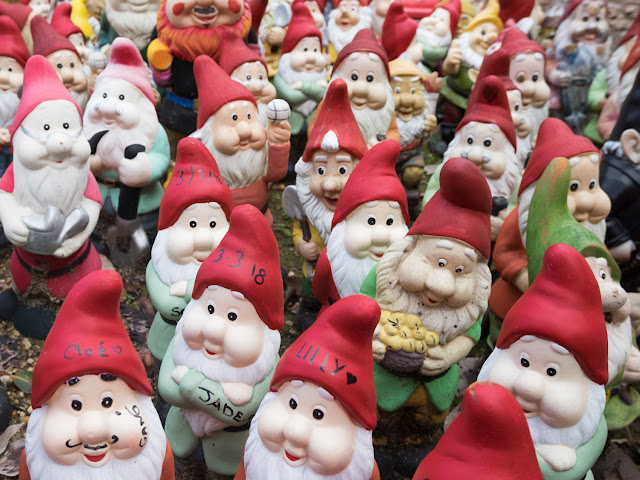 A gnome named for thee. Gnomes can take all sorts of forms and expressions. Turkish squirrel?

Ugh oh, the gnome-ageddon is upon us. 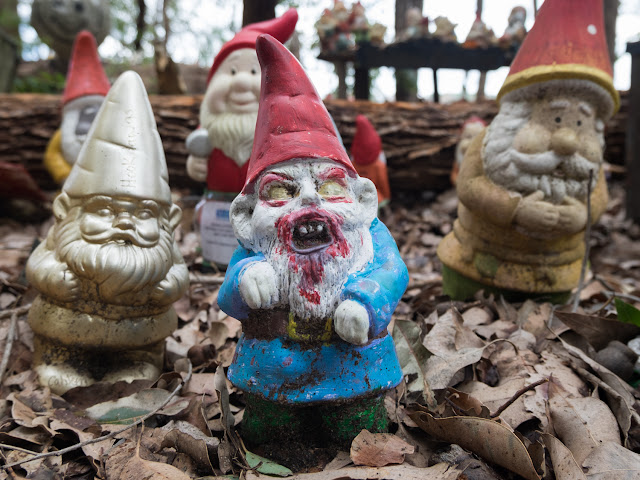 Jokes abound, as you can tell from this blog post. So gnomey opportunities. Gnomes can be Jewish, who knew?

A little romance among the gnomes. 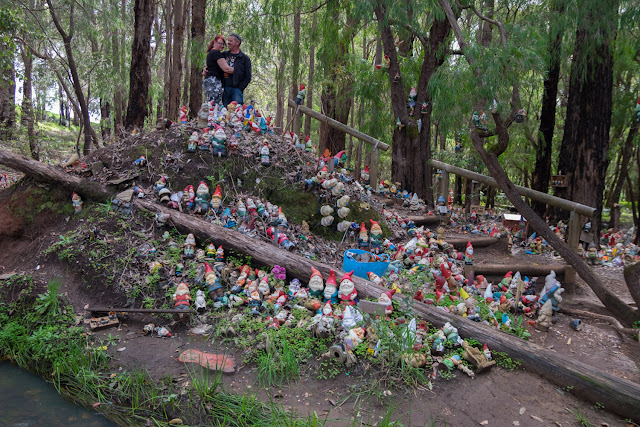 A Day In Margaret River

Margaret River is wine country in Western Australia, full of beautiful countryside and coastline. It all sets the mood to get outside before going to taste cases of wine. 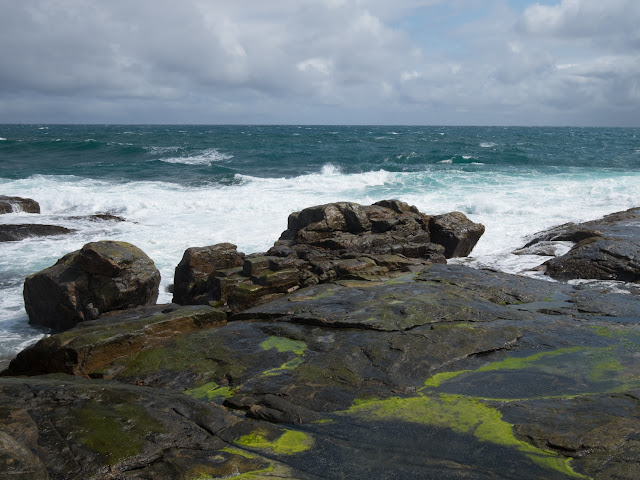 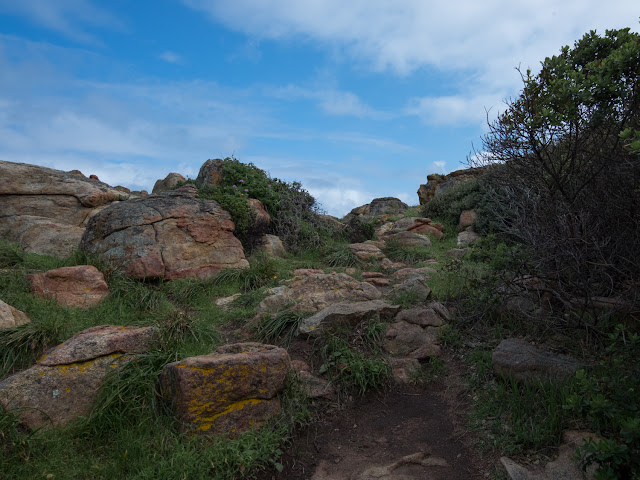 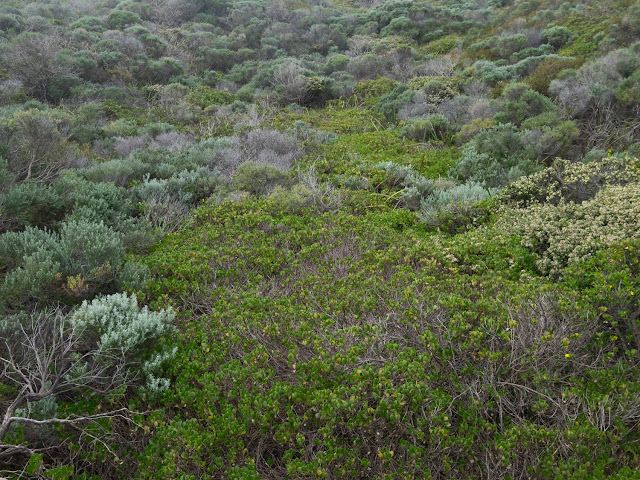 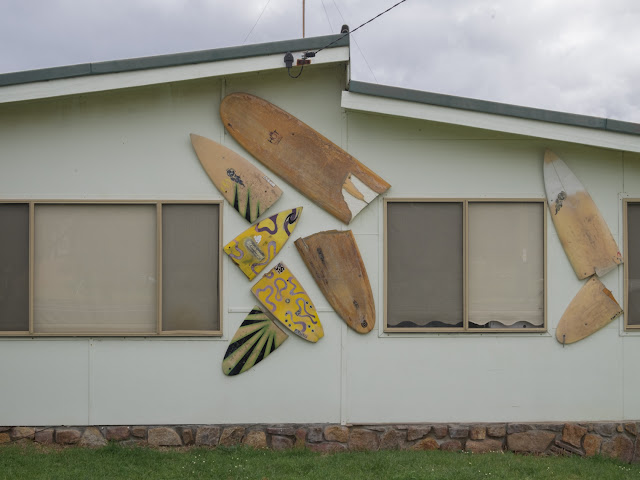 Lots of fauna to see if you take a week or so road trip through Western Australia. Let us count the animals.

Confident cows in the rain. 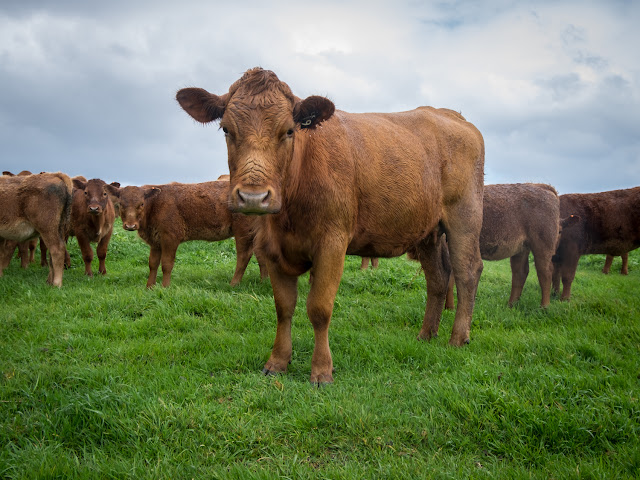 Ram, ready to get his butting on. 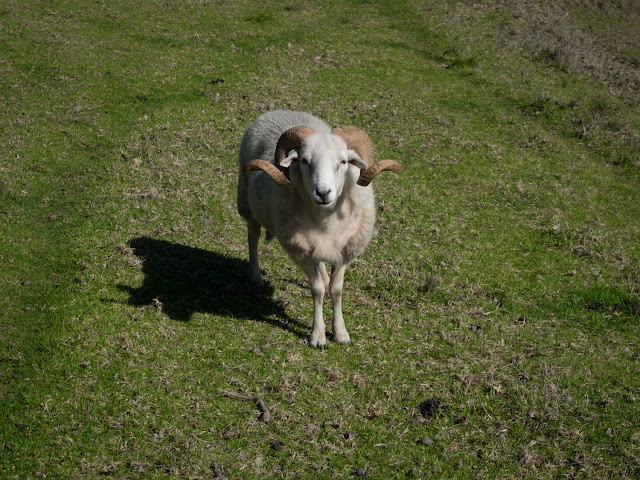 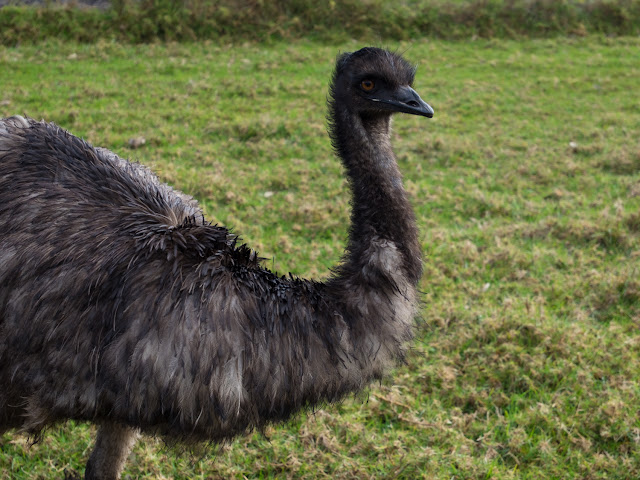 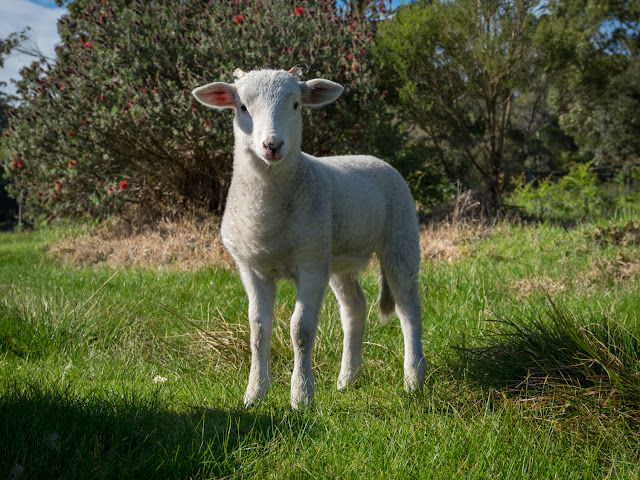 Curious kangaroo, at least the little one, safe with a pouch view. 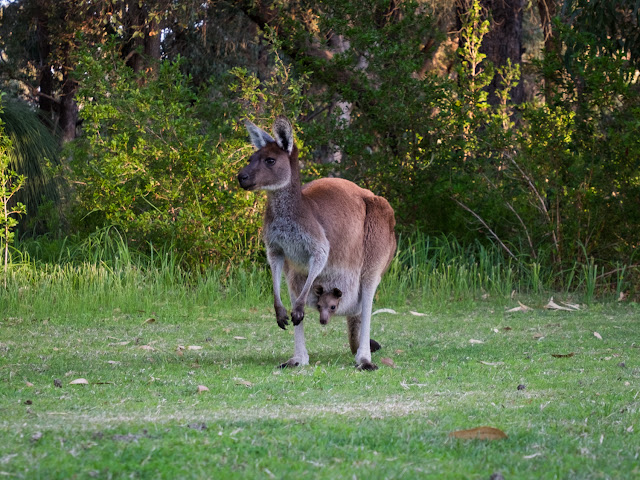 Tickled By Tingle Trees At Valley Of The Giants Treetop Walk In Walpole, Australia

Time to see some big boys (girls?). In Southwest Australia, you can head to a park full of giant tingle trees and take a canopy walkway 40 meters above the ground. Think sequoia trees scale with a modern metal walkway in the sky.

Down on the ground a little (big) preview of the tingle tree scale. This one is called grandma, for all the wrinkles. Sexist! 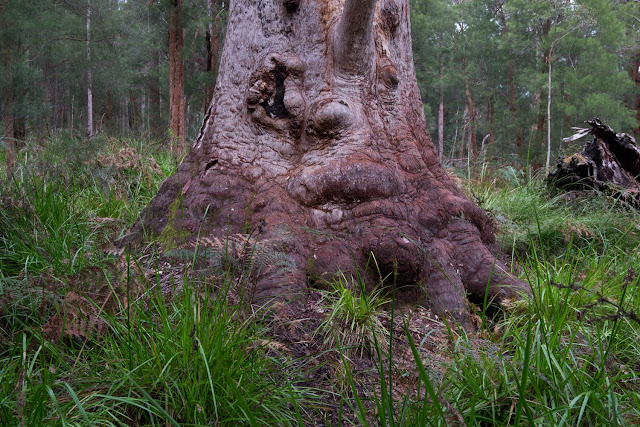 Heading up and up. 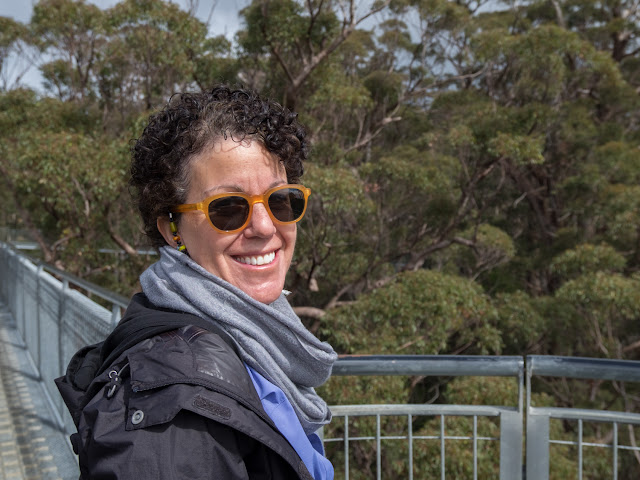 The bridge walkway is an engineering delight, a lightweight, aluminum design with a clever underside-trellis framework. Sarah, tree driving. Seems there used to be a tingle tree large enough for a road. Now, the tree is gone, the road re-created as photo-op.

The view from the top, impressive. 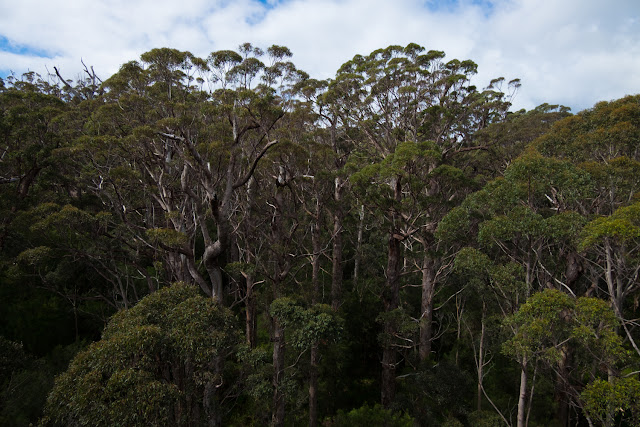