Putting A Damper On Taipei 101

When you build a tower 1,600+ feet tall, a little bit of wind goes a long way at the top. Motion sickness can be a real problem if you're working on the 80th floor. Isn't work tough enough to stomach? What to do?

Bring in the damper. Many modern skyscrapers employ a system based on counterweights and movements. The damper hangs inside the top of a skyscraper and pulls when the wind pushes.

For Taipei 101, at a zillion tons and 101 stories, we're talking a huge marble. Usually building dampers are off limits for the public to view. Taipei 101 seized on the marketing potential of the big boy and has it proudly on display. 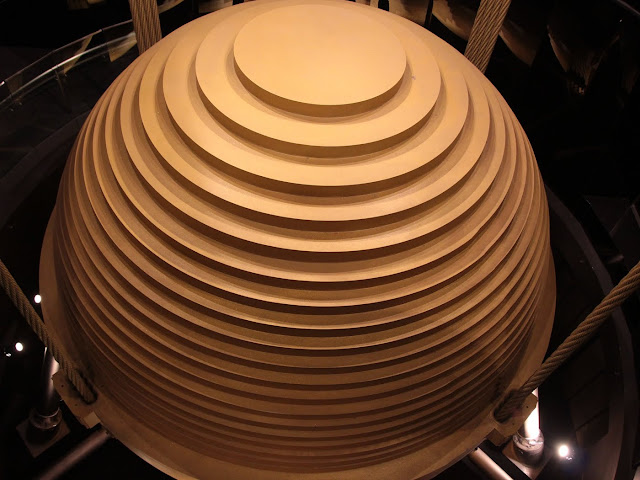 That's a big baby, with mascot and stats (reading like a damper-themed centerfold questionnaire) to back it up. Good to know.

The damper actually is an impressive piece of engineering, a huge steel-plated ball hung by cables and steadied by a hydraulic gimbal mechanism.

Go big or go home. Taipei chose the former in 2003 and ended up with the world's tallest building at the time of completion. The tower has slipped a couple of notches to third, but you'd have to be a height snob not to be impressed by its presence.

Taipei 101 is indeed 101 stories, a lucky number to the Chinese. It rises to a height of 1,670 feet, for those geeks measuring at home (like James). 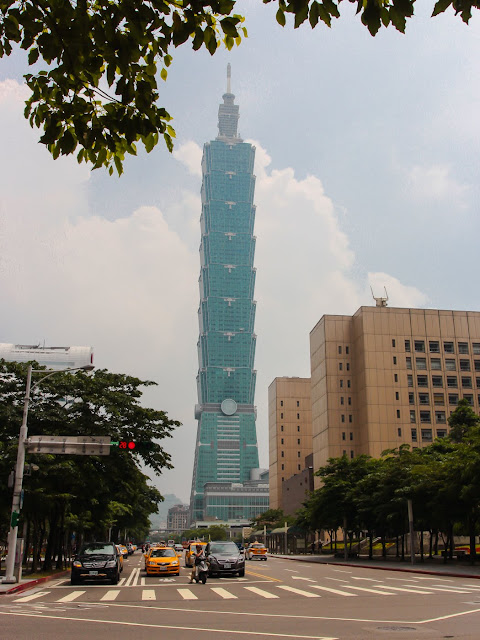 More impressive up close, when one starts to realize the (over) scale. Typical of modern skyscrapers, the base starts with a giant shopping mall. An entrance awning, a nod to Asian architectural heritage.

The building has to start somewhere - a corner. The graphic in the elevator, gobbling floors like a video game.

Room with plenty of view. That's city hall to the left, the tan building with the H helipad on the roof. From this angle, you get a good impression that Taipei 101 is built way beyond the height of anything else in the city. Ho hum, the view from our cell phones is much more exciting.


Another look at ground level, emphasizing the tower's skyline dominance. 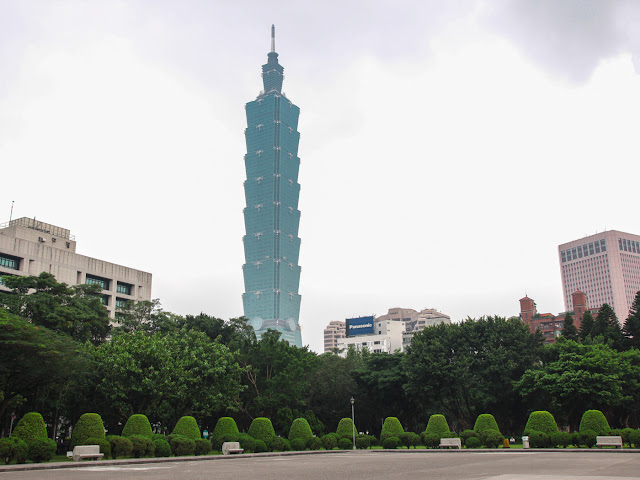 Getting Your Goat In Old Delhi

It's an urban jungle in Old Delhi and goats seem to rule the place. You can't go a block without seeing one, usually tied up and harnessed from spreading mayhem. 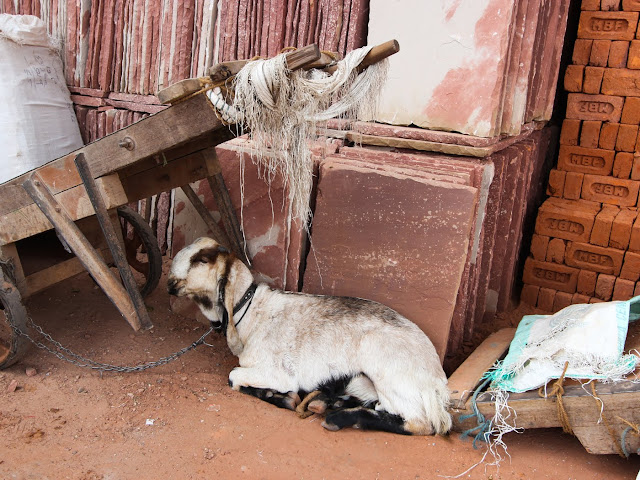 Some of the goats display an interesting breed mix. Maybe some rabbit and hammerhead shark in this goat's background? Or a Dalmatian dog somewhere along the line for this goat?

Delhi gets cold in the winter, make sure to treat your goat well. How about a sweater? 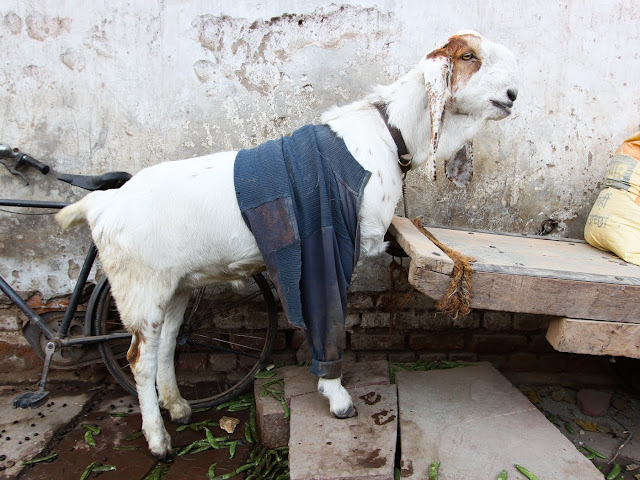 Late Mughal anyone? Safdarjang's tomb was built more than 100 years after the Taj Mahal, but it hasn't improved on that great forebearer. It's not as grand or placed in such an impressive location, an indication of the waning days of the Mughal empire. Hey, downsizing happens to everyone eventually.

As usual, an entrance gatehouse, making sure the tomb teases you and then rewards once you emerge. 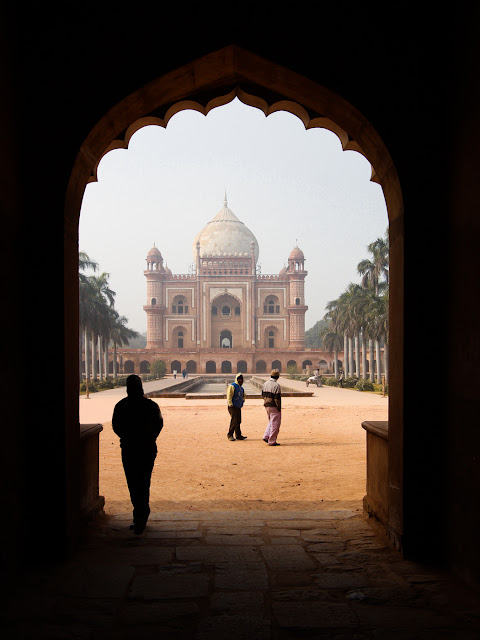 And so it does. 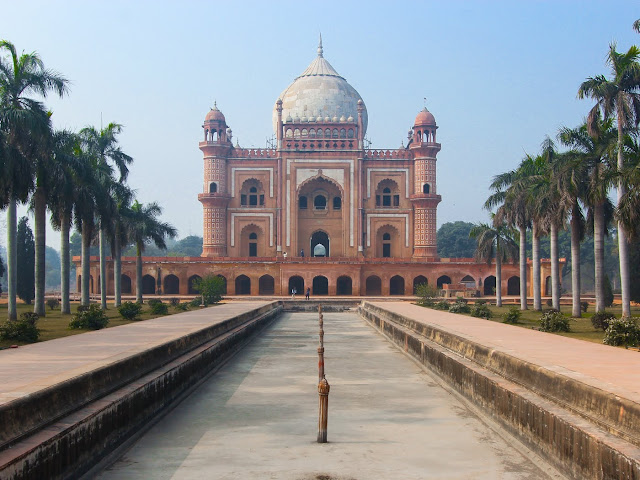 The tomb is slammed for too much ornamentation, as if the French snuck over and made a big frothy cake. But inside, while the dome carving is endless, it's also beautiful. Art Nouveau, here we come.

One design touch they got completely right was the placement of the entrance doors. They're symmetrical, not unusual for tomb design, one to a side, centered. But there aren't screens or other impediments to walk around before entering the mausoleum center, meaning light passes directly through. Uhm, divine light! 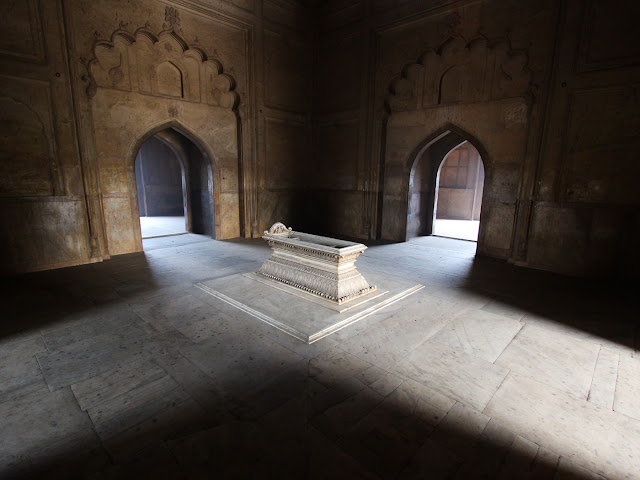 A couple more details. An end minaret, full of inlaid marble. A tourist with inlaid teeth.

Any visit to the Jama Masjid has to include a short detour to the famous restaurant, Karim's. The place is a warren of separate dining rooms located off the main street south of the mosque. Kebab is a specialty as well as Mughlai cuisine. Go for the food and the action. 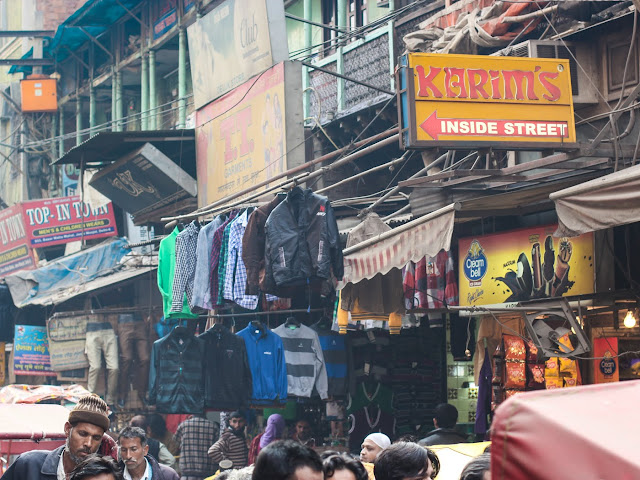 The confusing entrance. Karim's has taken over the lower floors of every building in the alley courtyard, you just need to pick which dining room line to stand in and hope it moves fast. 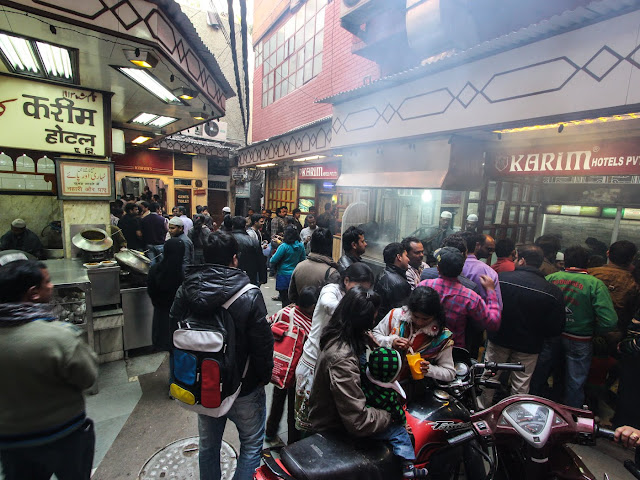 Grilling mince-meat kebabs and loading up on bread.
Pots full of stewed meat, ready to be heaped into bowls. A scrawny, but tasty tandoor chicken.

We shared a table with these fine gentlemen, the two on the left from Kabul visiting their friend. 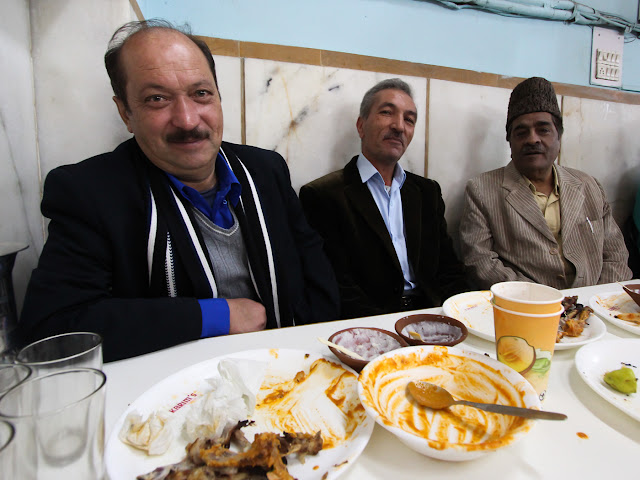 The mosque, Jama Masjid, in Old Delhi is the center of a lively Muslim quarter. If you plan on wandering over to pray a few times a day, get set to run several gauntlets of shops, restaurants, table vendors and tea stands. It's basic supply and demand and both are overflowing.

One of the busy streets near the mosque. 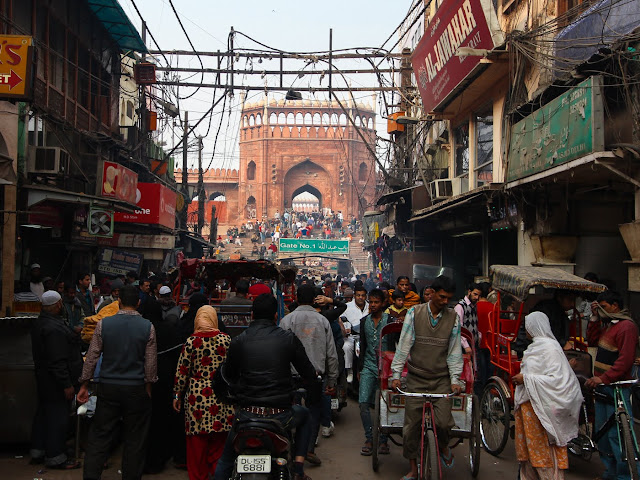 A gentleman lighting his cigarette with a rope. A rope? Men hanging at the tea shop. 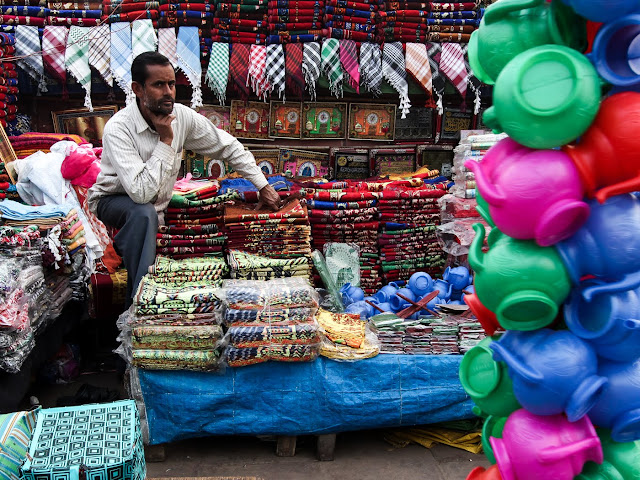 The chicken corner guys, busy on the grill. This photo has not been color enhanced. The butcher, working his sharp magic on goats.
More time at the tea stall. 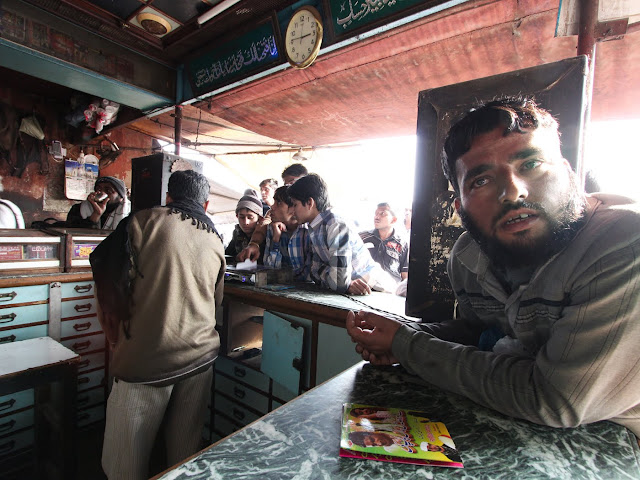 More views of the action.

This grand mosque makes a grand statement in the old part of Delhi. It's the biggest mosque in India, capable of holding 20,000-25,000 worshippers for a packed service. Completed around 1656 by Shah Jahan, the Jama Masjid dominates the surrounding busy neighborhood and makes a nice compliment to the Red Fort that sits a few blocks east.

The busy courtyard just inside the east gate. 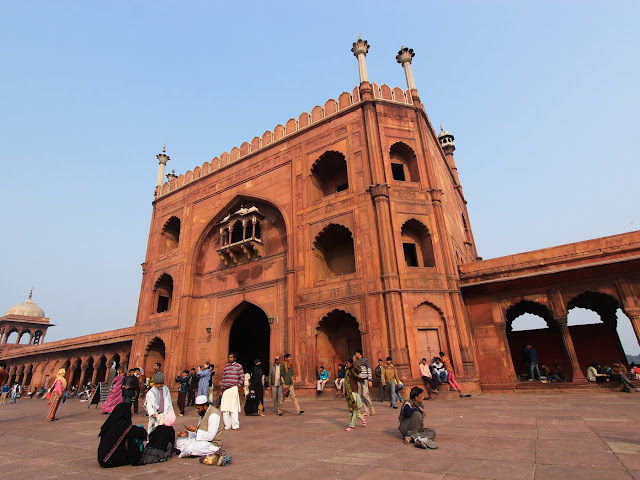 The steps outside are busy with people hanging out, waiting on family and friends, similar to New York's Metropolitan Museum of Art. Heading through a gate, the mosque in the distance.

More outside action, selling sweets or posing for a portrait.

Inside the majestic mosque, always time for a prayer. 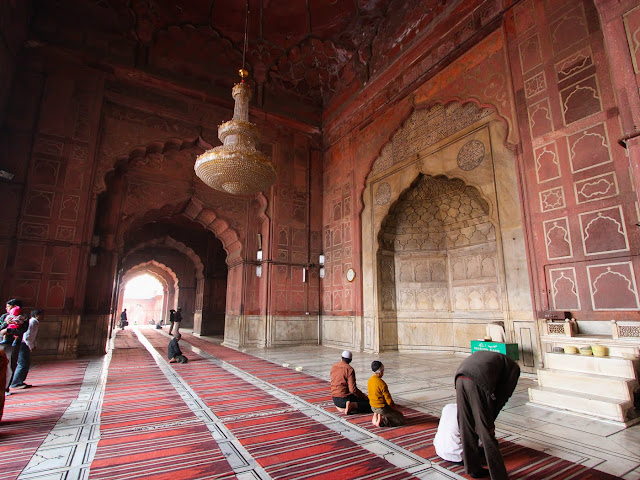 We popped into one of New Delhi's main gardens right before the sun disappeared (who could tell from the mist and pollution?) and enjoyed a stroll around the Mughal ruins. It's a nice respite from busy Old Delhi and the Mughal tombs lend a bit of gravitas to the meandering meadows.

Just inside the entrance, a natural world unfolds. 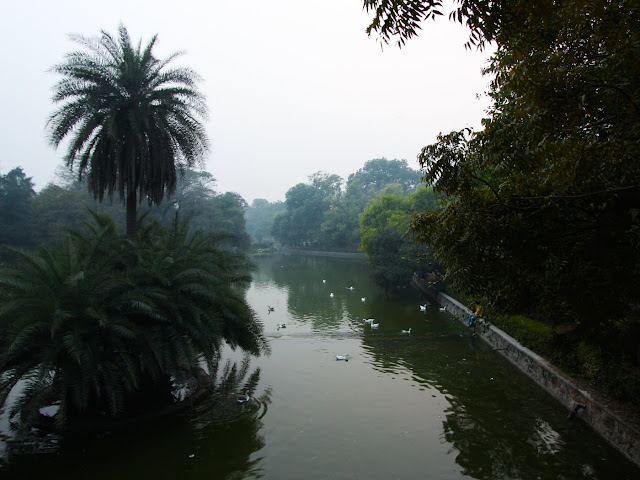 A small Mughal tomb and looking through the archway of another tomb to the Shish Gumbad.

A full look at Shish Gumbad, a beehive of activity going on in front, kids with large balloons, families getting ready for prayer before settling down for a meal. 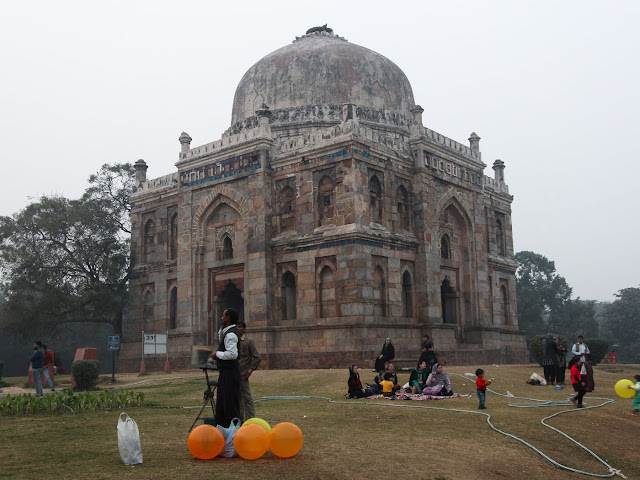