Continuing the walk around Alor Setar, new details to feature.

Back of a repair shop, an appearance by the landmark of Malaysia, the Petronas Towers. 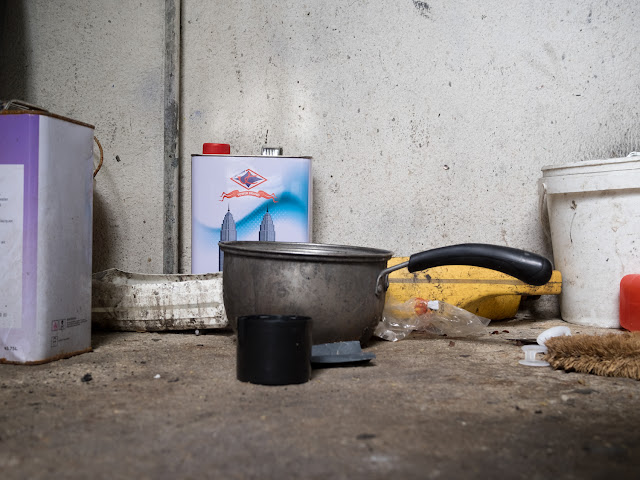 Inside an antique/junk shop, the wall of distant things past. The images on the bottom are of the iconic Malaysian film auteur, P. Ramlee. 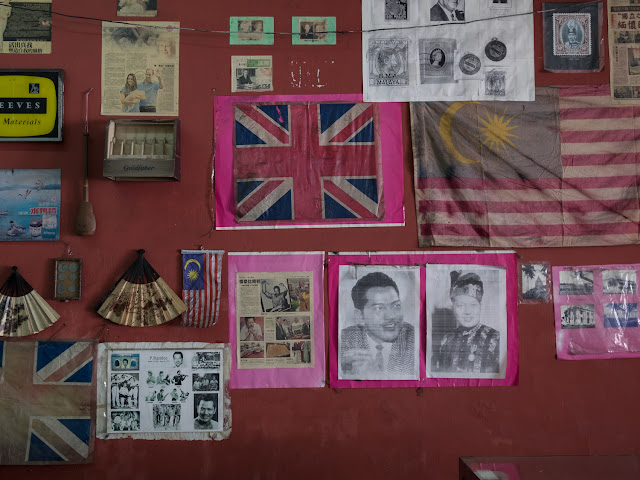 Plastic, for your protection. Bag of something, displayed in nature.

Paperwork at a clothing stall. We're watching your work. 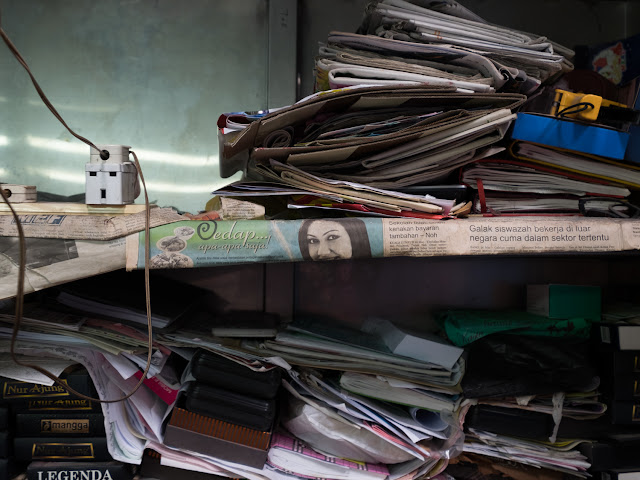 Every city, town has interesting details. Here are a few from Alor Setar.

An awning that's outlived its purpose. Except for looking cheery. 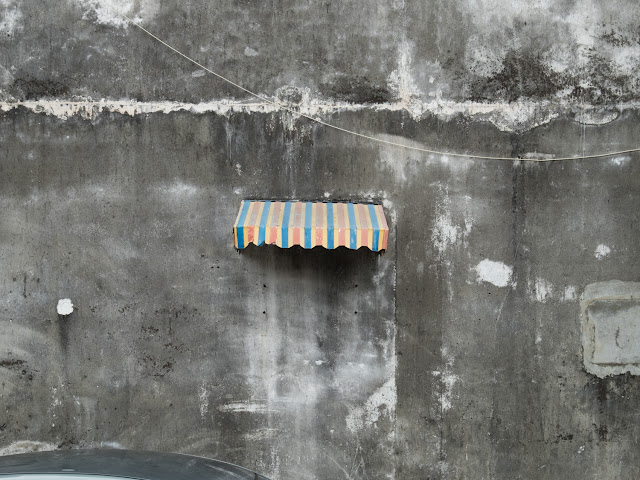 Buddhist shrine in an unlikely place, an abandoned courtyard. Getting sticker happy with your scooter. 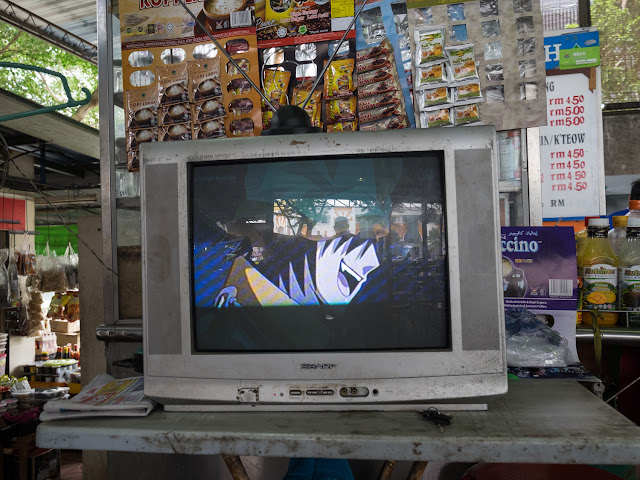 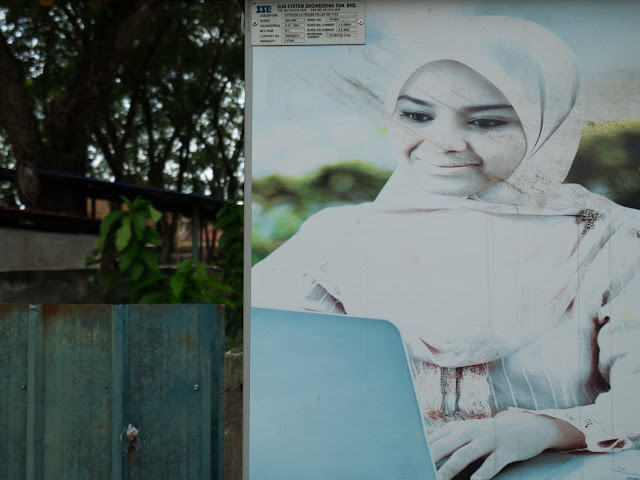 Where do you go if you're looking for snow, Santa, or a winter wonderland in Malaysia? Not outside. In Kuala Lumpur, the best place to look for the biggest Christmas displays is...in the mall. 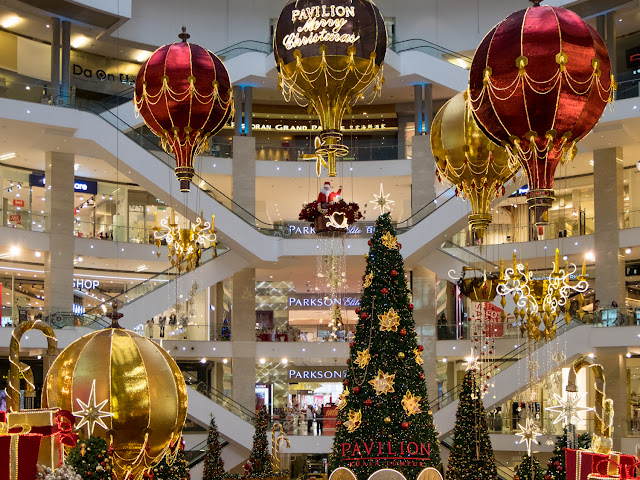 Whole winter worlds have transformed mall atriums. Make sure your mall is identified. A giant bear, collapsed behind ropes, taking a break from hours of posing with kids. It's so hard to be an inanimate object! 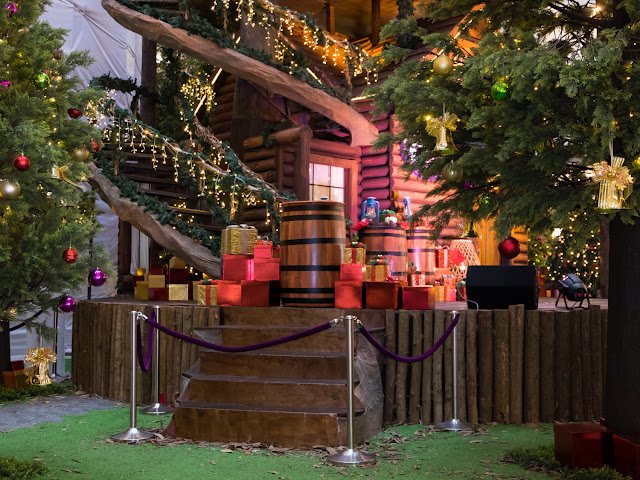 Oh boy. Telecom display with electronic billboard in the background. No control over the rolling juxtaposition. 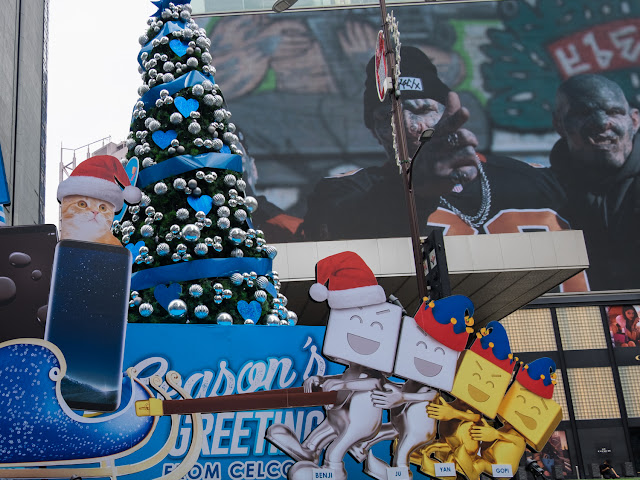 Back inside: happy selfie time!! Don't miss the trash can. Ignorance to holiday displays. Have smartphone, will zone out.

Not all Christmas decorations are reserved for malls. In our lobby, a little tree. Don't forget to recycle! 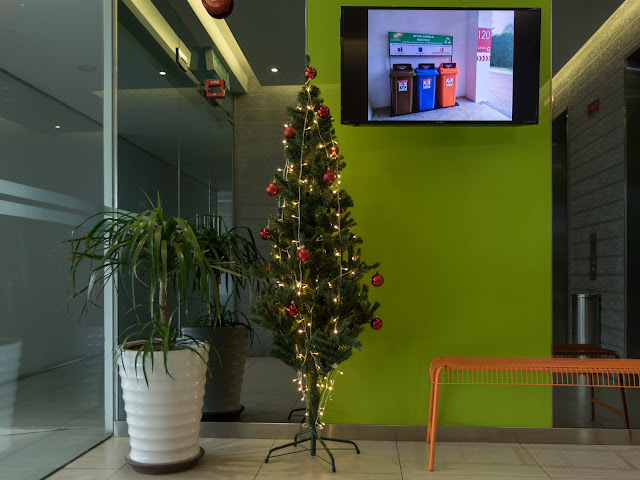 Tucked into a corner of Chinatown in Alor Setar is a riverside Buddhist temple, a religious refuge among the busy rows of shops nearby.

The gate gives good info: name, when built, renovated.  They're on about the 100-year plan for fixing things up. 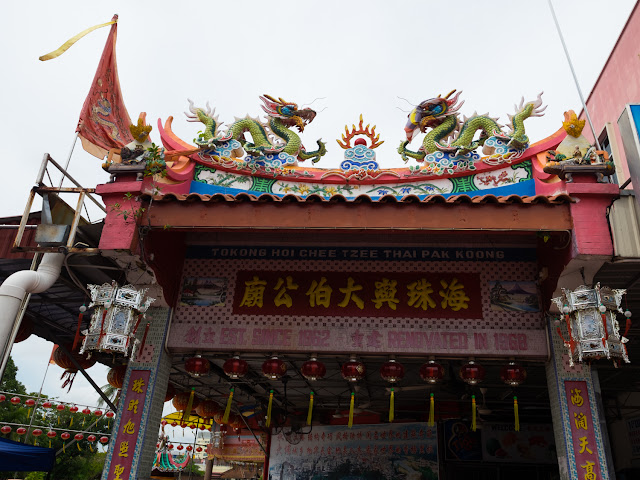 A closer look at the altar. 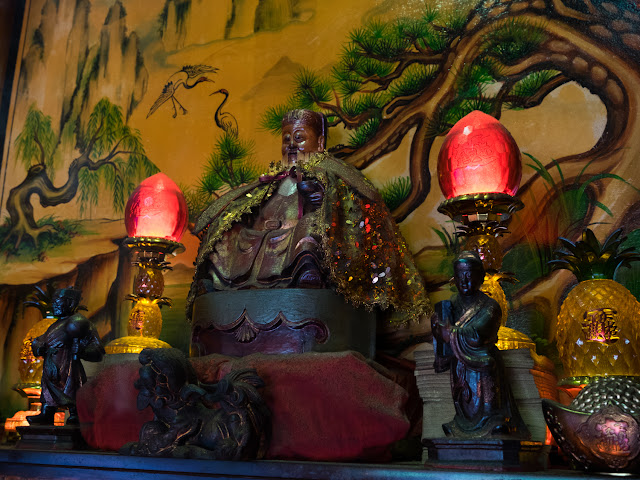 Illusions. A paper pineapple and a photo mural depicting the old country. 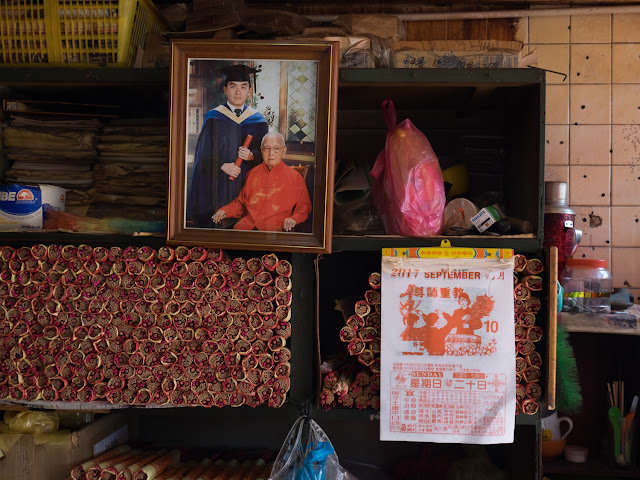 Right off the main drag of Alor Star are pockets of old, wooden houses - symbols of a long ago rural era. Or not so long ago, judging by how many house are still around, some abandoned, most still in use, albeit heavily augmented. A rolling urban renewal. 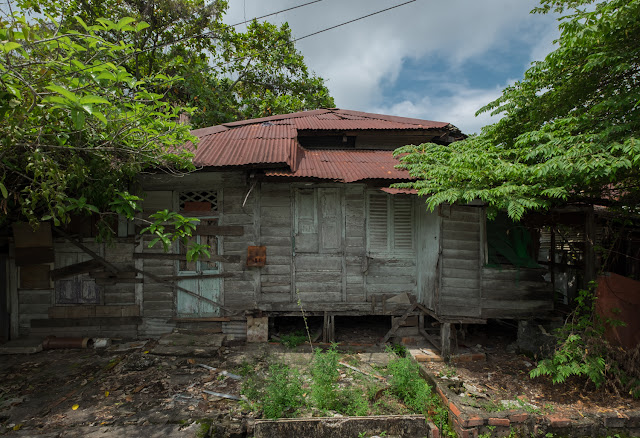 Courtyard, paying homage to the Sultan's wife. A living room.

Man of the house. 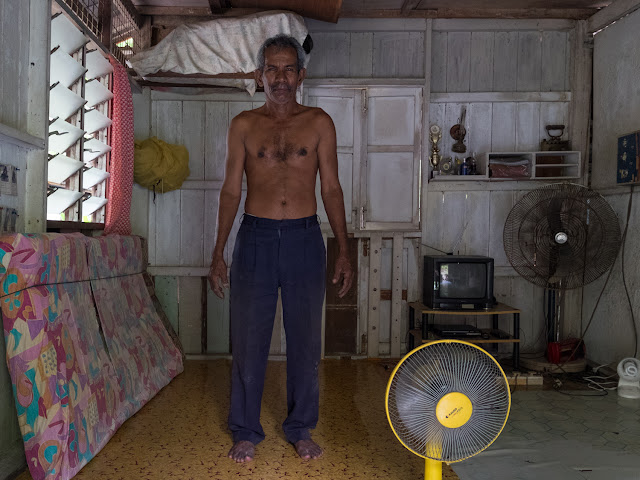 Bookcase. Food? An endless supply of eggs out back.

On the wall, a primer on how to pray properly. 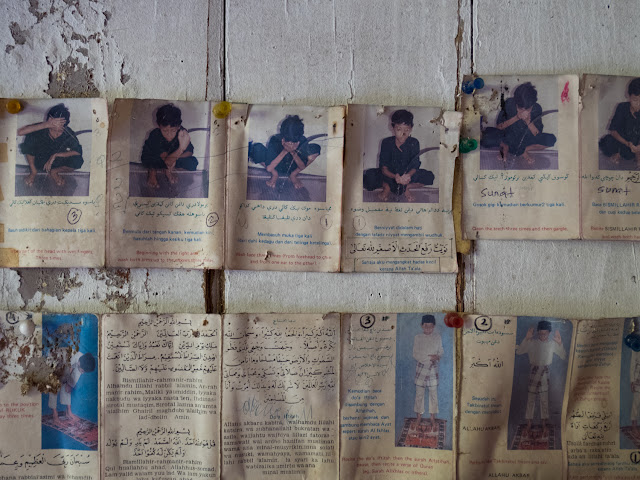 It's impossible to overstate the availability of food in Malaysia. Beyond restaurants and convenience stores, there are endless street stalls. Hunger is not an option. Ever.

Fried food in a hawker stall case, a Malaysian staple. 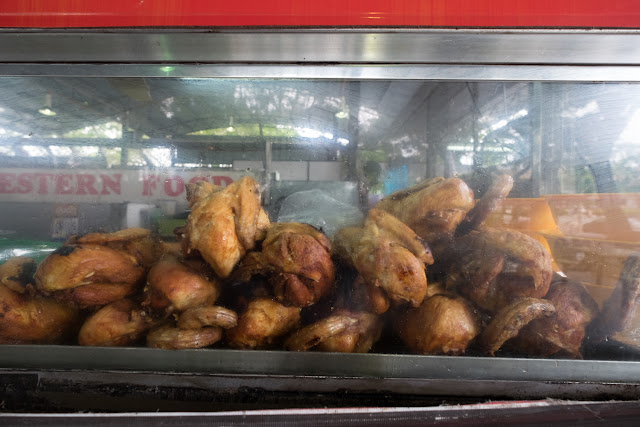 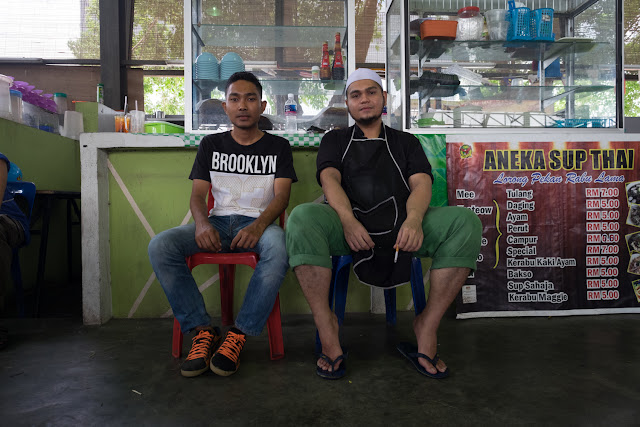 Some OCD evidence at the food stalls, how to close up your stall and how to sort your dishes.

Besides a place to eat, the food stalls are also a perfect place to hang out. 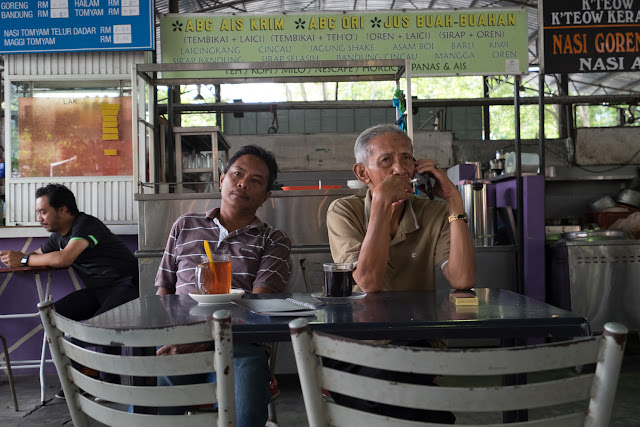 The look of cooking experience. 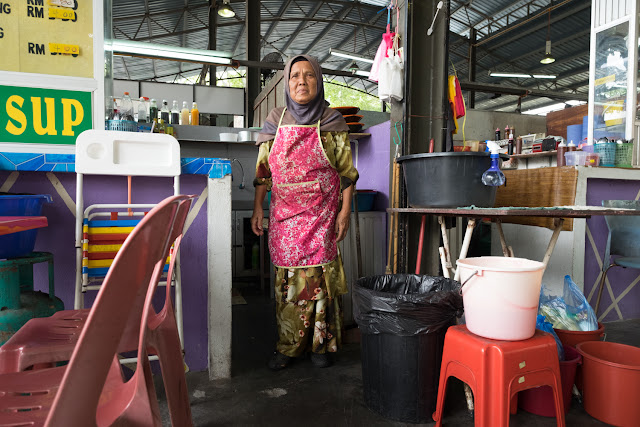 The Architecture Of Alor Setar

Alor Setar is the capital of the northern Malaysian state of Kedah. It's a quaint, historic city with some nice patina. There are a handful of colonial era structures to give the place style.

Not colonial. The towering symbol of Alor Setar, a communications monolith, erected in AD 1997. You've got your observation deck, restaurant, nice views of the town and rice paddy fields beyond. 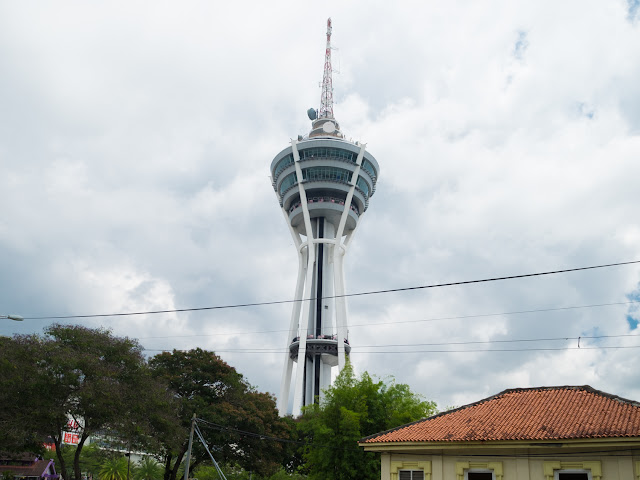 Some government buildings that the Russians could have built, minus the bright finishing of the building on the right.

Malaysia is a mix of ethnicities. Decoration on a Hindu temple built in the Dravidian style commonly found in South India. 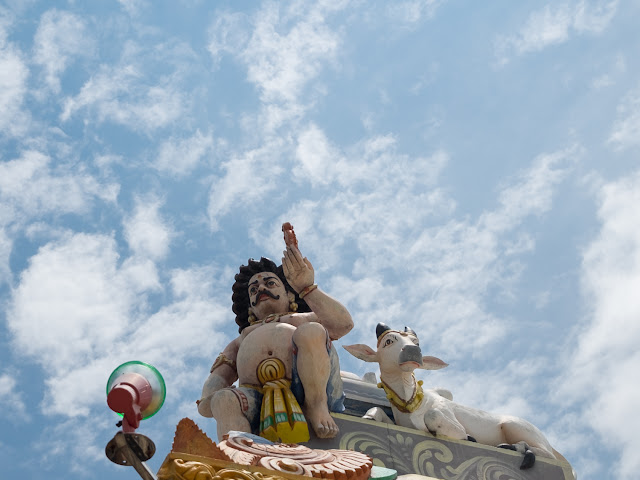 Rumah Merdeka, "Independence House." Malaysia's first Prime Minister, Tunku Abdul Rahman, would use this house as a base when he was back in his home state of Kedah. Beautiful tile work. 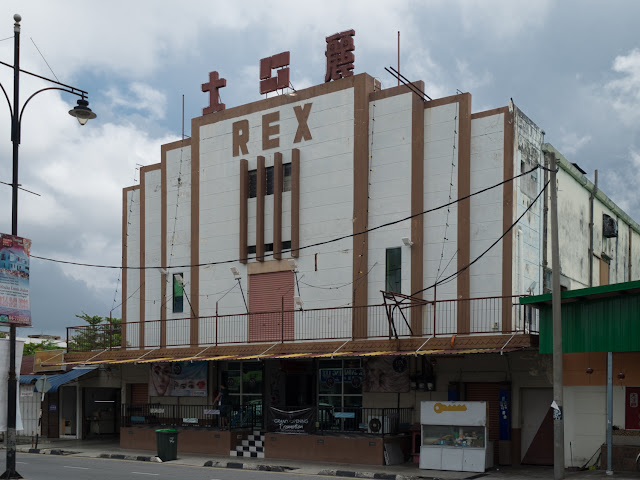 They like their towers in Alor Setar. The Big Clock Tower (is there a Small one?) and Balai Nobat, which stores musical instruments.

An interesting use of concrete block, finished off with the patina left from tropical rains. 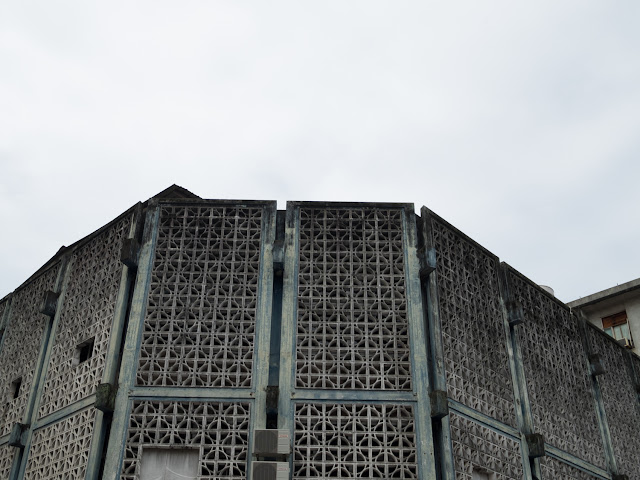 A last tower look, the lighthouse in Chinatown. 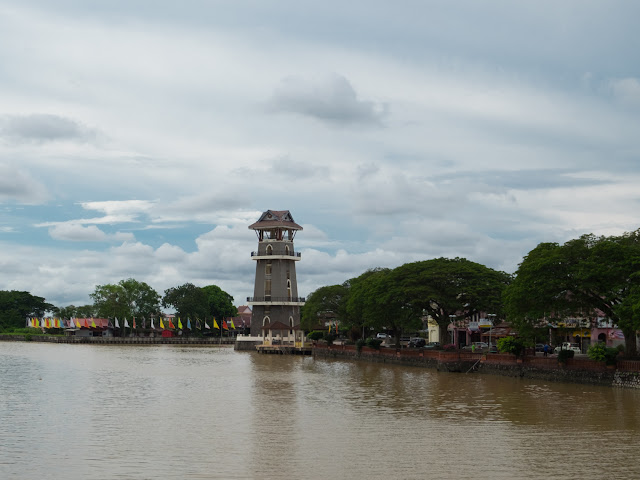