*With apologies to Andrew Meyer, the University of Florida student who coined the phrase "Don't Tase Me, Bro" during a political event at the college in 2007. 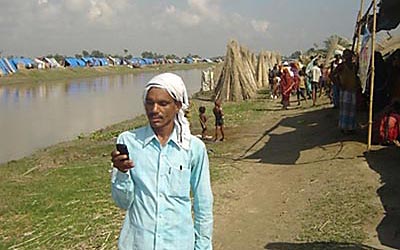 In a country with more than a billion people, it's sometimes hard to communicate amid the cacophony of noises. People routinely do it via text message or SMS. Texting is ubiquitous in India since many people don't have landlines or computers, and thus rely heavily on their cell phones for communication.

But last week, the Government of India cracked down even on that communication, limiting the SMS traffic to five messages a day until Sept. 2.

The ban stems from widespread false text rumors warning of attacks between Muslims and the northeastern indigenous Bodo tribe in the state of Assam. The texts have spurred violence and contributed to a mass exodus of people from across India back to their homes to help defend their land and families.

The government took quick action to stop the violence and traveling stampede. But the blunt decree of a five text limit to a billion plus people for a couple of weeks is a new paradigm for us. The freedoms of the United States just became dearer.

Here's a New York Times article about the rocky relationship between the Indian government, which is looking to control information, and the global tech companies that enable even greater dissemination of information.