In addition to the mighty Taj Mahal, there's another famous tomb in Agra, named Itimad-ud Daulah. But who wants to call it that when the place earned a nice nickname due to its architectural similarity? Hello Baby Taj. And to be fair to the half pint, Baby came before the Taj Mahal so the similarity and influence is actually on the big boy that came later.

So who's buried in Mizra Ghiyas Beg's tomb? He's been there awhile, the place was built in the 1620's. 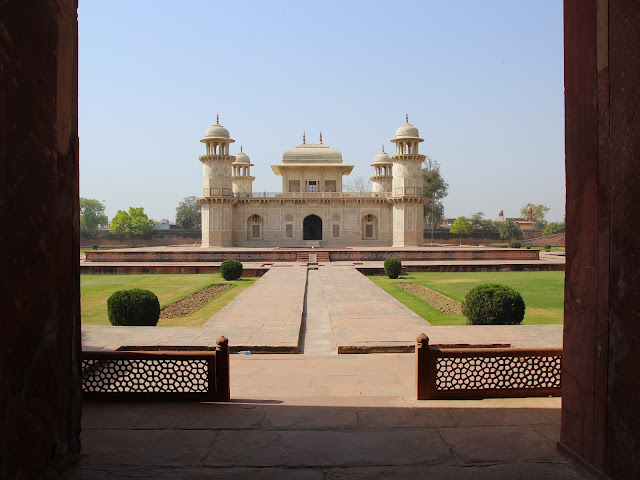 A minaret dripping in inlaid marble - one of the stylistic breaks from previous Mughal architecture, which was mainly sandstone with marble highlights. This new style was a major influence on the architecture of the Taj Mahal. The fine inlaid work made a great background (and the foreground ain't bad either).

Another view of Baby and inside the tomb.
In addition to elaborate marble work, they also left room for some fine painting. The view out back on the Yamuna River. Not much to appreciate, from the dried up river that swells during monsoon to the typical urban eyesores of modern India. Still romantic.