Vietnam is hurtling into the 21st century and buildings are being torn down, redone, turned upside down for the sake of chasing the almighty Dong. Similar to Malaysia, the traditional low-rise architecture is shophouse in style. And it's becoming endangered.

Luckily, you can visit a beautiful old home that's now a museum. The Ngoi Nha Di San house is a fine example, built in the mid 1800s. 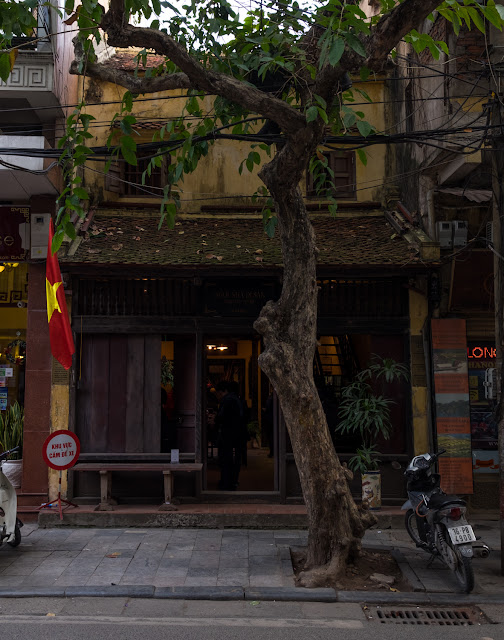 Dining room. Upstairs, open air veranda. It's all about the ventilation.

The inner courtyard, the classic element of shophouse architecture. 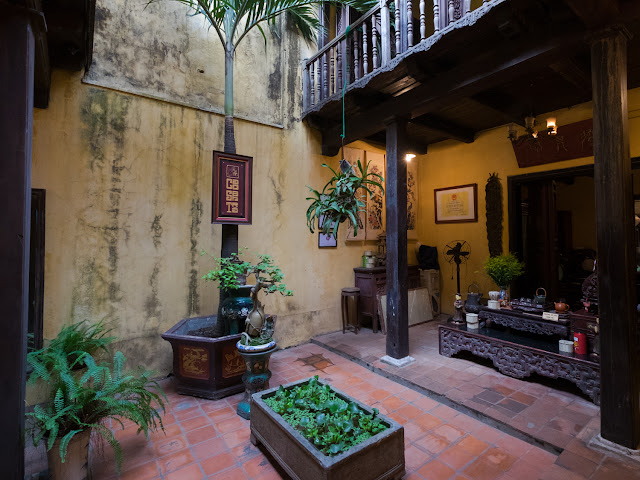 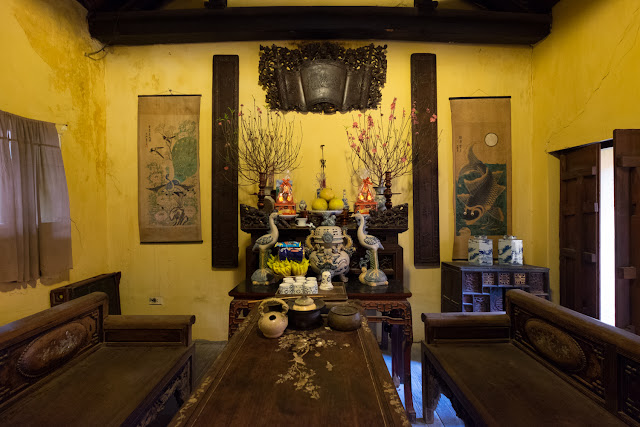 The D67 House And Bunker At Hanoi's Citadel

An exception to the ancient buildings in the Citadel complex in Hanoi is the D67 House. It was built in 1967 as the headquarters for the North Vietnamese military command of the Vietnam People's Army.

The unassuming building, looking a bit like a mid-century modern country home. Valet parking for your jeep. 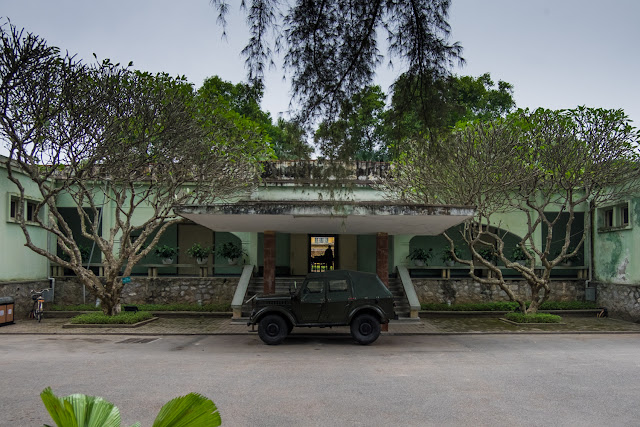 Inside, a series of mint green walled rooms for meeting and planning. 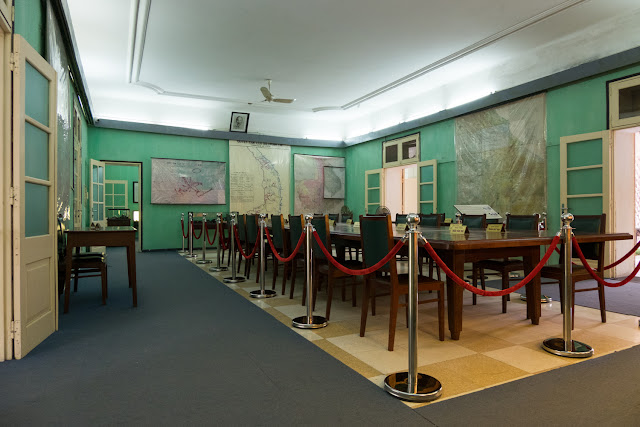 If things get rough, there's the option to head underground, beyond the reach of any bombing. The stairs down and a room crammed with communications gear. 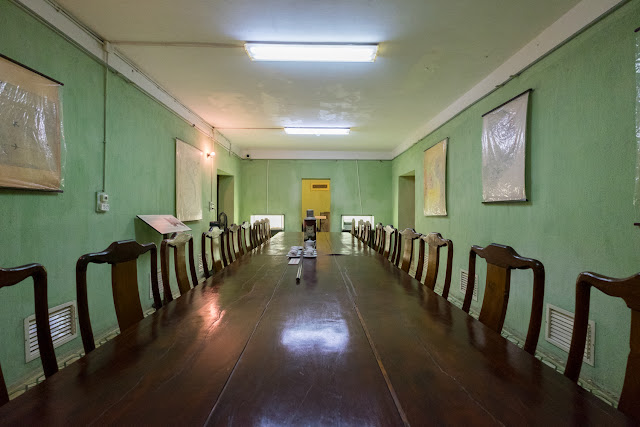 Visiting The Imperial Citadel of Thăng Long In Hanoi

In the center of Hanoi is a royal enclosure built during the Ly dynasty, around 1010. The area was the seat of the Vietnamese court until 1810 and then either left to ruin or torn down by the French 40 years later. A few structures remain.

The most impressive building on the site, the Doan Mon gate. It marks the Southern entrance to the palace area. 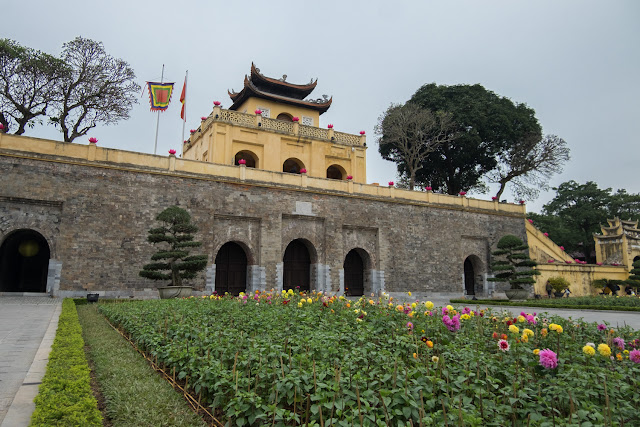 The flag tower, built in 1812. At the north end of the complex, a lovely yellow pagoda.

Work to be done. There are several big government buildings yet to be restored and repurposed. 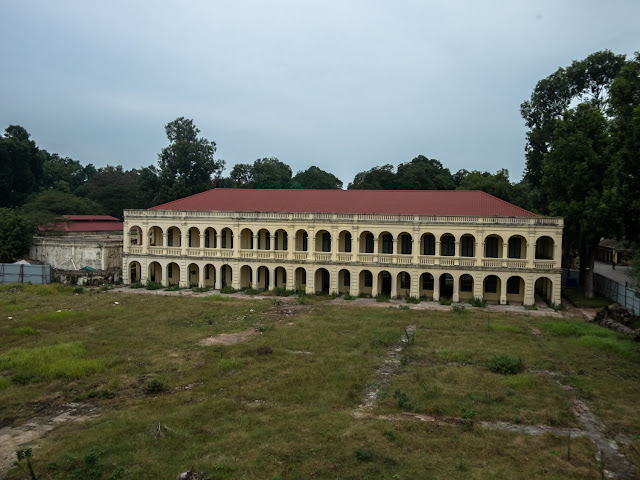 More details of the buildings, colonial and art deco influences.

Gardens and old dynasty architecture, a nice combination for a respite in the middle of Hanoi. 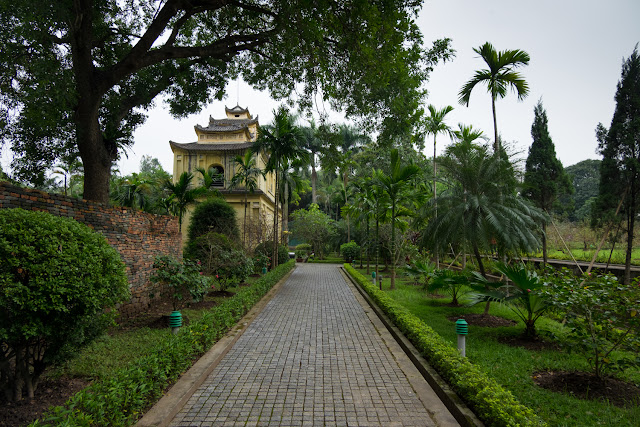 The Plastic Prisoners At The Hanoi Hilton

The Hanoi Hilton was the nickname given by the American prisoners held at the Hỏa Lò Prison during the Vietnam War. There's a whole other history for the Vietnamese, the period of French colonialism, when the prison held their fellow countrymen.

To illustrate the Vietnamese prison experience, the museum has an impressive collection of inmate mannequins in all sorts of desperate poses. A little dramatic lighting and careful framing produces emotional results. 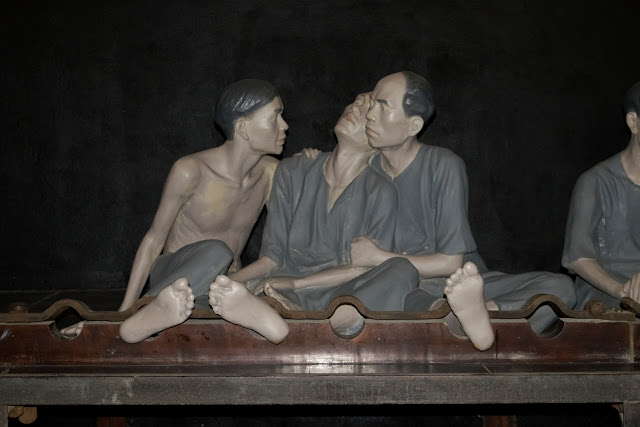 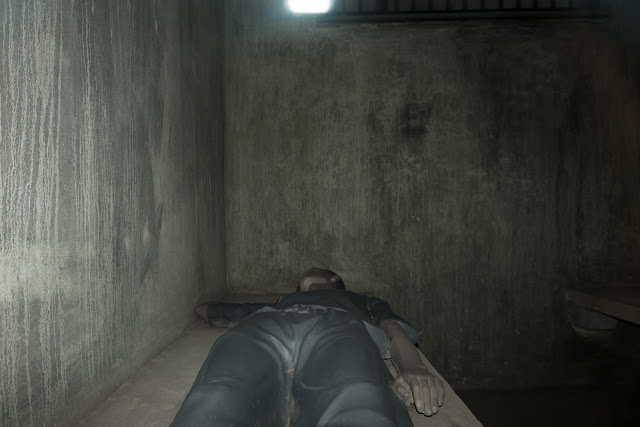 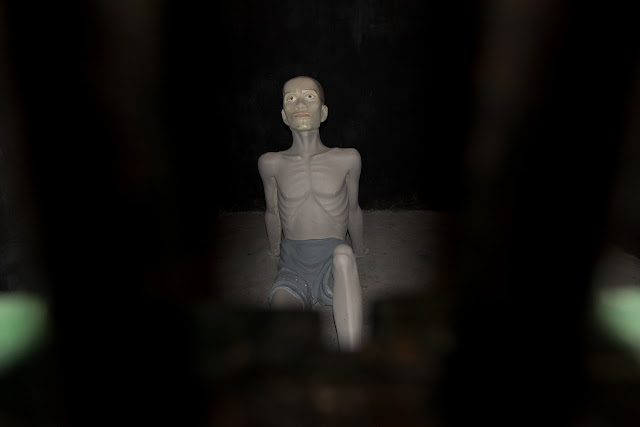 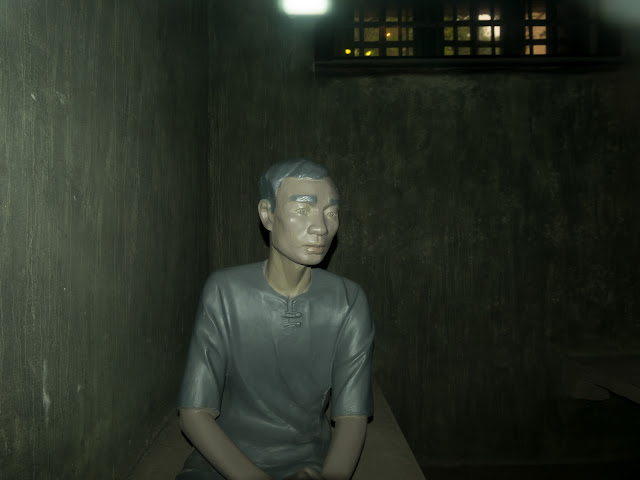 The Hanoi Hilton, officially known as Hỏa Lò Prison, is now a museum, at least through the buildings of the complex that still exist. Most of the prison was torn down in the 1990s to make way for a big apartment complex. Such is progress.

The infamous entrance. The prison name is left over from the French. 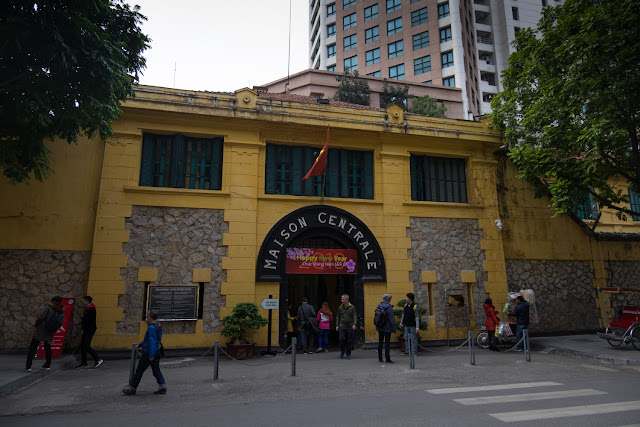 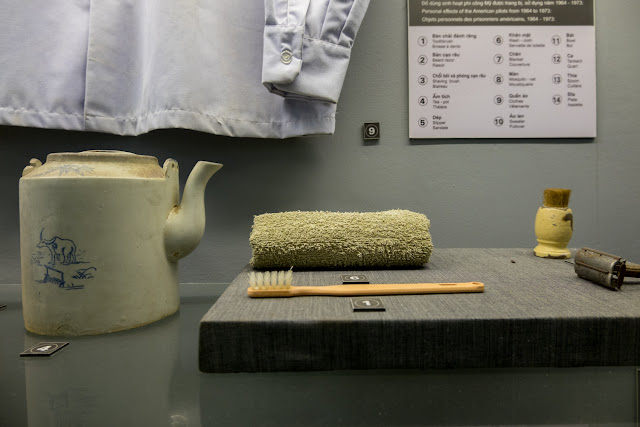 Despite that only a small percentage of the complex is still intact, there's plenty of prison experience to be had. A cell corridor and a diorama of Vietnamese prisoners held during the French colonial era.

A memorial is out back. 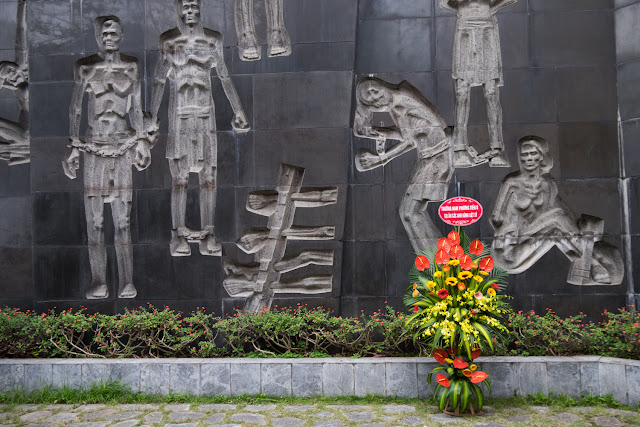 Grabbing some items for dinner, maybe something for your wardrobe can still entail a mad dash through the more traditional shopping areas of old Hanoi. The emphasis is an overflow of product and a crush of people ready to buy. Time to dive in.

Heading into a shopping area. 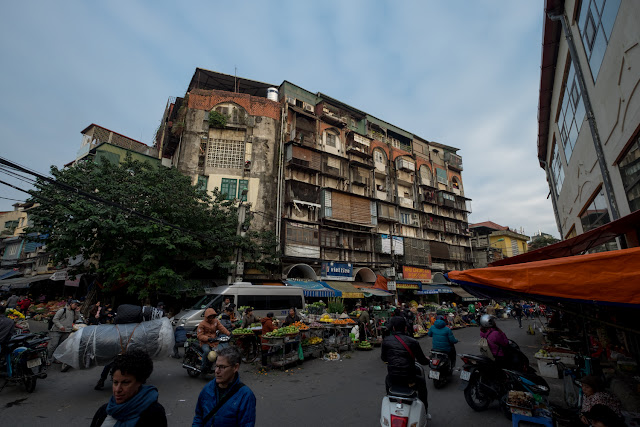 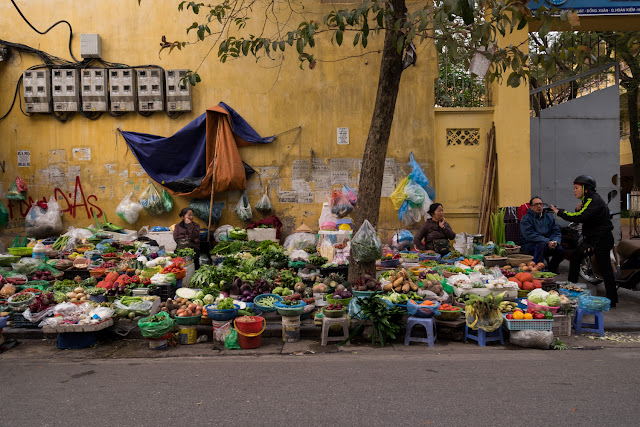 Best of luck finding the underwear you're seeking.

Back at Dong Xuan, the race is on. 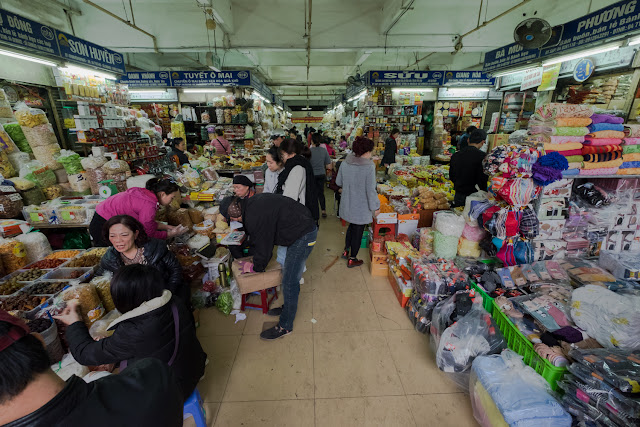 Ha Long Bay, at least the beautiful view on an outside advertisement. 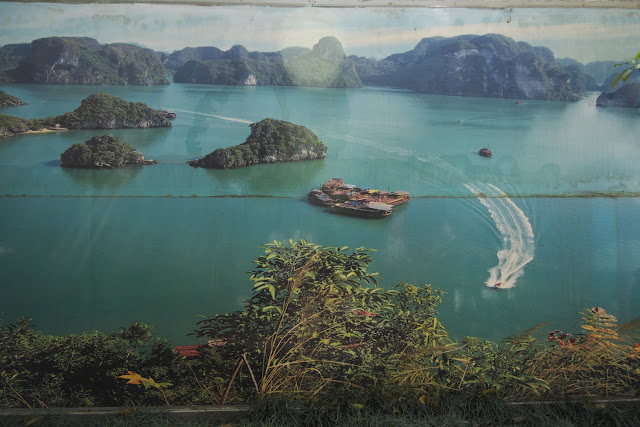 Flag flying in the Old Quarter. A little formal fantasy in the night.

Art at the Women's Museum. 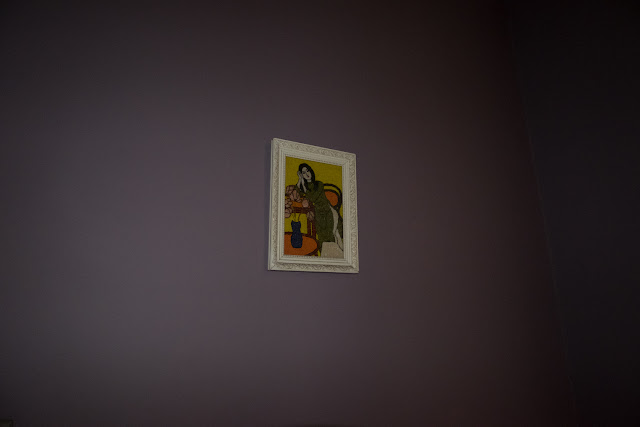 Lenin statue in the heart of the city. 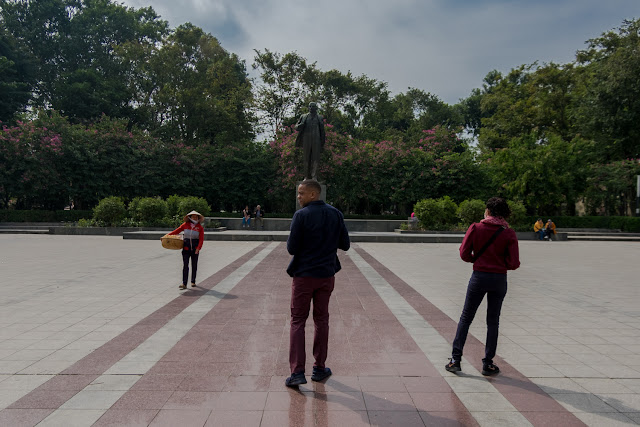