Lithuania has a tragic history of occupation at the hands of Russia. Finally, in 1990, Lithuanians gained their independence and quickly worked hard to re-establish their national identity. What to do with all the old Soviet sculptures and propaganda? Many people wanted to tear down and destroy everything, the fewer physical reminders of the Soviet era, the better.

Local businessman Viliumas Malinauskas had other ideas. He convinced the Lithuanian Government to let him build a park where sculptures he collected could be seen by the public. Gruto Parkas opened in 2001, but not without controversy over the suitability of displaying objects related to past abuses. For visitors to Lithuania and younger generations, the park is a valuable way to see first-hand objects related to a time that is now quickly fading into history.

At the entrance, an example of a Soviet train that took many Lithuanians into exile in Siberia. 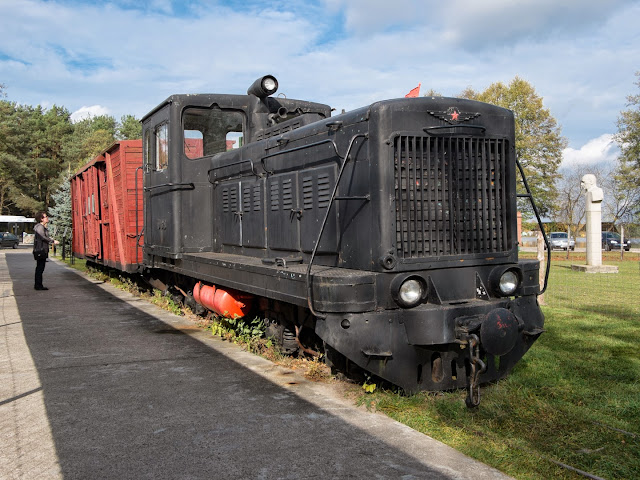 A bucolic scene (complete with yaks) that belies the sculpture's past history. A soldier, rightfully hiding. 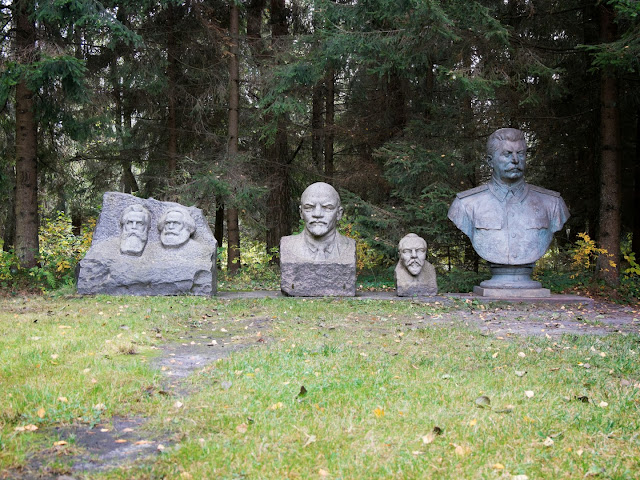 Not all sculptures are of old farts. Some guys get the rock star, wavy hair treatment. Mind the cold sores. Propaganda at its finest, a joyful mosaic of the party's youth. 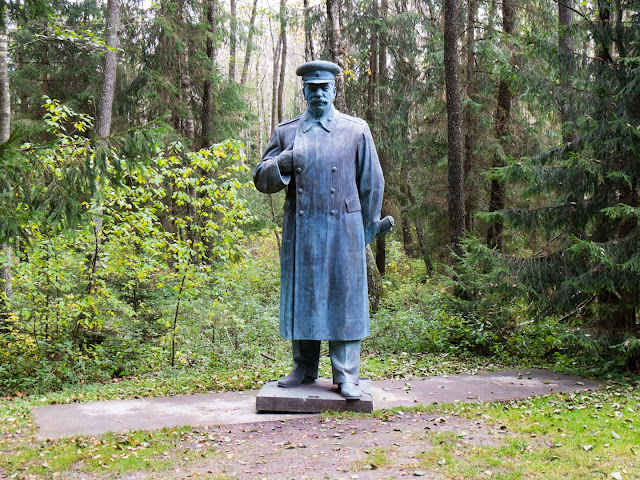 The Building Tunnels Of Vilnius

The Old Town section of Vilnius is filled with block-long buildings, some Baroque in style, others quite plain, appearing to be the 15th century version of warehouses. One thing most buildings have in common is a way to get around the back of the place. Forget alleys or free-standing structures with room for circumventing. You want access to the back, you must have an archway or tunnel that goes through the middle of your building.

Looking through a typical tunnel. Here's a rare shot of a tunnel leading to an orderly parking area, whereas most apartment buildings feature over-crowded, motley car parks. 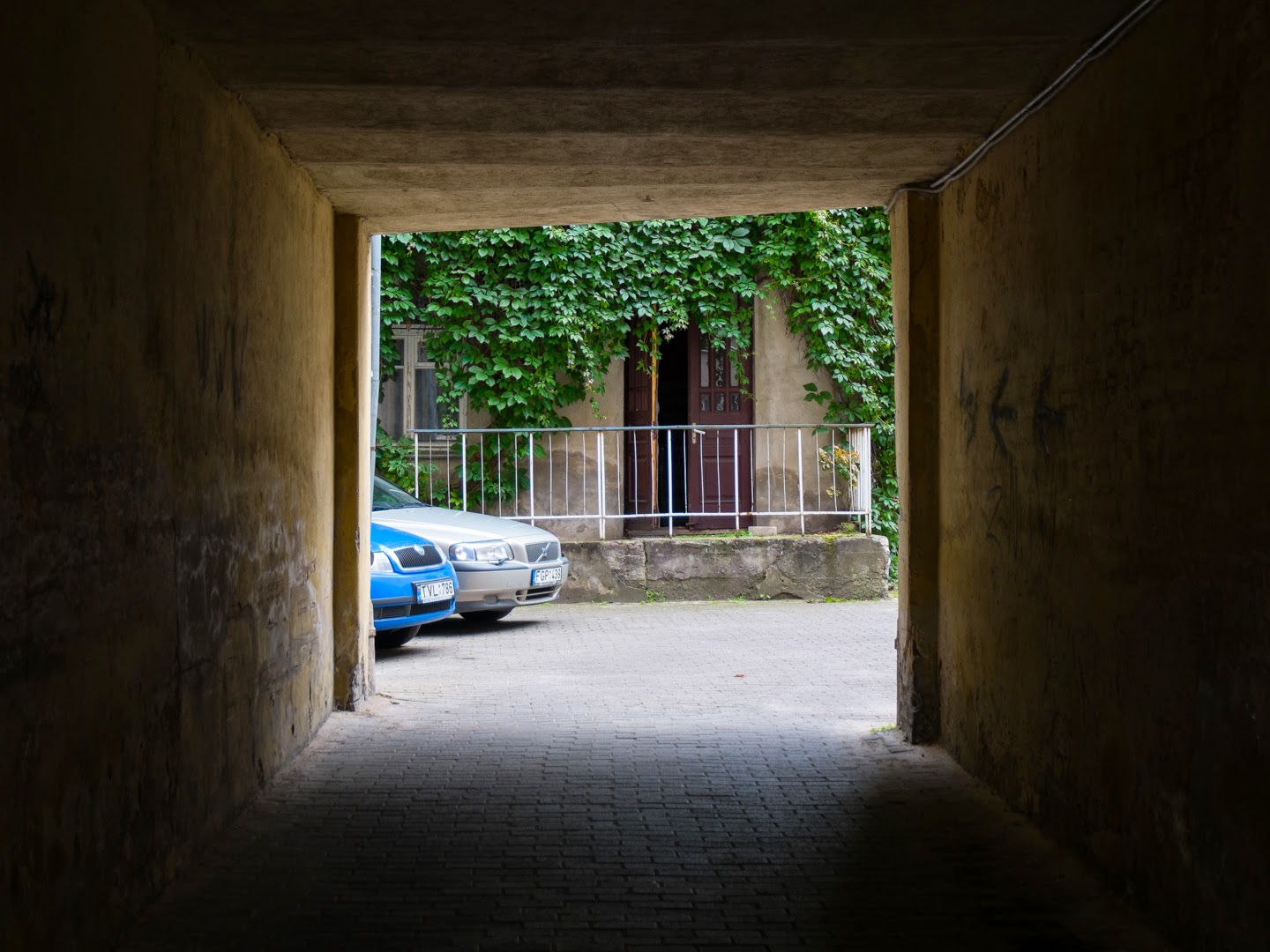 Sometimes your vehicle isn't going to fit through an arch. Sometimes it's clear the arch is for humans only.

Or maybe it's been multi-purposed. 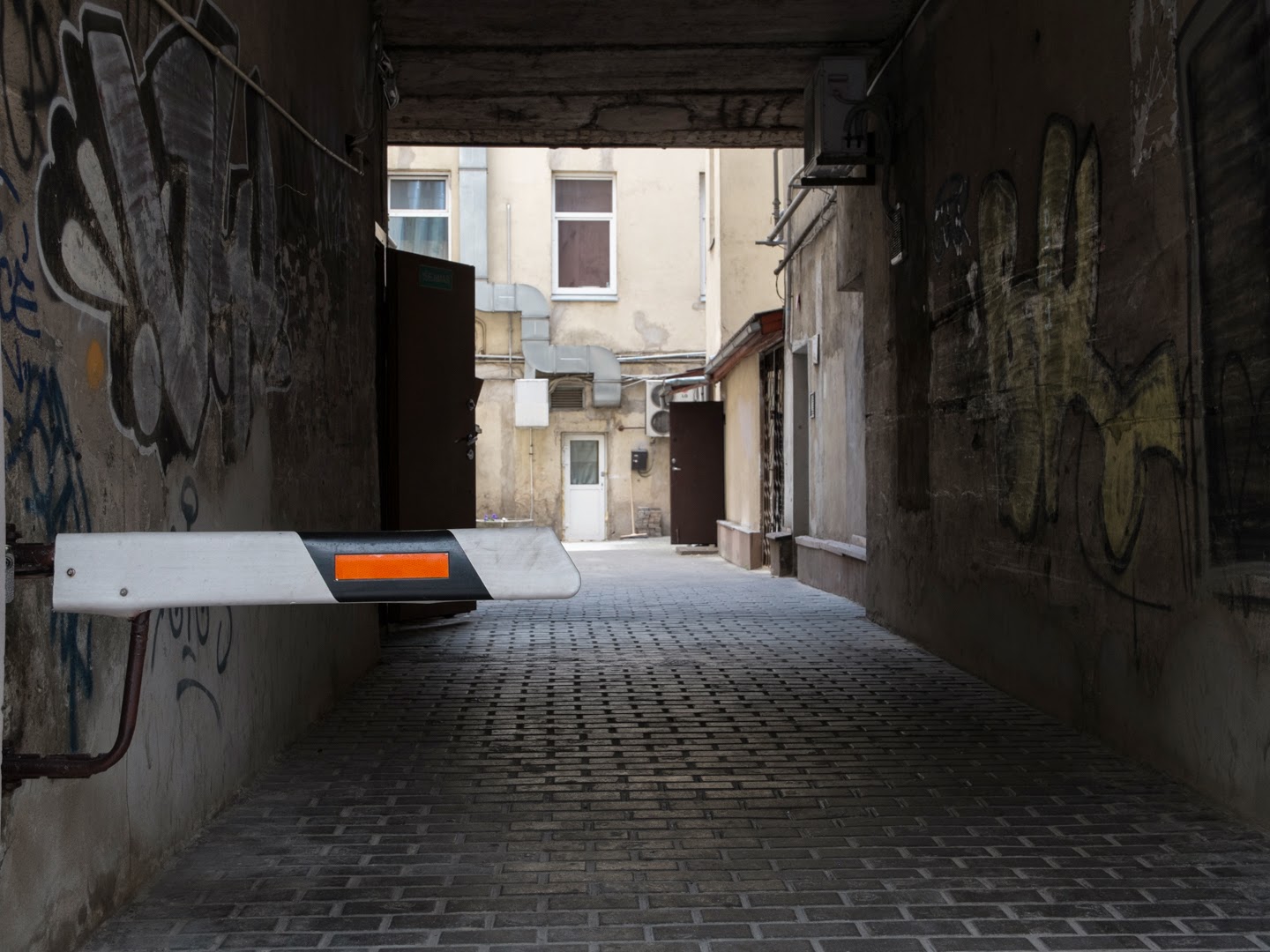 All roads lead to trash. From a flat angle, the scene beyond the arch becomes an abstract painting. 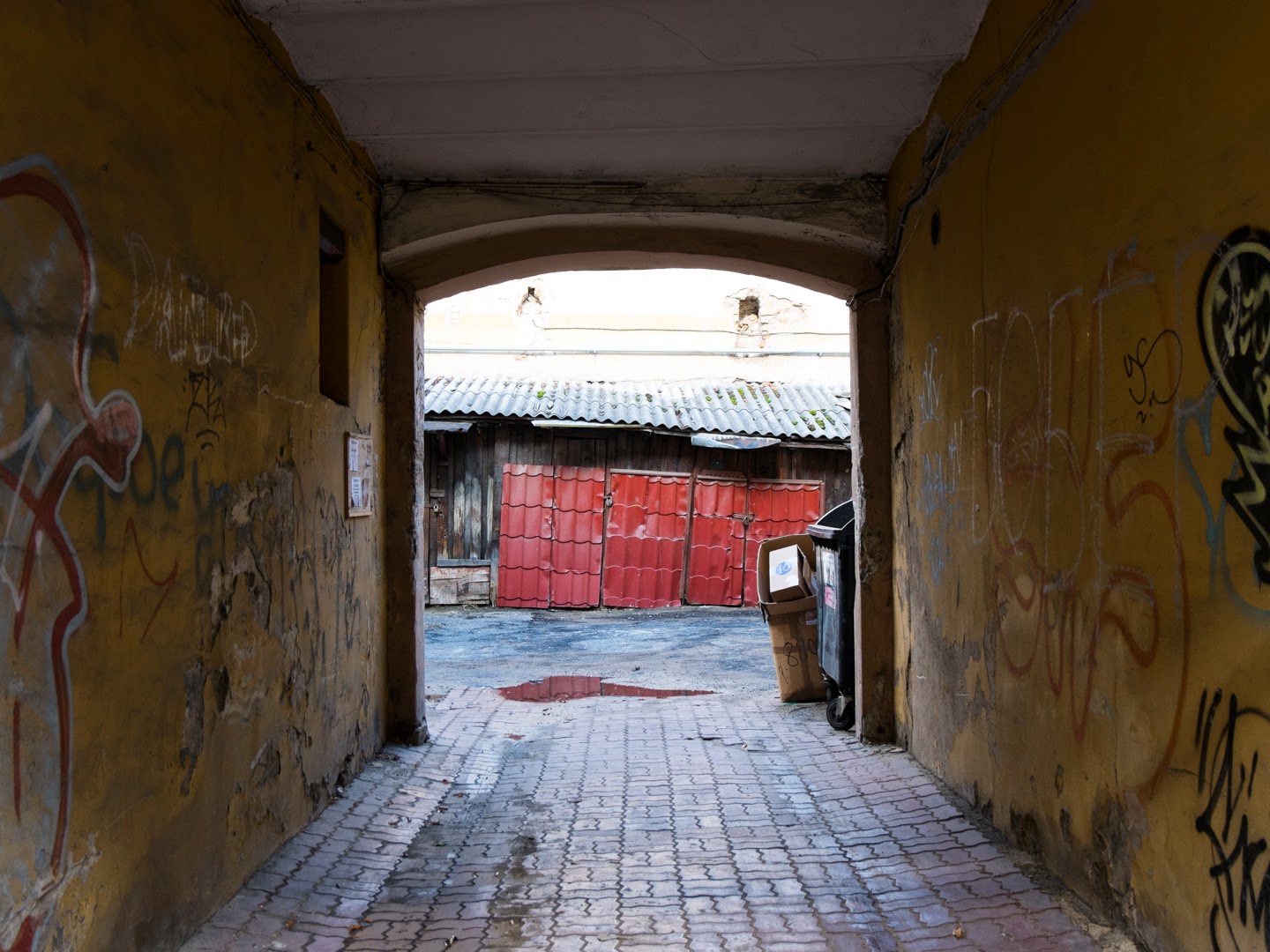 It's hard enough getting through an arch, adding an angle ups the ante. New construction keeps the old arch.

The hill of no horizon.

Graffiti In Vilnius, The Scrawled Edition

We've shown you the nice stenciled graffiti scattered around Vilnius. What about if you don't have time to do any nifty paper cutting? Or have cans of spray paint? Just find a wall and get writing.

Some old-school 80's style lettering. Maybe a message to your posse?

The world headquarters, no doubt. Aciu means "thank you" in Lithuanian. We doubt the person who needs to clean this utility box will be taking this graffiti to heart.

This one is a mash-up of English and Russian, but the translation is not fit for a family blog. 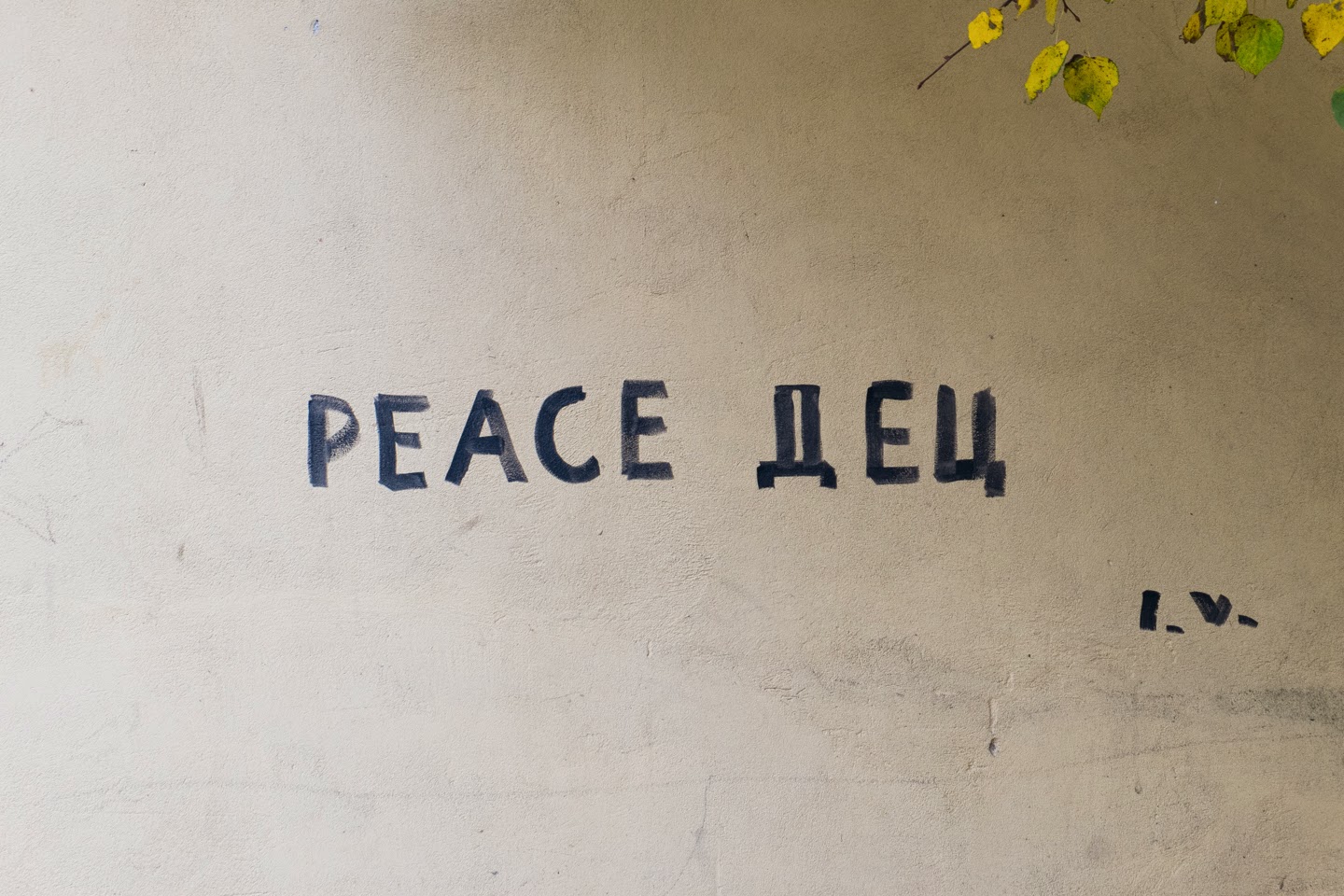 Regrets. And now Rusty is MAD.

Hurry up, already. Seems to be municipal policy on the graffiti cleanup issue.

Looking At The Crosses At The Hill Of Crosses

It looks like a hill, but it's all about the crosses. With so many to examine, the mind quickly starts to seek out the unique and unusual. It's a regular talent show, ready to be judged. We're all judged, right?

Maybe your cross plays up nationalistic or sports club pride.

Crosses on crosses, the more the better. A handful of crosses, the quickie basic model available at nearby vendors.

Getting crafty, both clay and paint. 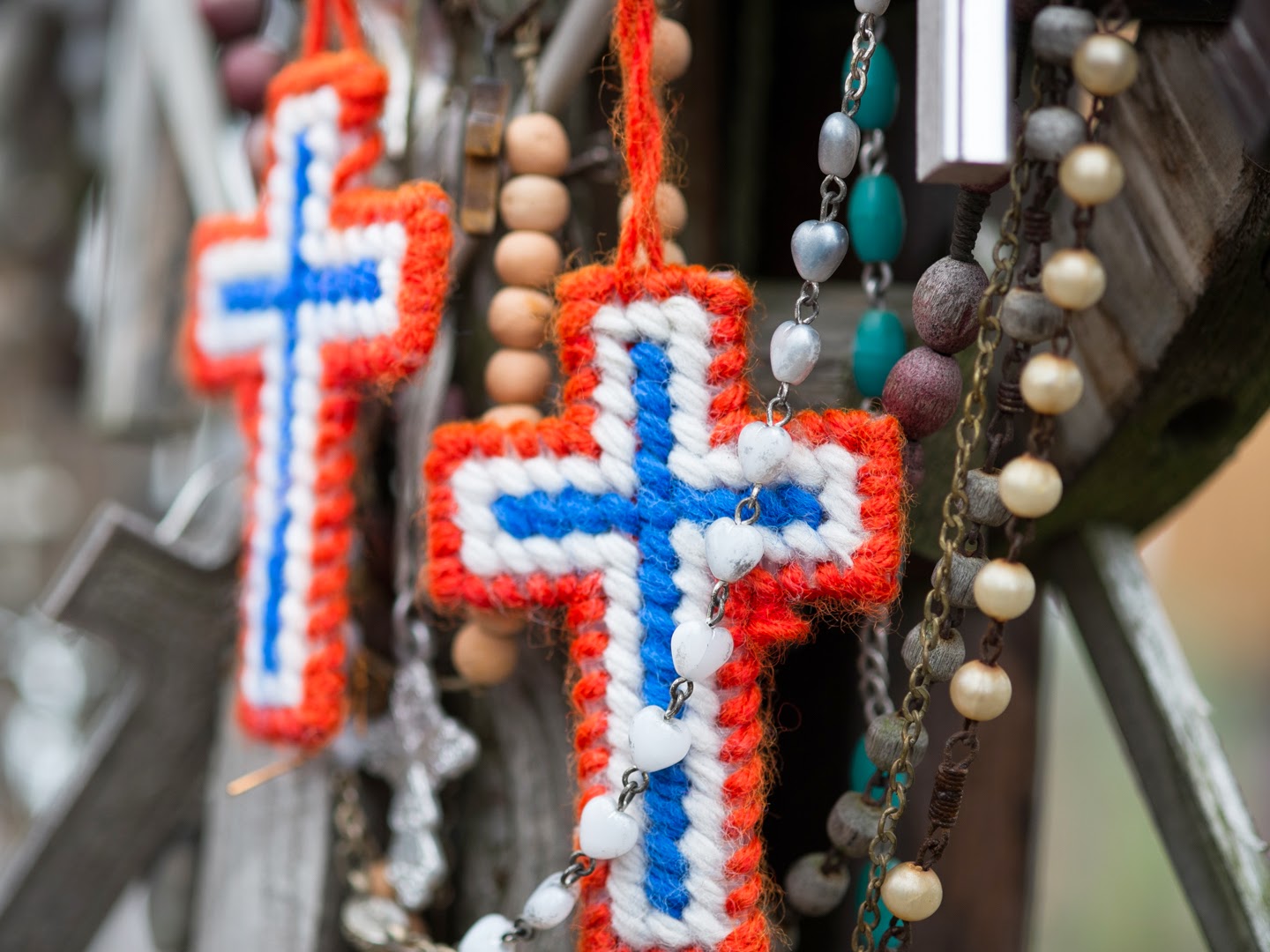 One of Lithuania's best-known tourist attractions is something called The Hill of Crosses. And that's exactly what it is, a lumpy hill in the middle of a field way up in the northern part of Lithuania. It's been around since about 1831 and has survived multiple wars, regime changes and upheavals. No one has jurisdiction over the shrine. The Soviets repeatedly cleared the site, but people with crosses always returned. Pope John Paul II visited in 1993.

People keep visiting and leaving crosses. How many crosses? Who knows, maybe more than 100,000. Taking a look at the layout, it's obvious that a true count would be impossible.

Heading up the Hill. 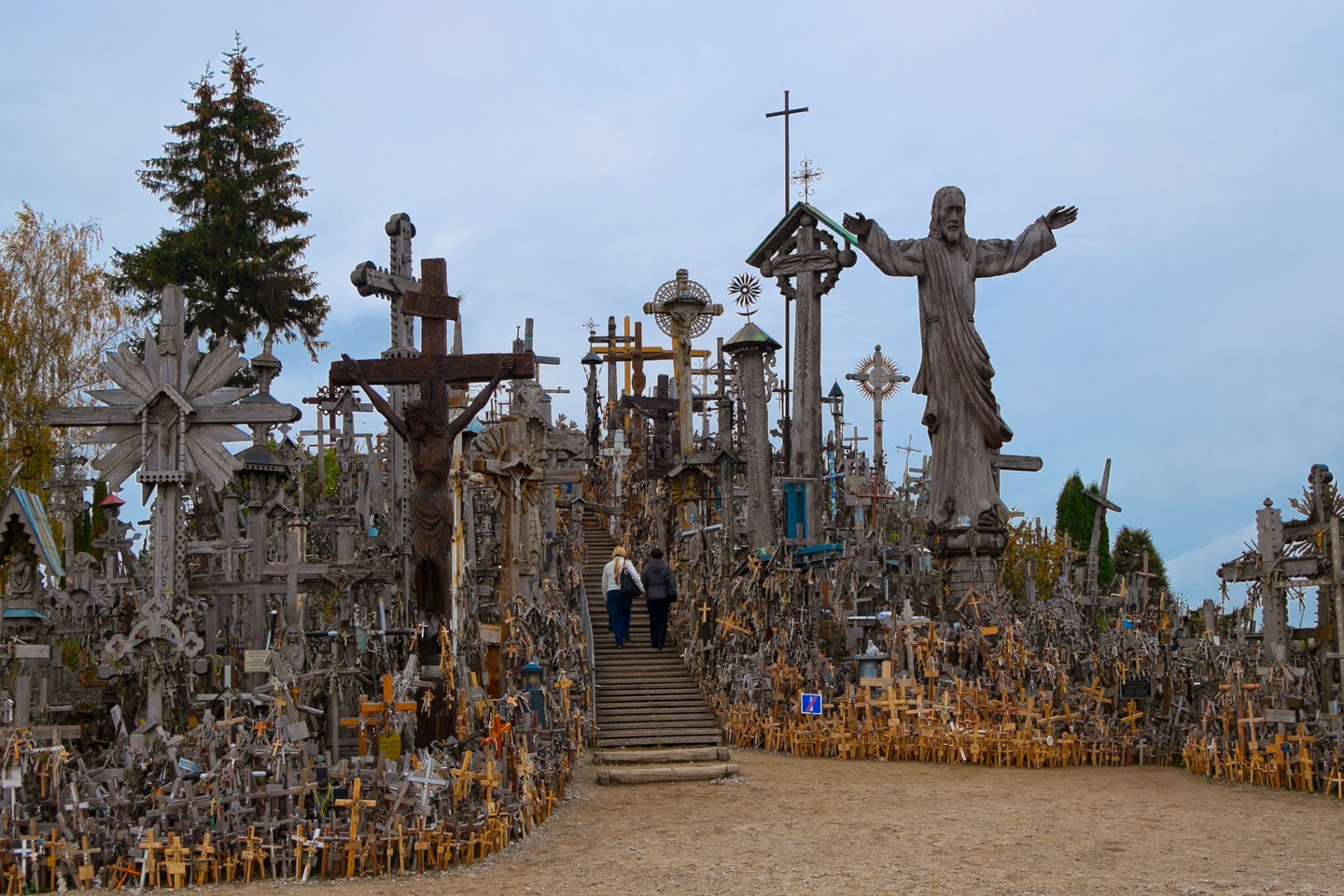 It's a folk art mashup, a mix of religious devotion and symbolic anarchy.

People have hauled substantial pieces to the Hill. 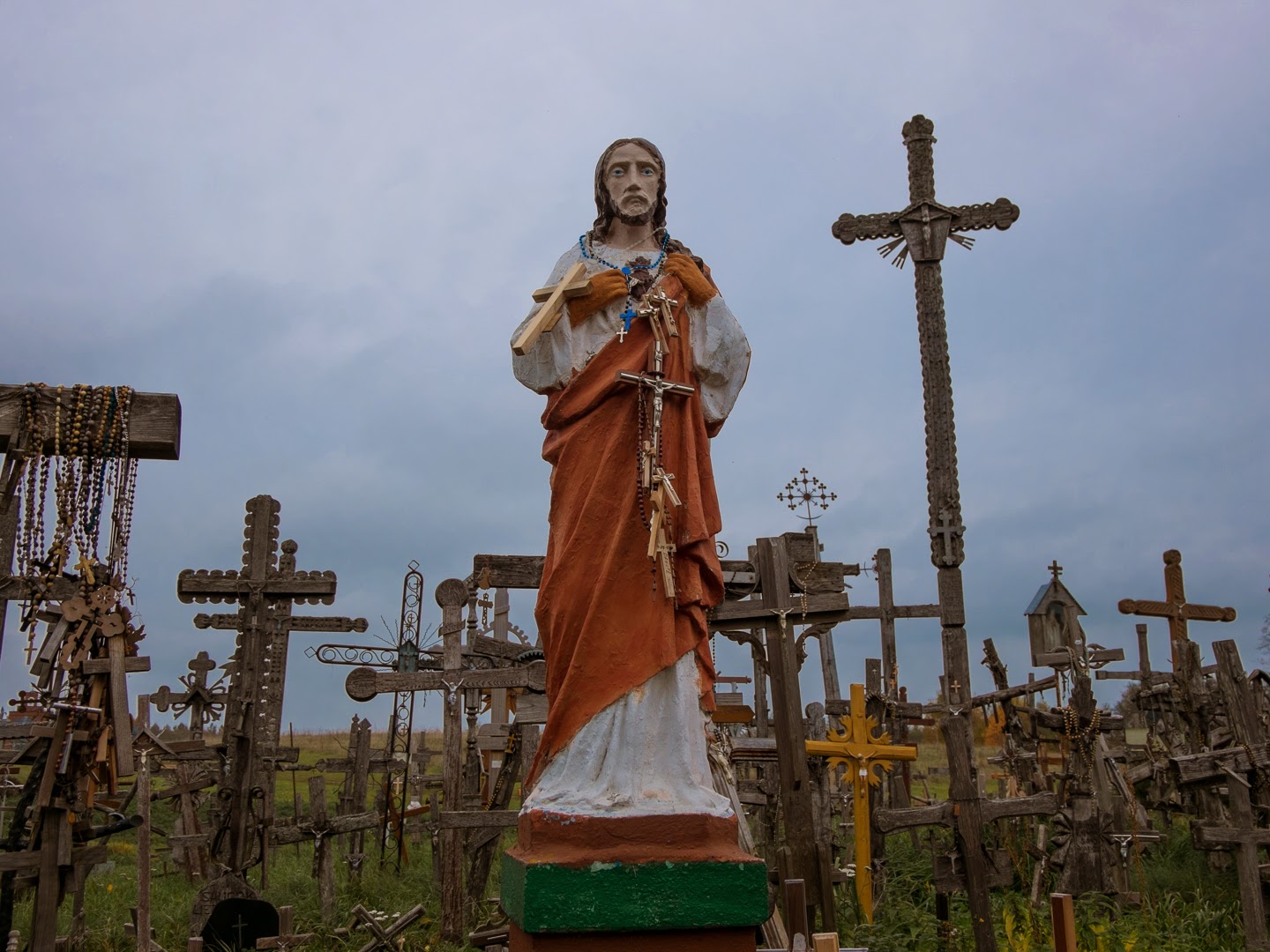 A table turned into a shrine and more crosses, hemming in dirt paths.

View from the side.

Jesus as super hero and Mary among the crosses.
Ready to start counting?

In Kaunas, there's a great Devils' museum (could there be a bad one?), an impressive place to visit and check out hundreds and hundreds of devil figures in a wide range of styles and themes. One innocent painter's (Antanas Zmuidzinavicius) casual collection turned into a three-story museum. Be careful what you start hoarding.

One of the galleries, looking innocent enough. Time to get a closer look.

The devil isn't so bad. He dances like Astaire; he can bring you a drink.

Maybe he sits for a lovely portrait? 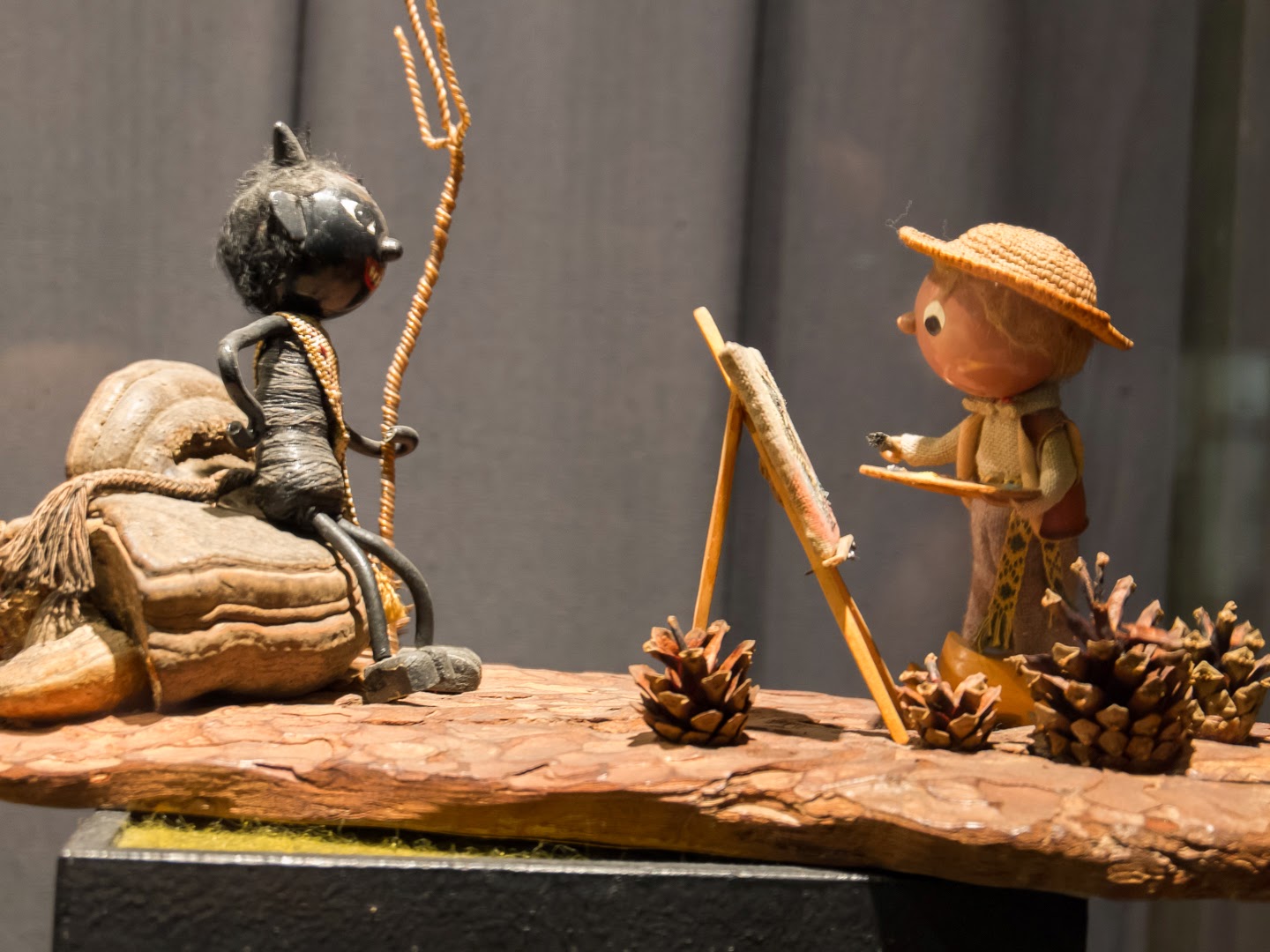 Ugh oh, the devil will tell you when you've had enough to drink. When? Never! Devil inside a devil's foot? Now we're getting creepy.

Time to get the devil under control, by tail and by horn. 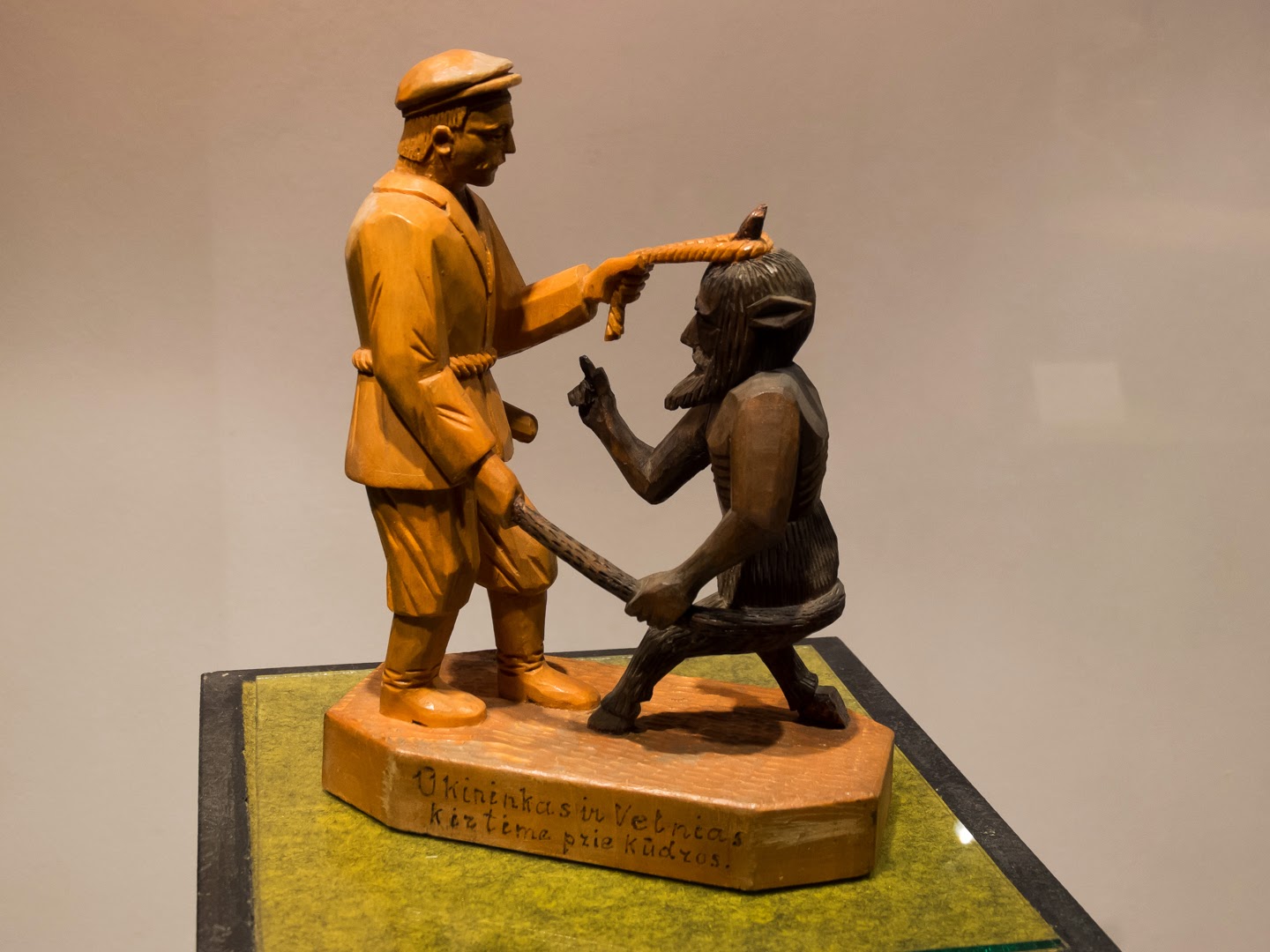 More vices, how about smoking? Time to listen to the winged, accordion-playing devil.

Devil scene at its Zenith: Stalin chasing Hitler over a world of skulls. 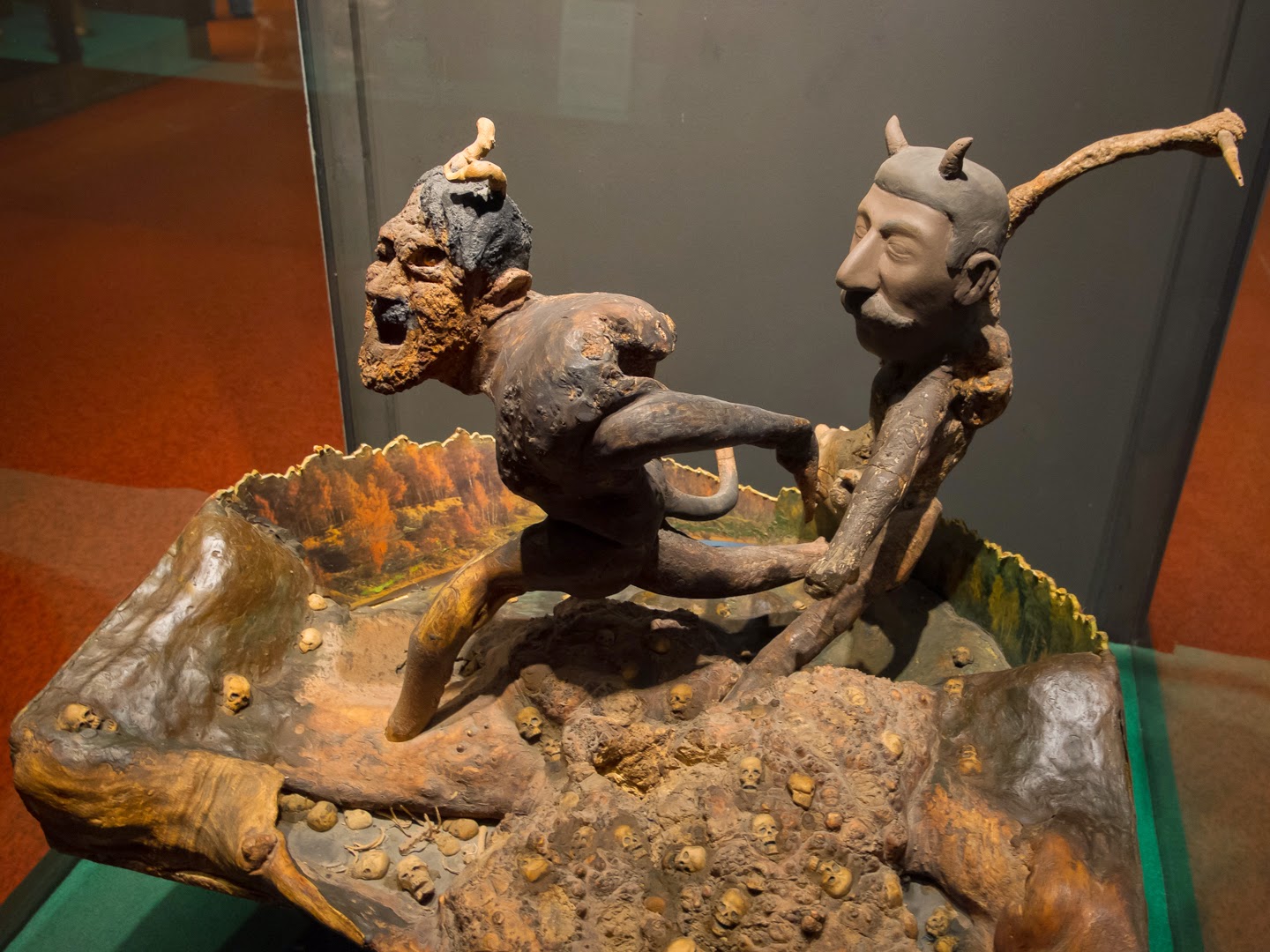