Singapore has realized that its future partly depends on its rich past. A city forever re-developing and staying modern risks losing its soul if it bulldozes its heritage. The Chinese in Singapore form a big part of the city's history and they're now recognized in a nice cultural center in Chinatown.

Similar to New York's Tenement Museum, The Chinese Heritage Center tells the story of a poor immigrant population's journey from arrival, terrible working and living conditions and onto eventual prosperity.

The center is in, where else, the center of Chinatown. A typical photo of the old neighborhood.

The buildings are called shop houses for their combination of shops on the first floor and housing on the top floors. Here's a tailor's back room on the ground floor.

A mockup of a typical Chinese cafe. The tailor's front room, open to the public.

The upstairs? For most immigrants, endless tiny rooms made for dozens of poor laborers, similar to tenements on the Lower East Side of New York.

The most manicured botanic garden in the world? In Singapore, of course. The city-state is obsessed with order and somehow it has been able to tame the tropical jungle that makes up its beautiful botanic garden. No weeds, bare patches or stray branches are seen. Just lovely expanses of plants, green, and textures. 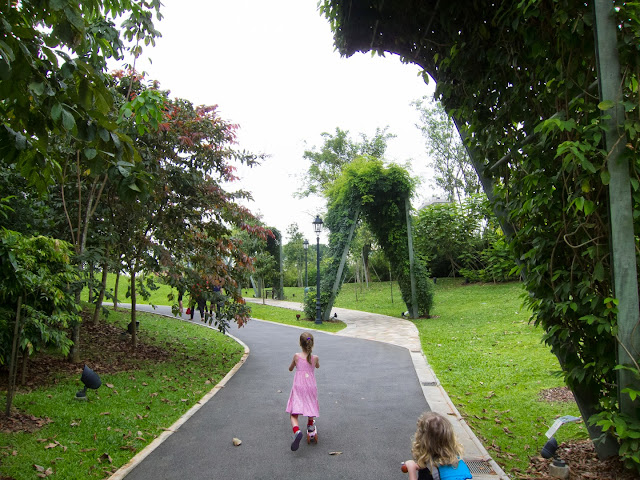 There's a nice play of non-plant patterns to play off the natural beauty. 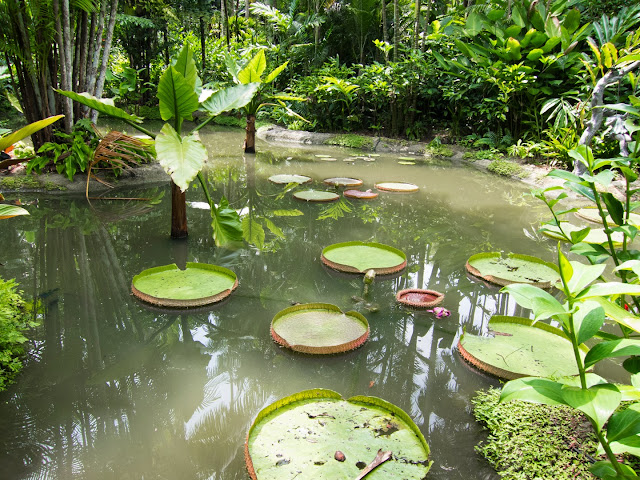 The hardscape also offers up nice viewing.
A final look at the richness of the botanic gardens. 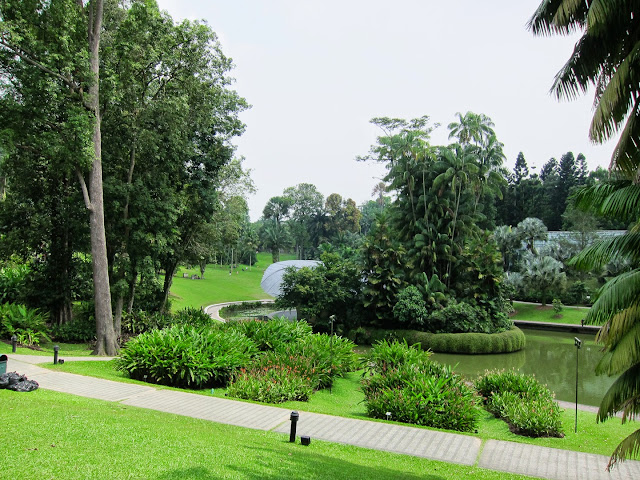 If you want to see the future of many Asian (and world class) cities, head to Singapore. The small city-state is obsessed with managing its prosperity and controlling growth. What it gives up in spontaneity and organic development, it makes up in master planning.

The modern skyline, largely re-made in the past 25 years. Hello banks!

The anchor of the other side of Singapore's downtown, the mighty Marina Bay Sands hotel and shopping complex. It features the largest infinity pool in the world along the top. The large, white lotus flower building is a science museum.

After tearing down many old neighborhoods, Singapore wised up and has started to preserve its rich architectural past. Plenty of tropical colonial buildings are now restored and re-used. 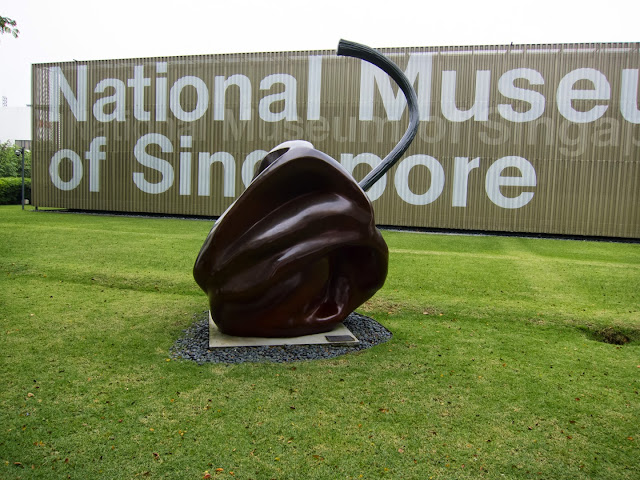 Singapore is typical of most south Asian cities: hot and humid. The new public gathering spaces are the temples to shopping - malls, giant malls. How about a roller rink and a canal with boats?

Other cultures have their own architecture in Singapore, from Chinese shop houses to a south Indian temple entrance, a gopuram. Probably the cleanest gopuram we saw anywhere.
Just how planned is the city? Head to the Singapore government planning office and visit their own museum to get the full idea. One look at the giant 3D map gives you the sobering answer. 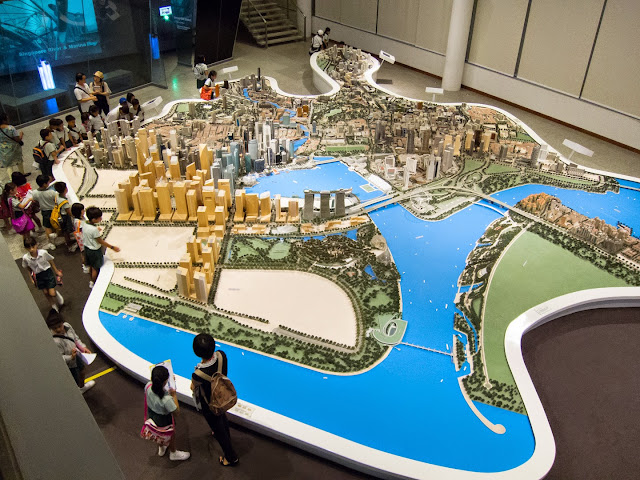 About 30 kilometers west of Muscat is a famous scenic road, the Rustaq Loop. It's a beautiful drive, combining small towns, wadis, dramatic mountain backdrops and a few restored forts. One of the more impressive forts is the one in the town of Nakhal.

Rumor has it the origins of the fort are pre-Islam. It's been rebuilt, remodeled and restored many times, most recently in 1990. But there's no WiFi. 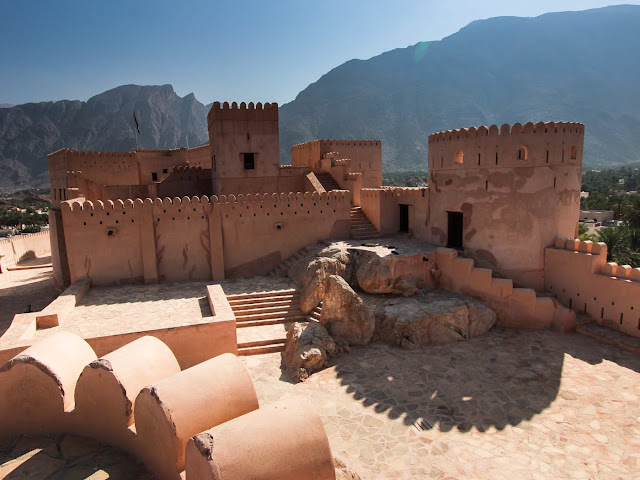 Two more views of the fort, blessed with a backdrop of mountains and a foreground of date palm groves.

More details of the fine fort.

Overlooking one of the date palm groves, spreading to infinity. 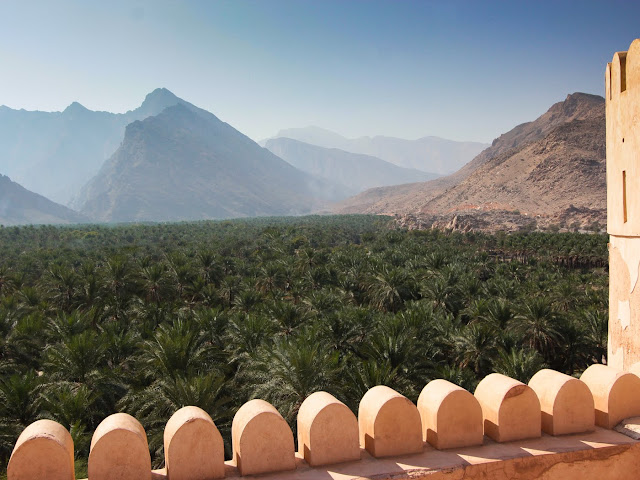 Interior rooms, a close imitation of a rustic B&B.

A final look at Nakhal's fort.

Rambling Along The Rustaq Loop In Oman

West of Muscat by about 60 kilometers is a fine desert drive, the Rustaq Loop. Yes, a circular, meandering group of roads that hit lots of hotspots, both natural and man-made. One of the more impressive features is the Nakhal castle. Otherwise, there are ruins to see, many palm plantations and unadulterated rocky desolation to appreciate.

An old home, crumbling among the palms. 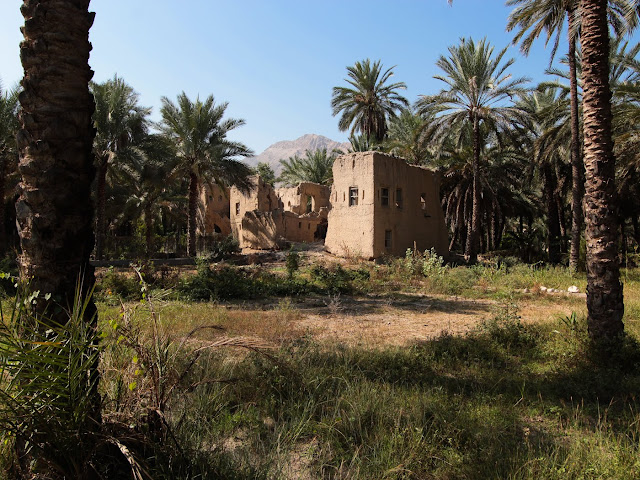 A dry riverbed, palm plantation and uninhabitable hills in the distance. Desert doors.

A student, hanging out by the Ain a'Thawwarah spring. 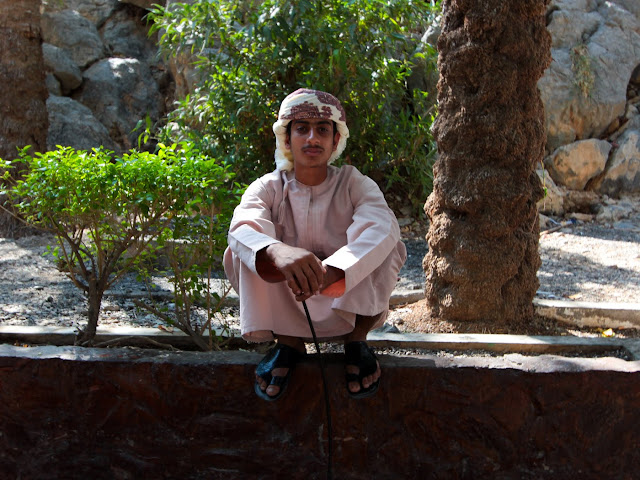 As long as a falaj exists, so can palm plantations. The irrigation makes the oasis possible in the middle of the desert.

No water, no nothing, just undisturbed desolation (save for the modern road and our lovely air conditioned auto). 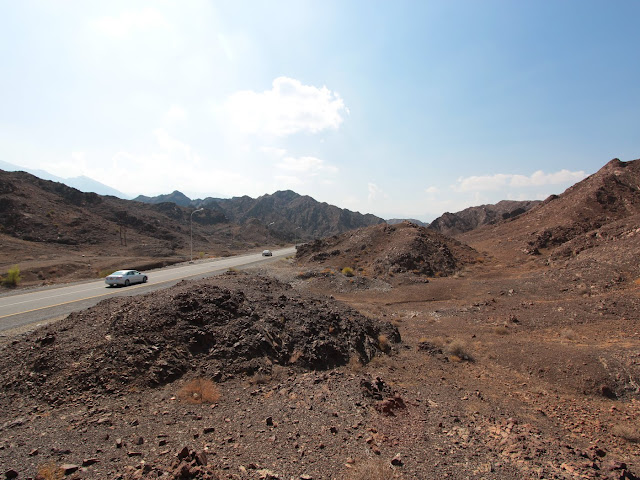 Sounds (and looks) just like a ruin out of Raiders of the Lost Ark, doesn't it? Right, that was Tanis. Close enough to feel the comparison. There's nothing like getting your history all wrong from B-Movie sources. This Tanuf is a small ruin about 12 kilometers north of Nizwa.

While old, the town in ruin is actually a fairly recent event, having been bombed by the RAF in the 1950's in a Sultan-Warlord dispute during the Jebel war. We know you remember all the details.

One of the ruined houses. 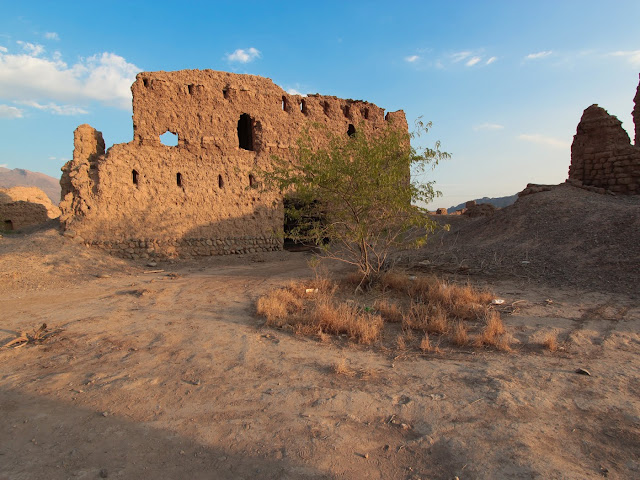 Nearby in the Wadi Qashah are a couple of graves. 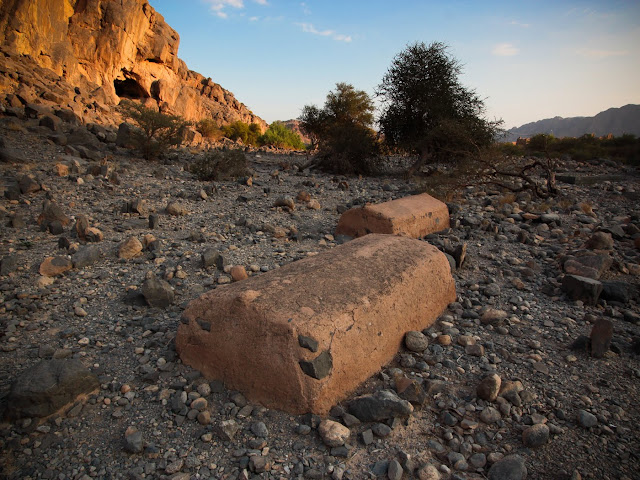 Also in the wadi is an impressive elevated falaj, producing water so pure that it's one of the more popular bottled waters in Oman. It's the wall-looking thing on the left. An active town has been built right near the ruins. Location, location, location.

Tanuf is also the last resting place of wandering animals. 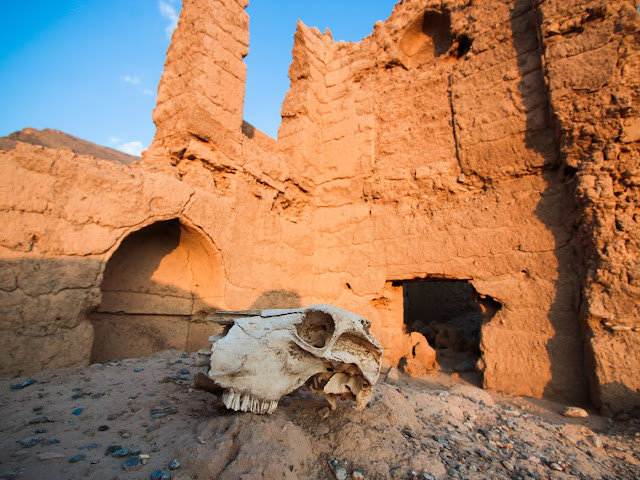 Oman might be a typical Mideast desert country at first glance, but besides oil buried beneath the ground, there's also plenty of water. To move the precious water around, the old Omanis built a complicated system of underground aqueducts called falaj. We're talking pre-iron age construction, just digging trenches, laying stones and letting gravity bring the water to your city and farm so you can sit back and be fed ripe dates day after day.

Outside of Nizwa, you can see one of the bigger falaj still doing its flowing thing. Two more views of the falaj, bringing needed water to the masses. 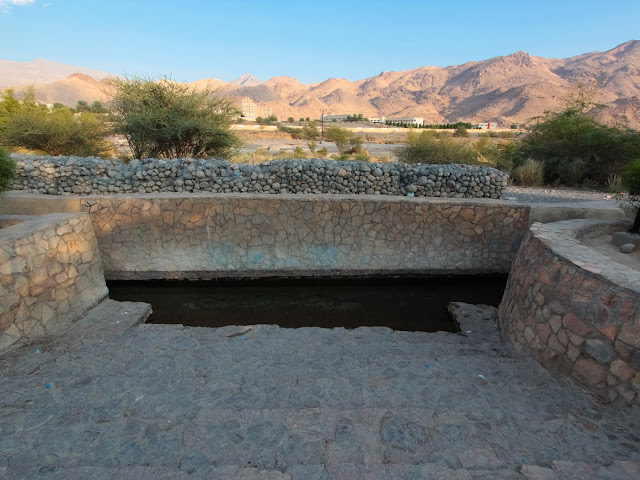 Sarah, for scale, and one last look at the engineering triumph.