In Kolkata, we didn't see any Rabbit trashcans. Maybe the factories are only in South India and Rabbit doesn't hop that far. No matter, we were still able to find a few FORs, Friends Of Rabbit.

Naturally, the state of West Bengal should feature a tiger trashcan. Instead of putting a tiger in your tank, put your trash in a tiger? 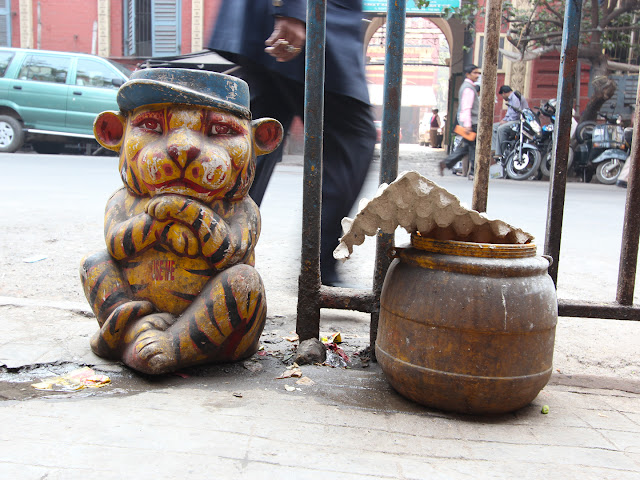 Of course! The best animal trashcan idea ever! Sorry Rabbit, but the pouch is a natural for trashcan duty. Hello Kangaroo. 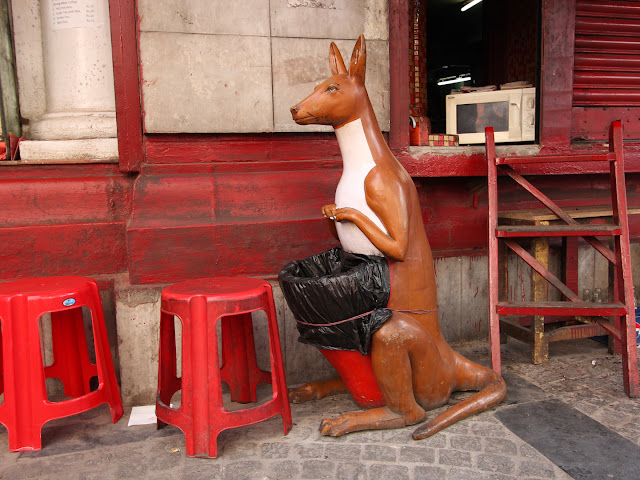 How could you litter in front of a face like Kangaroo? Sarah, posing with a, what? Squat policeman? Some sort of royalty?

Posted by James and Sarah Talalay at 12:00 4 comments:

Tuk tuks and Padmini cabs fill other Indian cities, but yellow Ambassador cabs dominate Kolkata. Being in the West Bengal city feels a bit like NYC with all the yellow flowing through the streets. A pretty sight.

Blue on yellow or yellow on blue? Depends on your transportation mode.

The proud cab driver. Love the heavy guard on the tail light. 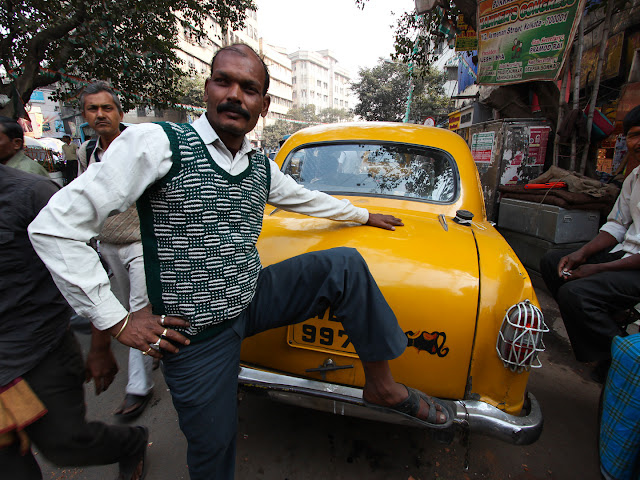 Hopping in a cab can seem like an other-world journey. Grabbing a cab outside the fancy High Court building.

Another natty cab driver, taking a little respite to read the day's paper.

Everyone knows the name Mother Teresa. It's synonymous with selfless sacrifice to help the poor of society. Did you know she lived in a huge mansion and was driven around in a gold-plated Rolls Royce? And ate steak every night, specially flown in daily from Argentina?

Kidding! She was a nun from Albania, who settled in Calcutta, establishing many homes to help the indigent of India. You can visit the home where she lived, worked and is now entombed.

The mission, known as "The Mother House." 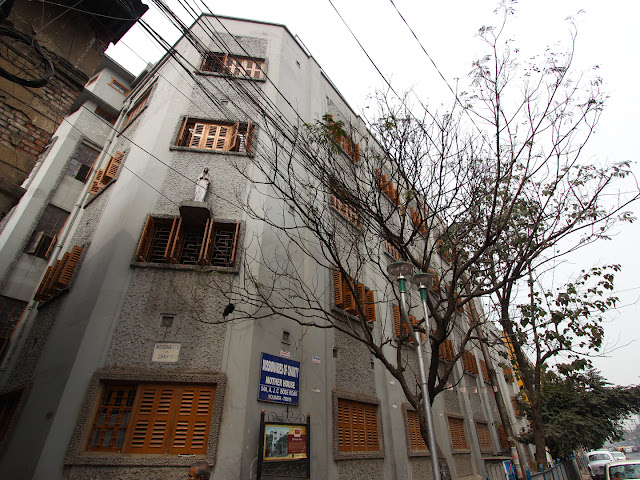 Stick around long enough, make a name for yourself and a street gets named after you. The main courtyard of the Mother House. Mother's stairs leading up to her modest bedroom are on the right.

Signs of warning; signs of direction. Do not spit near Mother! Mother's small bedroom. A pinup picture of the Pope is on the rear wall to the left. No Tivo.

There's an item-crammed room devoted to Mother Teresa's life, mostly illustrated with things that belonged to her. Everything is defined in the possessive. In this case, you can see Mother's toothbrush, Mother's Colgate, Mother's soap container, Mother's rosaries and on and on and on.... 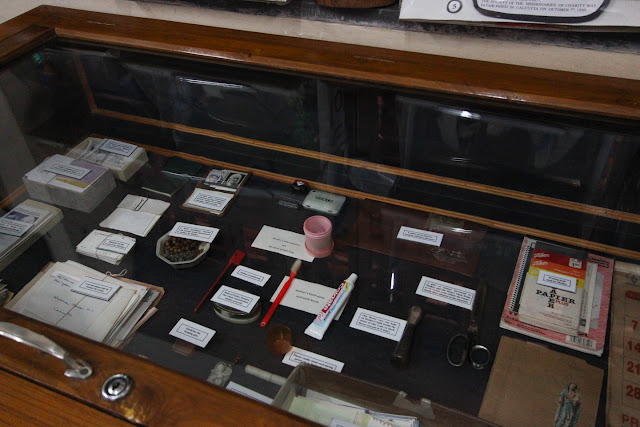 Her tomb, with a fine flowered motto.

A patient nun at the entrance to the tomb viewing area. 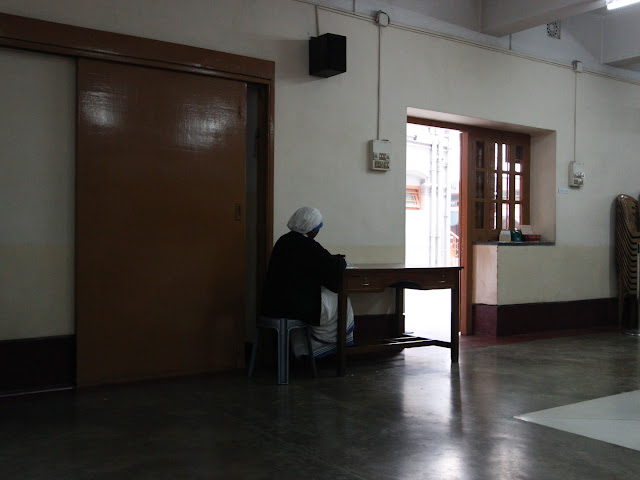 One unique feature of Kolkata is bathing in the street. You don't see many people in other large Indian cities crack out the bar of soap, bring a little laundry and get cleaning. In Kolkata, they still have a network of open taps along streets for anyone to use. Once the water starts to pour, the poor come out to wash.

The classic scene, a group of boys getting clean. 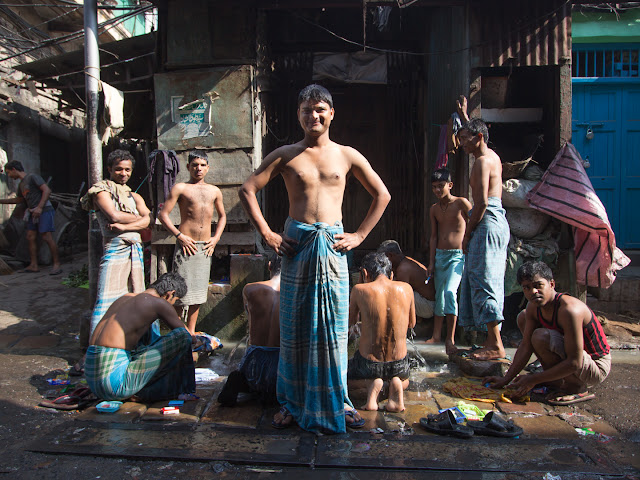 Another use for the water, a man hauling a few liters in an old-school leather pouch. Come clean anything, even your motorcycle.

The taps are everywhere, in front of stores, on corners. There doesn't seem to be a set pattern of placement, the taps are just part of the everyday street scene. 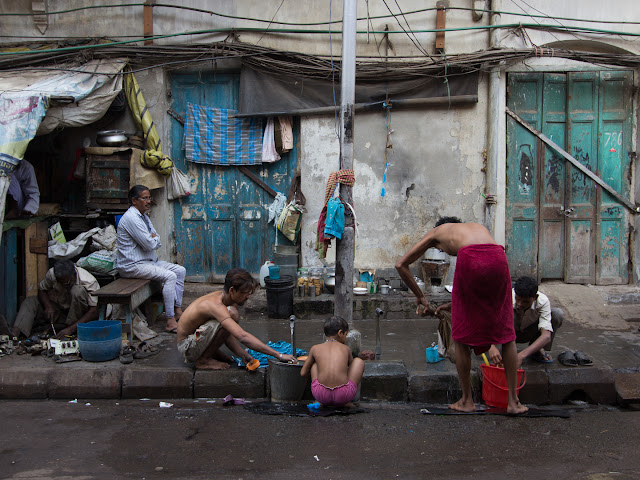 Bringing the buckets, testing the water. Spreading the laundry for a little wash-down.

Then a pop-up for a quick portrait. Clean! 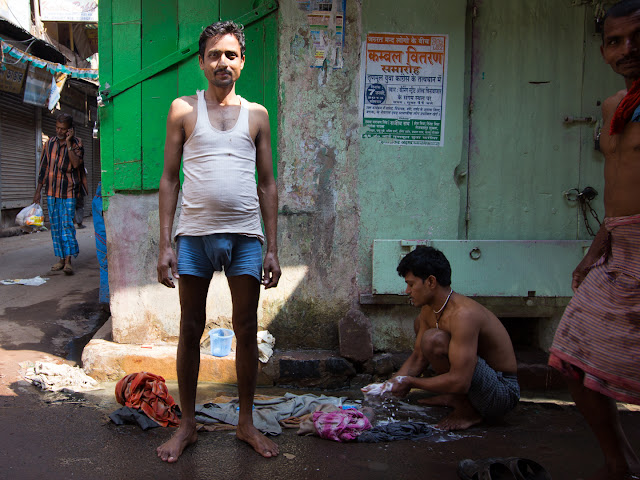 Along the appropriately named College Street in Kolkata is an area packed with book stalls. Lining the sidewalks, filling every shop, nook and inch are little stall after little stall selling any type of academic book imaginable. It takes a college education just to find what you need.

If you can't find what you need, keep walking and looking. 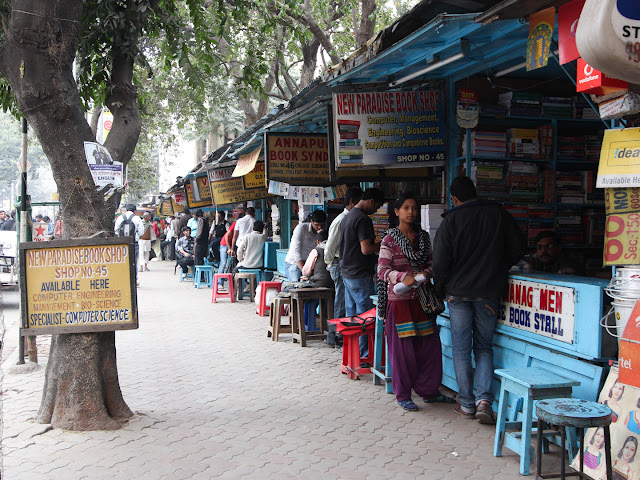 The trick is to have your sign and goods stick out as far as possible to stop the customer. A classic India sight, something overloaded.

Books to the left, books to the right. You can't help but shop in multiple stalls because they're so small. Two steps and you're in another shop. 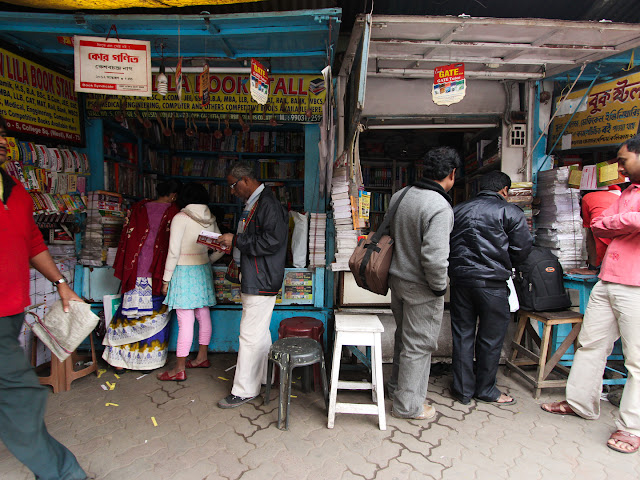 The fight of the signs. One thing in common: the inability to spell competitive. No stall is too small. Is your shop really a house? Maybe more like an apartment, studio or room for rent? 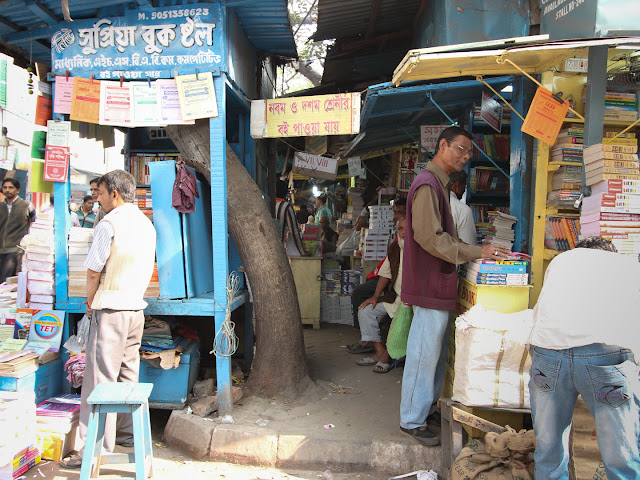 Tucked away in the middle of a bustling maze of commercial vendors in Kolkata is a lovely little Armenian church. It's an old place, dating to 1724, and is a good reminder of the reach of Armenian traders, probably from present day Iran.

The current Armenian community is tiny, but the church is in great shape and there's still a small school as part of the complex. It's a great place to visit, see a bit of history and get out of the fast-paced Kolkata commercial scene for a few minutes.

Entering the courtyard, the church appears. 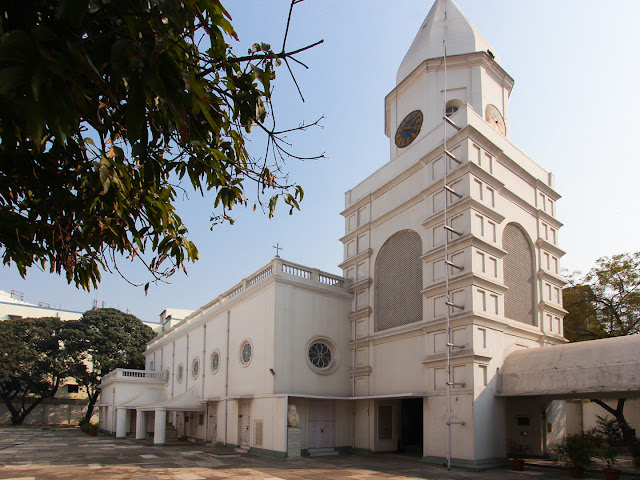 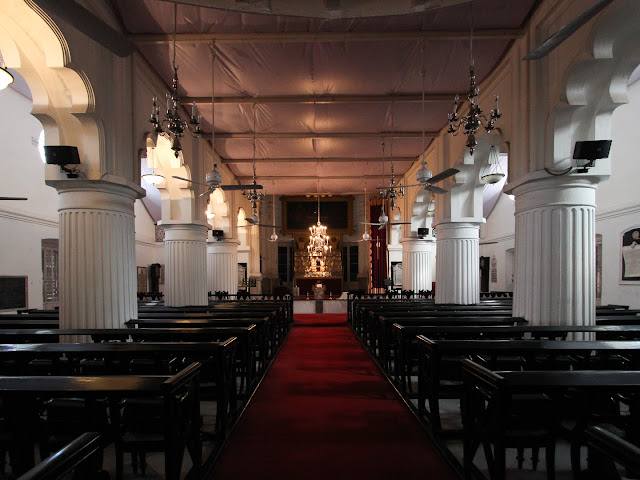 As with other old churches in India, graves become part of the paved area around the church.

What's a college area without its iconic hangout place? Cheap eats, spartan decor, revolution brewing inside every over-caffeinated co-ed? In Kolkata, right smack on College Street no less, is the generically-named Indian Coffee House. It's actually a country-wide chain, but the outlet in Kolkata is full of history and accompanying patina. 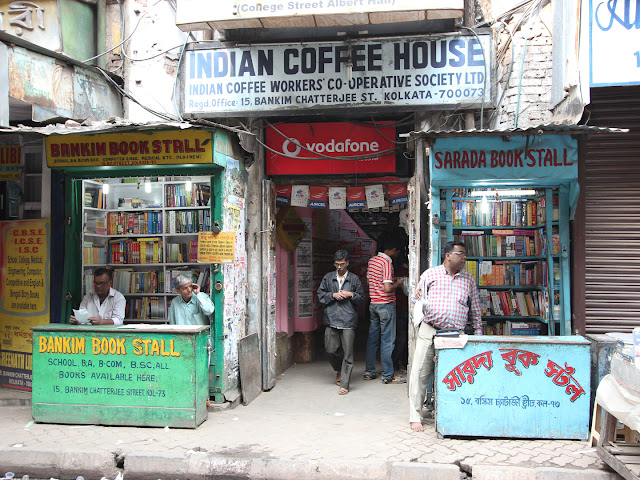 Berkeley, Greenwich Village, the entrance could be anywhere large numbers of textbooks are sold.

The former hall turned into a coffee house. 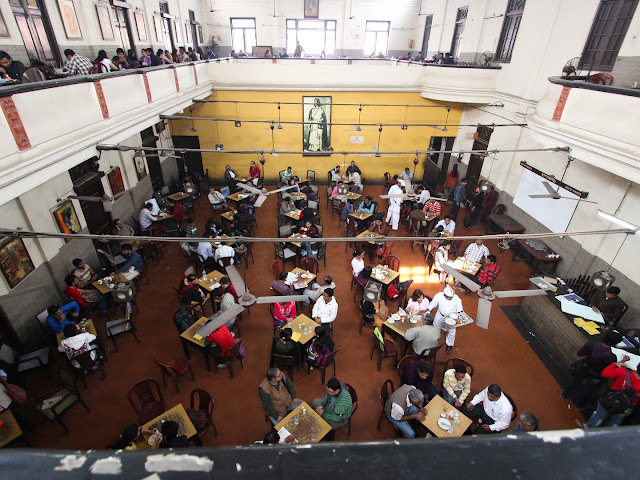 Hey, the place attracts a tourist now and then. 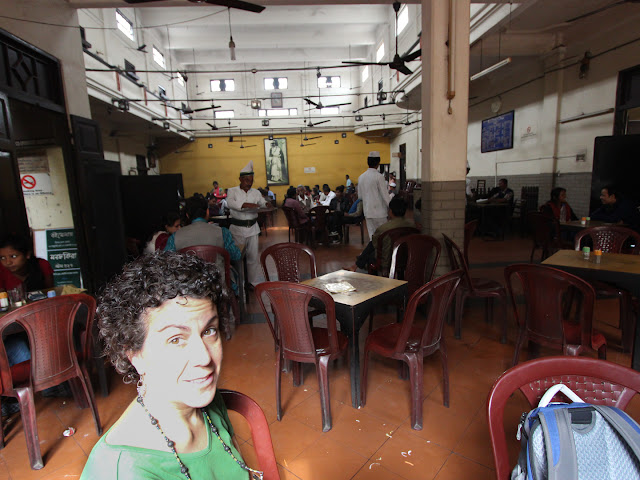 Animals At The Kolkata Indian Museum

So many species to see, so little time. There's a section at the Indian Museum that looks like some big game hunter's jumbo trophy room. Full of large skeletons and stuffed wild animals, the vibe is more Teddy Roosevelt than teddy bear.

Looking a bit like the set in Bringing Up Baby, switching out dinosaur bones for whales. 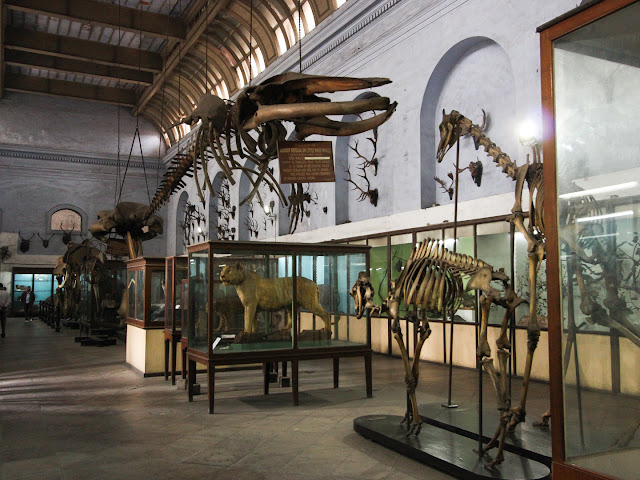 A giraffe head. Nice primary colors display background. A couple of vultures chomping down. On what, exactly, we're not sure. A deer? And what's the snake thing the bird on the is right eating?

Rhino in a box, a very large box. 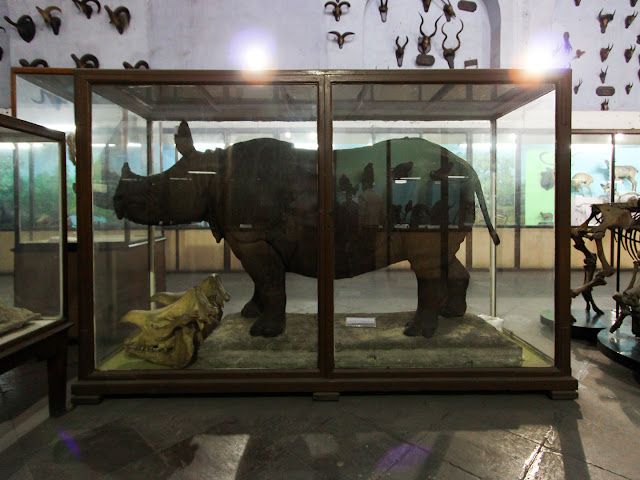 A lot of the animals had superlative names. Here a baby and a barker.

And then a modern and a lesser. 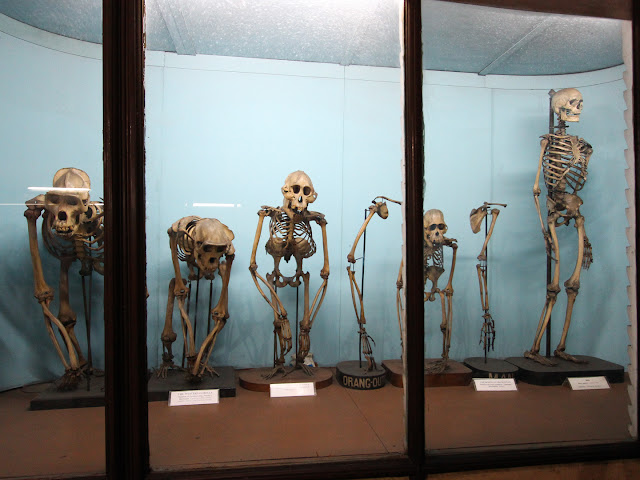 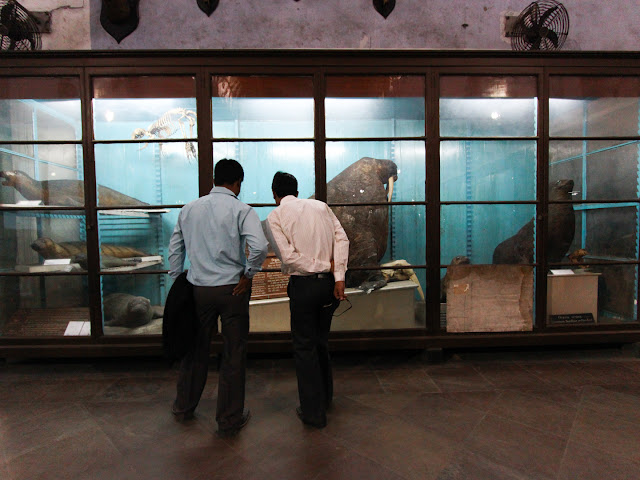