As one would expect, most channels are filled with elaborate musicals.  Then there are the over-the-top music videos dripping with huge dance numbers and silly telenovela-like soap operas -- both taking their style cues from Bollywood.  There are also tons of competition shows in the "Idol" vein.

Filling out the programming are a surprising bunch of news yap shows like the type on Fox or MSNBC.  Just imagine how many talking heads are available in a country of 1.2 billion and you get a pile of mind-numbing, quick-talking, garish, graphic talkathons.  Maybe those shows are a sign of a vibrant, albeit, sometimes corrupt public life.  Or as Woody Allen says in Stardust Memories, "I'm for total honest democracy.  I also believe the American system can work."  Easily adaptable to India.

Those shows are in Hindi, Tamil, Telugu and other Indian languages.  For the English language channels, we get the expected exports from the US and UK.  CNN, BBC, Discovery, HBO, WB, TCM, FX etc.  Psssst, ruin their reputation:  HBO runs commercials.  Tons of them.

English language programming really comes down to two similar genres.  Action movies and nature shows that are heavy on hunting animals.  It's all about the killing -- human or beast -- the language that's spoken universally around the world.  Throw in the occasional funniest home video (silent movie descendent) or car/factory (how-to) shows and that's what's on TV.

There is one exception.  On one of the English channels, we actually get an India-based show.  It's great. 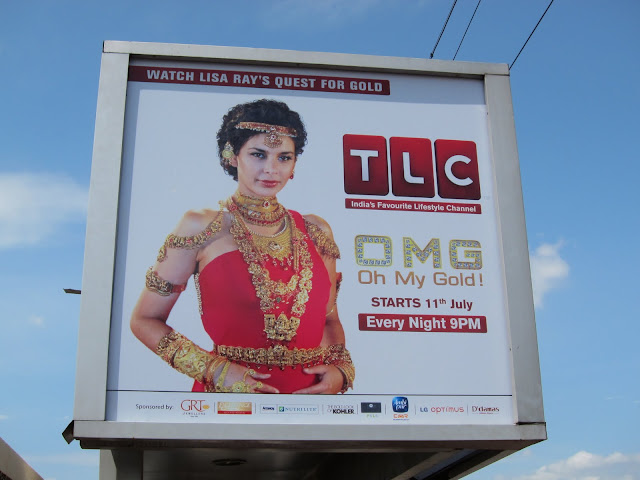 Our hero, Lisa, travels around India, visiting various jewelry stores and shops selling wearable items that contain gold.  She tries on a pile of the stuff,  makes sure to shout out prices and then moves on to more establishments. Week after week.  Robin Leach would be so proud!
Posted by James and Sarah Talalay at 09:15 1 comment: Links to this post

HTemp:  35c
Rain:       8.9cm
`-$:         44.20
On the way to Mamallapuram, we stopped at Dakshinachitra, a sort of Williamsburg of the state of Tamil Nadu. It's a combination arts complex, historic compound and research center.
The buildings -- or heritage houses -- represent the various regions of South India.  The 17 buildings were purchased, dismantled and rebuilt on the sprawling Dakshinachitra campus.
There were several craftspeople hawking their wares.  Here, a woman demonstrates a paper toy.  Exterior of a merchant house.

The real deal: madras fabric.  And don't you forget it.  Who invited Elvis Costello to the Turban demo?

Funky sculpture abounded.  Funkier sculpture could be found in the gift shop.  Who wants a fish slasher on their bookshelf?

Posted by James and Sarah Talalay at 11:42 No comments: Links to this post

Some of you may remember Rabbit Hole.  If not, click the link to check him out.  Got it?  Good.  He's back.  He's a different color and he brought some new friends.

Why so blue, rabbit?  Is it because you're now in a gas station intsead of a park and the trash is worse?  You've still got that look.  And where'd you find the proud penguin?

The widest mouth bass of them all?  Hello albino chipmunk, your fly is open.

After watching James shoot photos for awhile at the gas station, the attendants wanted in on the action.  Before you knew it, the penguin had a crew.  And then it got silly once the rupee roll came out.  It's all about the Gandhis. "Yo, straight pumpin', yo."

Posted by James and Sarah Talalay at 09:29 No comments:

We went for a little ice cream on a recent Sunday.  One can get pre-packaged frozen-cone treats at a lot of small establishments, but ice cream stores are somewhat rare.  A treat is indeed a treat.
A mini-oasis amid the ever-crumbling, chaotic neighborhood.  The demographic shows up the world over.

Typical flavors expanded to include the likes of musk melon or rajbhog. with a topping of kesar sauce.

Similar to Cold Stone Creamery-style parlors, they had a wall of combo creations.  Unfortunately, a couple of menu items drifted into political incorrectness and an homage to an infamous movie bomb.  Lost in translation?

Fitting for the "make work" ethos of India, a separate "billing" line.  The cashier.  Finally, the ice cream!

Posted by James and Sarah Talalay at 10:55 No comments: Links to this post

HTemp:  34c
Rain:       6.9cm
`-$:         44.01
We're not overrun, but cows are everywhere -- right here in the city.  They seem to belong to the streets, but if you do a little observation, you find they do have homes and caretakers.  It's just that the street is their pasture, and no one complains.  Such is the privilege of being holy.
Calves on the street; cows on the street.  This little herd was right outside our apartment, drifting down the lane.
Cows at construction sites. Cows eating trash -- a common sight (when the goats haven't claimed that "turf").

They do have a home.  Here a man is busy milking a cow right in the back of a store on the main commercial street near our apartment.  Does the milk get any more fresh?  Sarah with a cow imitating a Cuyp pose.  He would have been inspired. 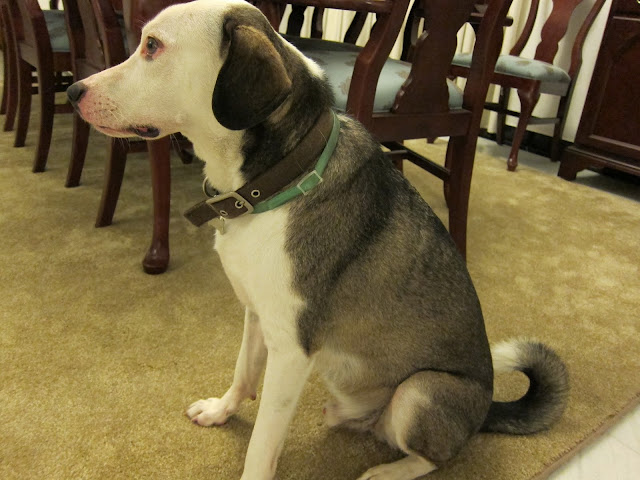 Posted by James and Sarah Talalay at 11:16 4 comments: Links to this post

The mall, of course.  Chennai has a few American temples and the developers have done a nice job re-creating the classic design:  multi-story, bright lights, glass elevators, center atrium.  And shopping, shopping shopping, brand names, brand names, brand names.  Stepping inside one of these malls feels like you're getting perilously close to being on the set of The Truman Show.
Sarah was among a group of consulate employees helping to host a "Taste of America" festival, complete with ice cream eating contest and USA trivia.  As you might have guessed, examples of America's taste included McDonald's, Subway and Baskin Robbins.  The red, white and b(alloon)lue was on display.
One store was different from the usual Banana Sports Republic Authority, the equivalent of the tuxedo shop.  The Indians know the penguin look is for the birds.  We've been warned about the inevitability of us getting "Delhi belly." We guess it was inevitable that it would also become a motion picture.  Looks bad all around.

Well lookee here, who's shilling for Omega watches?  Did they think they could lay low in India?  In Chennai?  8 million people and no one would tell?


Sarah with the SubMan, whoever that is.  Which department store translated its name into Tamil?

English, of course: Marks & Spencer.
Posted by James and Sarah Talalay at 11:15 No comments: Links to this post 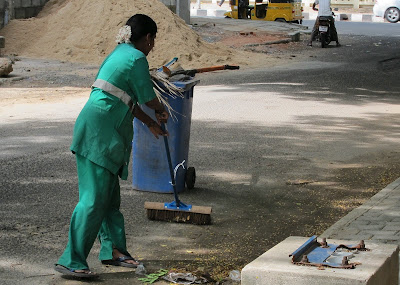 We know women bear the brunt of cleaning this country.  It's no surprise to see them sweeping everywhere, even for the official municipal cleanup crew.  But that back-breaking work seems to be only the beginning of hard work for women.  Here in India, it seems your skill set trumps your gender in the jobs you can land.  Or maybe employers know women make better workers.  They're out getting dirty, moving heavy loads, bringing home money to better their family.  The men, well...

Construction sites are mostly filled with men, as one would expect, and they're working hard bending rebar, plastering, doing masonry work.  But the tough hauling seems to be reserved mostly for the beauties of burden.


Woman mixing concrete.  Notice the ring on her head used for balancing the impending load.  Two women at a pump, filling up with the water they'll need for the day.  This pump isn't some rural outpost -- it's right around the corner from where we live, along a main commercial street.

And the men?  Once you reach the rung to hold down something less blue collar, you grab it and sit on it. Here's a typical watchman at a construction site. 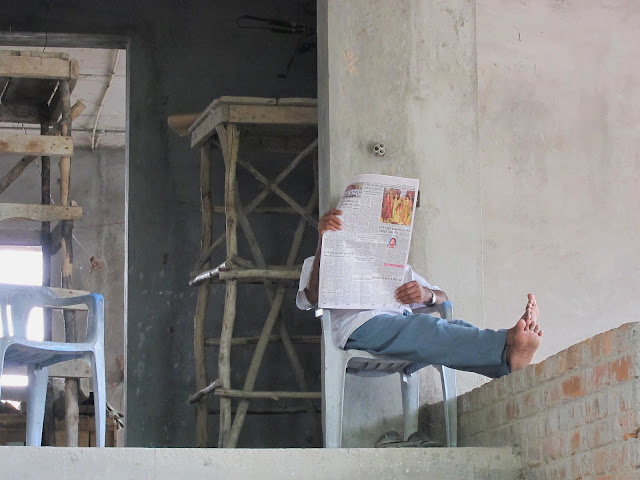 Posted by James and Sarah Talalay at 09:29 No comments: Links to this post

HTemp:  36c
Rain:       0.5cm
`-$:         44.34
Another excuse for Consulate folks to get together is the themed event.  Shopping, touring, movies, baby showers, whatever strikes your fancy.  For a dozen of us this weekend, it was tennis.  Let the games begin!
What's the first order of business?  Sweeping, of course.  The field is set; the trophies await the victors. 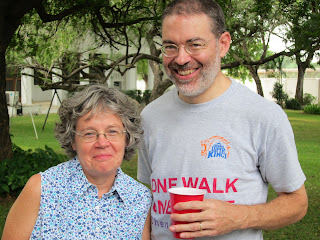 The tournament was held at the Consul General's residence -- where many consulate tennis players spend early morning hours practicing and taking lessons -- not just to indulge our love of mediocre tennis, but to honor our soon-to-depart Consul General Andy Simkin and his lovely wife Bess.  He has been a great boss and they were gracious hosts whom we will all miss. 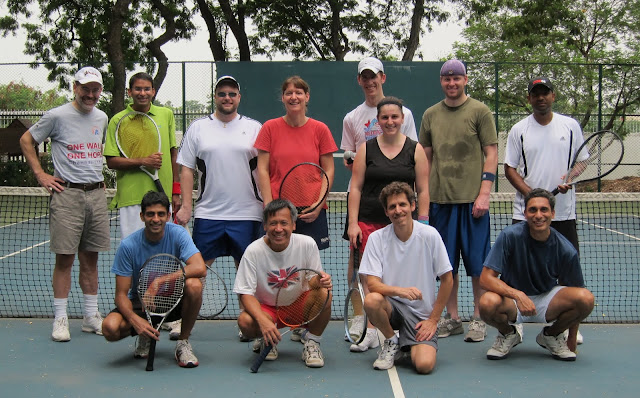 Early energy and dreams of victory.  Watching the action, sizing up the competition.

More fun than games, the spirit of the day.  Team Terrible having a bad game.  We were bounced early.

A cheerleader or two showed up for support.  And the winners were....Kataneh and Peter.  Congrats!

Many thanks to Kataneh for organizing, Andy for hosting and everyone else who helped with the event!


Don't forget to click on photos to see them full screen.  And the comment section has been amended to allow people to post without selecting a profile.
Posted by James and Sarah Talalay at 05:21 3 comments: Links to this post