HTemp:  37c
Rain:       0.0"
`-$:         44.62
On our flight from New Delhi to Chennai, we sat next to a nice man, who was named for the Kapaleeswarar Temple in the Mylapore section of Chennai.  He kindly explained to us that biryani rice is often cooked with minced up cashews and that was the cause of James' allergic reaction to the Jet Airways meal.  He also pointed out landmarks on a map of South India. 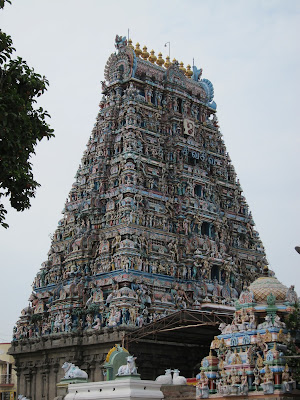 Recently, we paid a visit to the man's namesake Hindu temple, a masterpiece of intricately-carved, brightly-colored figures.  The etymology and design of the temple is quite complicated -- and as usual, there is disagreement about what the temple's features represent -- so if you're interested in the details, click here.

This particular temple with its 37-meter high tower is considered a classic example of Dravidian temple architecture.  Images of peacocks abound, in honor of the Goddess Parvathi. Real live peahens also visit the temple, along with Hindu worshippers. Outside the grounds, vendors sell loops of jasmine that women frequently wear in their hair, coconuts, bananas and other trinkets that worshippers bring to the temple as offerings. One man lobbed a coconut into a round concrete pit, cracking it -- "to smash egoism," our guide explained.


But let's not forget the revered inspiration for all this artistry, which can always be found at the Temple: 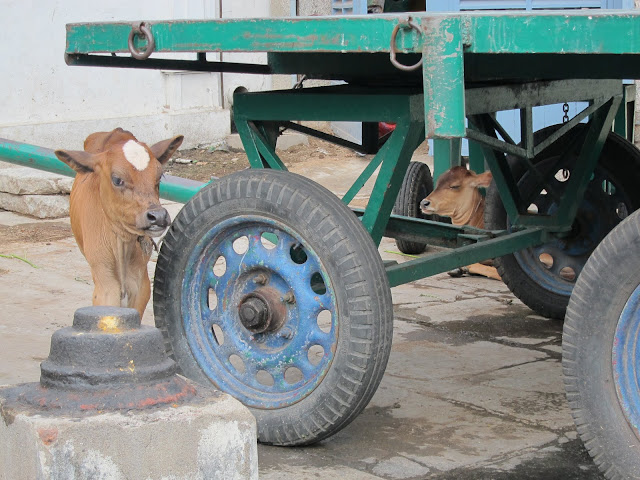 Posted by James and Sarah Talalay at 10:29