In a country of 1.3 billion people, space is at a premium and crowds abhor a vacuum.  And a vacuum cleaner, but that is a subject for another post.  Or 10.  Where were we?  Yes, urban space.

You don't find empty lots in Indian cities.  There's plenty of construction going on, plenty of houses that have been torn down and bigger footprint apartments and offices rising as replacements.  Demand is outstripping supply and there's just no time for land to remain fallow.

Perhaps due to arcane real estate rules or people holding out for windfall sales prices, there's no shortage of buildings left to ruin.  There's no need to maintain a building unless the dollars say so.

Here are examples of typical buildings that are biding time until the wrecking ball appears.  What makes them and other similar structures interesting is their proximity to modern (or at least newer) buildings all around them.


Another building, in the throes of "natural" urban renewal.  The tree growth is busy doing its slow job of bringing the house down.

Our favorite (albeit sad) example of a fading building.  This apartment is in a commercial area of Bangalore, being aggressively neglected, naturally.  One can pause and imagine the building in its glory many years ago. The little balconies, the Asian influenced dormers, the nice roof balustrade.  It's a shame there's no surrounding historical district to save this fine fellow. 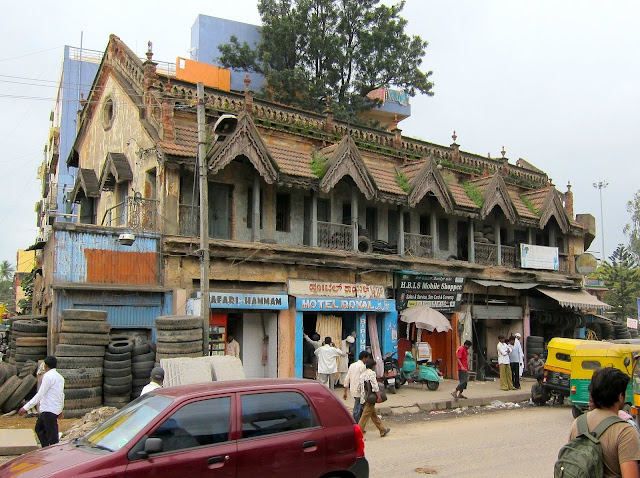 The Grind Of India

It's so easy in the United States.  You drive your car to the giant supermarket, throw some bags of flour in your cart and head home.  Not so in India.  First you go buy the ingredients you need.  Then you have to go get them ground.

Waiting your turn at the grind stall. 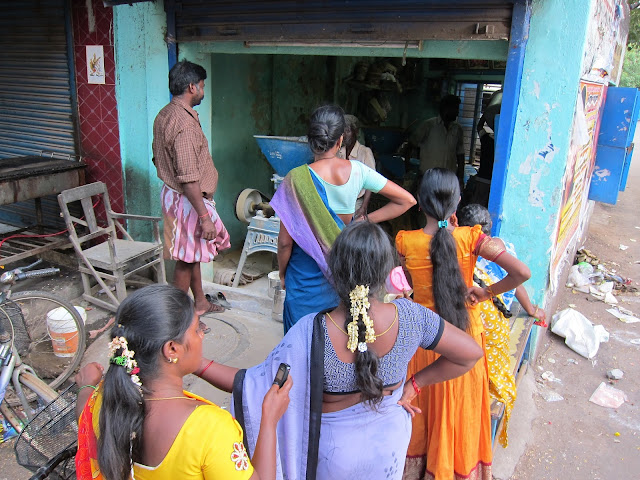 A detail of the grinding process.  It's a dusty business. After about a minute, James had to exit, feeling like he was suffering from smoke inhalation (not that he's suffered smoke inhalation, but if he had, that's what he thinks it might feel like).
Posted by James and Sarah Talalay at 12:00 No comments: Links to this post

A Night Out In Chennai

Recently, we went to two classical dance performances that were part of an Indian cultural weekend called Nritya Sangama.  We got to see a rarely-performed, extremely acrobatic dance performance called Gotipua and a Kuchipudi Ballet called "Chandalika" about an "untouchable."

First it was a quick dinner of made-to-roll spring rolls at a friend's house.


Then, the acrobats.  The remarkable Gotipua performance of the centuries-old dance form is conducted by six to 10 young boys, who dress up as girls and do mind- and body-bending feats.

The ballet group danced the story of Chandalika, a woman who was born into the "untouchable" class and how she struggled with overcoming adversity.

The band was incredible, playing non stop for a couple of hours with members never moving an inch from their seated positions.

We couldn't tell if his bald cap fell into a glass of Tang, was a cone-less Conehead, or was supposed to be color coordinated to the Krishna costume?  A royal disco inferno?  No, more like costumer gone wild.  The looks were fabulous.

Sarah recently bought a couple of saris -- traditional South Indian style.  Saris are six yards of fabric with a special blouse that is cut from the large piece of material and then fashioned by a tailor into a custom fit top.  Sari fabric styles and draping vary by region of India.

Every month to six weeks, the American officers at the U.S. Consulate in Chennai seek the help of local staff to get outfitted in the traditional Indian dress for what's been dubbed "Sari Friday."  Sarah has new appreciation for the traditional South Indian women who don saris every day.


Not to be outdone, James shows off the natty Nehru jacket his parents had made for him - yes, in India - many years ago.  It still fits; it's still stylish. 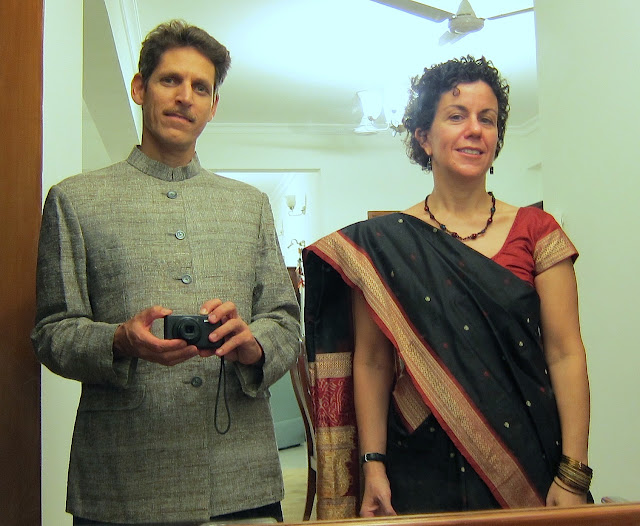 Posted by James and Sarah Talalay at 12:00 3 comments: Links to this post

If You're Going To...Put Jasmine In Your Hair

There are plenty of smells in India - both pleasing and unpleasant.  One of the most delightful is the fragrance of fresh jasmine that Indian women wear in their hair -- particularly in South India.

Several of the local staff who work at the U.S. Consulate wear the pretty flowers in their tresses.  But jasmine is also used as a religious offering -- or pooja -- at Hindu temples.  It signifies divine hope.


Jasmine is prevalent on the city streets and around temples, where people are busy stringing together garlands of the white flowers.

Purple Is On Sale This Week

Improvements are happening everywhere.  There's no reason the bright color palette of South Indian dress shouldn't spill over to buildings.  Yellow was so last year: 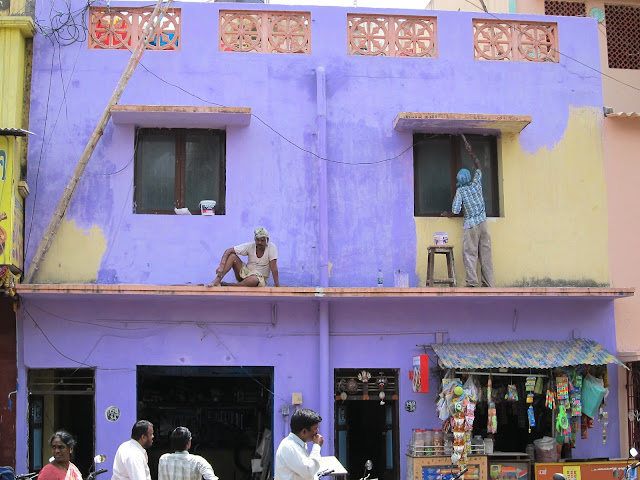 Strung Out In Indian Streets

Just string that anywhere (and how) seems to be the mantra of utilities and other folks busy connecting anything in India.  It's generally a free-for-all when it comes to cabling right-of-way and regulation.  If you can string it, go ahead.  Easements?  Codes?  Upkeep?  Hah! 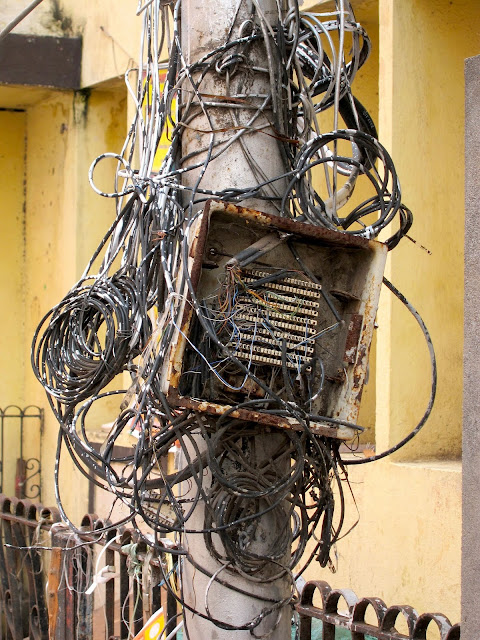 A Face Out Of The Crowd

There are a lot of murals around town.  Many properties -- from parks to colleges to industrial buildings -- have multi block-long walls and the blank canvas is too tempting to leave empty.  Graffiti doesn't cover the walls -- more like disciplined paintings on a specific theme.  We showed you some landscape themes last month.  We'll present more themes later, but for today's posting, we'll concentrate on politicians.

Tamil Nadu elections were held in April and little lawn signs and bumper stickers weren't going to cut it. Why waste money on machine-made banners, when an army of painters is standing by?  The below images were all painted by hand, no silkscreen, stick on, lithograph shortcut.

The woman on the left is J. Jayalalithaa, now serving in her third non-consecutive term as Tamil Nadu Chief Minister.  She's a colorful and beloved politician known as "Amma" or "mother," by her fans.  She was a well-known Tamil movie actress in the 1960s and 70s -- she looked a bit like an Indian Elizabeth Taylor -- whose leading man got her into politics.  We didn't know Jesse Jackson was running for office in India.  Actually, that's MK Stalin, treasurer of the opposition DMK party.


Sometimes your platform is spun as an action figure or maybe you need a lot of copy to get your point across.

Smiles always sell.  On the right, a curious combo of Oscar Wilde, Little Richard?  Maybe a wisp of romance also gets votes.
Maybe you're Joe-Cool Emir with your gold scarf and shades.  OK, that's Dr. Kalaignar Karunanidhi -- a DMK founder and former Tamil Nadu chief minister.  Or maybe you'd better vote for me because you don't want me to come back all angry in my Hulk persona.

It seems fairly normal that utilities such as gas and oil need to be delivered.  But water?  In Chennai, yes.  Due to a combination of poor sanitation and depletion of reservoirs, many people in Chennai have water delivered -- including us.  We're not talking those water cooler jugs.  We're talking tanker trucks.

Here's a small tanker.  And a standard one.
Similar to an oil delivery, the water truck pulls up and hooks in.

The trucks are colorful, almost like giant toys roaming the streets of Chennai.  Spinning a desperate situation into a fun one?

It seems some of the merchants selling snacks and sundries cram their stalls so full you can barely find them:

Which reminds us of these similar photographs from the great Robert Frank and John Gutmann:

Or the Protein Shack?  India is largely a vegetarian country.  There are signs for "Veg" restaurants everywhere and all food items, whether on a menu or packaged, are required to have either a red (meat) or green (veg) dot on them for proper identity.  It's a nice touch for those who need to know.

If you want to buy meat, it's available, mostly from special shops.  Maybe it's not so special, but since it's mostly veg here, the occasional meat shop sticks out.

Meat is also separated by shops.  This sign is for a beef only shop.  The images remind us of old agricultural cow breed posters.

The word "Protein" is a standard identifier here.  On the left is a nice "Still Life with Tuk Tuk" image.  This shop proudly features chicken and mutton.  The pics on the sign look eerily like political buttons or the punk rock band buttons we used to wear.  What would offend parents more today, proudly donning a Sex Pistols (Never mind the ... bullocks... er, sorry) or chicken button?  (Mutton button?  Now we're getting somewhere....)


You gotta have pics of your merchandise, even if it drifts into petting zoo territory.  David Lynch would be proud of the floating chicken in the middle of the sign on the right.