Thank you, dear readers, for indulging our obsession with KL for weeks of postings.  Not to worry, we still live in India and have plenty to share.  Welcome back to India:

Even though nice murals cover large expanses of outside wall space in Chennai, there's still plenty of room for posters.  Combine active party mud-slinging with wall space and you get some good propaganda pushing.  And what better tool to use than a recent visit from a Yankee VIP?

Here's a poster from the current party in power, the AIADMK, with their leader, Tamil Nadu Chief Minister J. Jayalalithaa, lauding Secretary Clinton's July visit.  The poster featuring Jayalalithaa, elected this spring to her third non-consecutive term, shaking Clinton's hand, refers to the local pol as "Amma" or "mother," as she is known by her fans.  It loosely translates to "the mother who collects the world for the Tamil community.  You will rule and guide India in everybody's names." 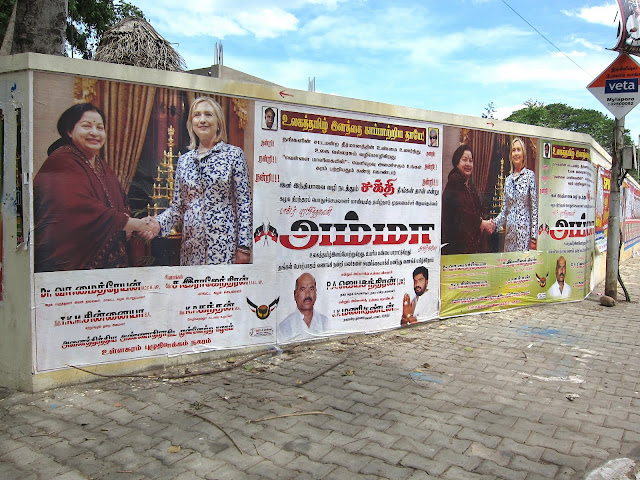 The opposition, the DMK (yes, it's confusing, especially if you're new here), which was beaten by the AIADMK in April elections, is more than happy to return the favor.  Here's a wall of their posters featuring a photo of Jayalalithaa and Clinton: 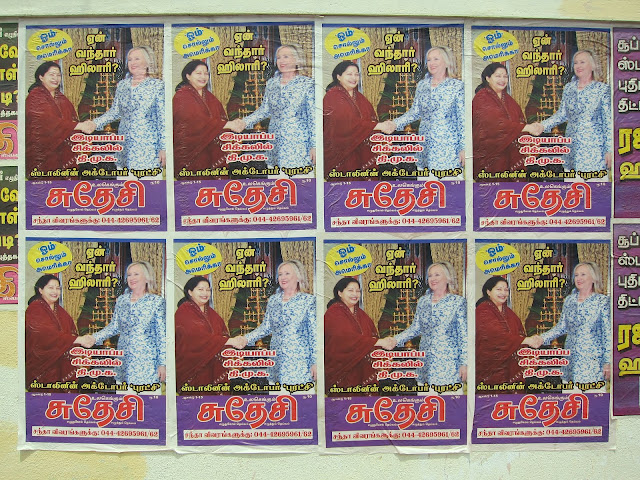 Their poster, which is the cover of a local magazine, uses the Secretary's image to bolster the DMK party and its leader MK Stalin (yes, he was named after the former Soviet leader) asking in a non-flattering way: "Why did Hillary Clinton visit Chennai?"
Finally, to the right is a poor old newspaper that's just looking to use the notoriety of Clinton's visit to move some copies.
Posted by James and Sarah Talalay at 12:00