HTemp:  37c
Rain:       0.5"
`-$:         44.39
Another of the relatively few general tourist stops in Chennai is the Basilica of San Thomas.  Its claim to fame is being one of only three basilicas in the world built where an apostle is buried.  This one is built over the tomb of St. Thomas Didymus -- aka Doubting Thomas. 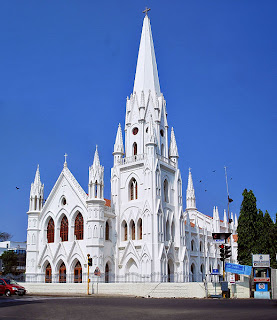 It's a nice old church built in the Neo Gothic style, having been rebuilt by the Portuguese around 1523 and then again by the British in 1893.

Thomas, of course, is known for doubting Jesus' resurrection and demanding to see his wounds.  Thomas only believed after being offered a chance to touch Jesus' wounds.  A piece of bone from Thomas' infamous finger - used to touch Jesus' side - is among the artifacts on display in the Basilica.   It's a little creepy.

Posted by James and Sarah Talalay at 13:37