Electrical power is a challenge in India.  All summer we had rolling blackouts each day at 1 pm for an hour or so.  Additional blackouts occurred regularly.  It's such a random, but frequent nuisance that anyone counting on leading a stable existence must make alternate arrangements.  In a city of 8 million people, you're on your own. We're lucky, we have the State Department as our own Schneider from "One Day At A Time" to provide a back up power arrangement.  Here's what passes as the electrical grid and what you must have as a substitute when things go down.

It's a bit sketchy when it comes to an electrical infrastructure along the streets.  Mini ersatz distribution centers can be found every few blocks or so.  Smaller boxes also dot the streets, mostly wide open and a bit scary looking.
The answer to being powerless?  A big, honking generator, of course.  A perfect example: 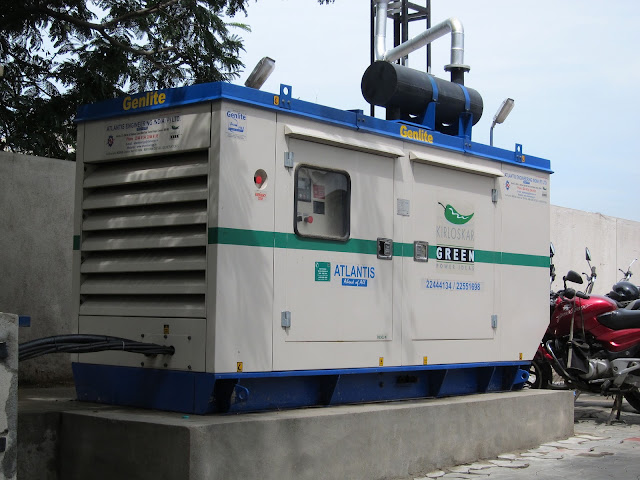 This genni isn't ours, but one at a Nissan dealership.  Any house, apartment building, office tower that expects continuous operation, has its own power, including ours.  It's amazing to see brand new, 15-story gleaming office buildings and then the giant set of generators taking up a chunk of their parking lot.  A powerful statement indeed.