A Look Back At Occupy Oakland 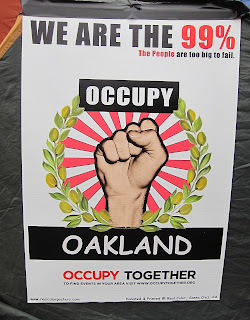 James has been popping back to the United States recently, working on a project for Ford. Look for more information on that job in upcoming posts.

In the meantime, he's been lucky also to pop in to see family. While visiting his sister in the San Francisco Bay area, he had a chance to stop by and see what Occupy Oakland looked like before its Monday dismantling. In a word, impressive. Time will tell if their voices were not in vain.

As you may know, the Occupy movement began on September 17 on Wall Street as an objection to corporate greed, bank bailouts and the power of Wall Street. The movement has since spread to dozens of cities across the United States and has swept up Americans from all political parties as well as movie stars, musicians, writers and educators.

Here's what it looked like in Oakland: filling the park in front of City Hall. A nice orderly array of tents, its own little city.

There's serious organizing happening. The calendar of events area and the kitchen. They're there for the long haul.